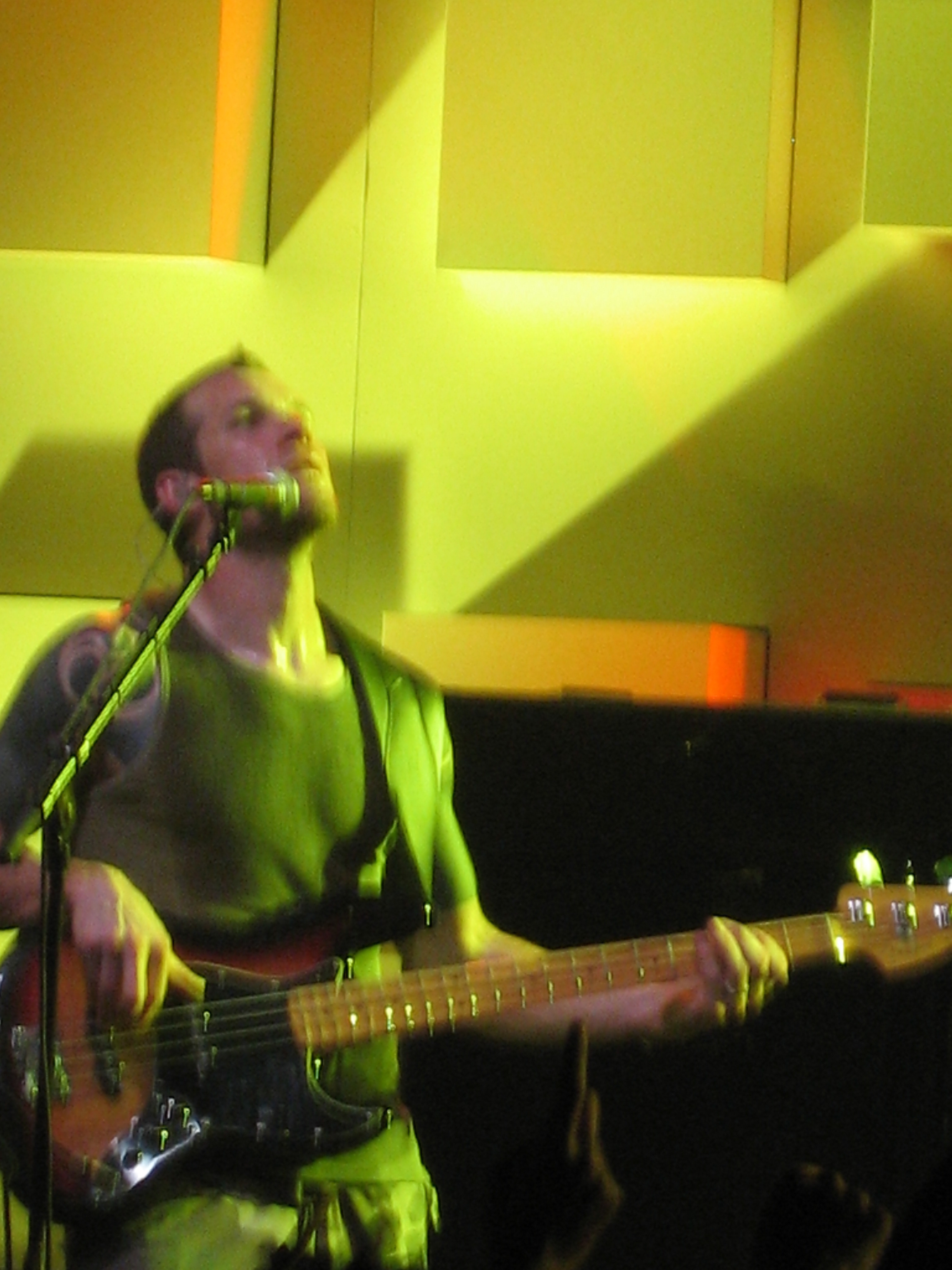 Tim was born the youngest of five children in his middle class California family. His father was an aerospace engineer, and worked on the and his mother was a teacher/.He is of French and Irish descent. When Tim was in fifth grade, he met . Around this time, his mother was diagnosed with cancer. Shortly thereafter Tim's father divorced and remarried, his mother was forced to move to to live with her sister, while seeking treatment. Tim remained with his father, who Tim claims abused him. Around this time (age 15) Zack introduced Tim to bass, and Tim soon found an outlet in music, and poetry. Tim’s mother died of brain cancer in 1988.

In 1993 Tim was introduced to mountain biking by his future father-in-law Jimbo Insko. Tim has since become an obsessive mountain biker, even going so far as to thank all of his bikes in the liner notes for "The Battle of Los Angeles".

In 2001 Tim married his longtime girlfriend Aleece Dimas, who is an AIDS activist and medical professional. Tim and Aleece have had two sons together, Xavier and Quentin, the family lives in , which is well-suited for mountain biking.

Tim is known for his numerous s. His first tattoo was a solid black band around his left arm to remember his mother by. He soon had half of a face tattooed on his back, and various other designs on his arms. [http://i59.photobucket.com/albums/g320/Zorro101790/Before.jpg] In 1993 he began work on an intricate design on his left leg. By 1996 this tattoo evolved into a Westernized or warrior tattoo that now covers over 65% of his body (covering his arms, left leg, chest, back, and two swirls on his posterior). [http://i59.photobucket.com/albums/g320/Zorro101790/culorizado.jpg]

In 1991, guitarist quit his band Lock Up, in the hopes of forming a new outfit. He began to frequent local clubs, and viewed rapping. He soon called , who had auditioned for Lock Up. Zack de la Rocha convinced Tim, who had been a longtime friend at school, to play bass. After frequenting the L.A. club circuit, Rage Against the Machine signed a record deal with Epic Records in 1992. That same year, the band released their self titled debut. They achieved a phenomenal amount of mainstream success and released three more studio albums.

In late 2000, after Tim’s stunt at the VMA’s, the disgruntled de la Rocha quit the band. On , , Rage Against the Machine performed their last concert at the in , . The remaining members formed with former frontman .

On , , the band reunited at the . The band played in front of an EZLN backdrop to the largest crowds of the festival. The performance was initially thought to be a one-off, this turned out not to be the case. The band played 7 more shows in the in 2007 (including their first non-festival concert in 7 years at the in , ), and in 2008, they played their first shows outside the US as part of the Festival in and .

The band has since continued to tour around the world, headlining many large festivals in and the , including in . In 2008 the band also played shows in and ; the locations of the Democratic National Convention and Republican National Convention, respectively.

After left , music producer suggested the three remaining members of Rage get together with former singer , and "see what happens."

By May 2001, they had begun to work in the studio, writing their first song “Light My Way.” By April 2002, the newly formed band had split due to “outside” pressures, mainly from management companies. They soon got back together though, and on , they released their eponymous debut, which would attain triple platinum status. Audioslave attained a large amount of success, and released another two studio albums. On May 5, 2005 Tim & played a free concert in front of 65,000 Cuban fans, becoming the first American rock band to play a concert within .

On February 15, 2007, officially announced his departure from Audioslave, disbanding the band.

Tim Commerford and drummer Brad Wilk contributed in 's side project and his album "" on the track "Momma Sed."

*Amplifiers and Effects: Tim has used a wide variety of effects and amplifier setups throughout his career. Tim began to bi-amp for the recording of Evil Empire, and has since moved to in Audioslave onwards. He primarily uses speaker cabinets and amplifiers and often drapes an inverted over the setup. He is known to tinker with things, even going as far as to build some of his own effects.

*Basses: Tim has used a variety of instruments throughout his career, all of which have been heavily customized. For ’s first studio recording (1991), and ensuing tour, Tim used an . For the recording of Evil Empire (1996), Tim switched to Fender es. In 2008, Tim has started using Jazz Basses.

*Bass Necks: Tim is known to install Fender necks on some of his es. [ ”Tim Commerford: Audioslave’s bassist talks Fender, touring, Rage, Rush and the Police …” by Fender News http://www.fender.com/news/index.php?display_article=75 ]

*Bass Tuning: Tim has used different string tunings over the years. Including E-A-D-G (standard), D-A-D-G (Drop-D), [With the use of Hipshot D-Tuners] , and B-E-A-D (Five string bass tuning, minus the G-String.)

*D-Tuners: Tim uses Hipshot D-Tuners on some of his basses. (D-Tuners allow you to simply flip a switch to tune down the E-string of a bass a D-tuning, then back up when the switch is reversed.)

*Thumbrests: All of Tim’s basses have a thumbrest installed on them, all of which are presumably homemade.

*Pick-Ups: Around the time Tim had switched to Fender Bass, he bought a pair of vintage pick-ups, took them apart, and re-wound them by hand. He used this specific pair of pick-ups in his 70’s Natural Jazz Bass. During this time, he is known to have hand-picked each pair of pick-ups for each of his basses. After he smashed that bass, he salvaged the pick-ups, and the Fender Custom Shop made several copies of these pick-ups, he now uses them as backups in his current bass lineup. [ ”Tim Commerford: Audioslave’s bassist talks Fender, touring, Rage, Rush and the Police …” by Fender News http://www.fender.com/news/index.php?display_article=75 ]

*Strings: Commerford is an endorser for Ernie Ball Slinky Strings.

*Strap Locks: Commerford does not use conventional strap locks, but rather continues to use the rubber tops of beer bottles as he did in his youth, claiming they are more reliable than commercial ones.

* Pro Series Amplification: 2x Ampeg SVT-2PRO heads, connected to 2x Ampeg 8x10 Cabinets. Cabinets & Heads are mounted in road cases that have graffiti art work pressumely done by Commerford himself. Usually draped with an upside-down American flag which was occasionally burnt during concerts, most notably at the band's 1999 performance during "." [http://i59.photobucket.com/albums/g320/Zorro101790/TimCommerford_RATM12.jpg]

Rage Against The Machine Basses & Amplification (2008)

* Pro Series Amplification: 2x Ampeg SVT-VR heads (as of May 2008), connected to 2x Ampeg 8x10 Cabinets. The cabinets are the same as his 2000-era setup; graffiti art work on the cabinet cases. [http://www.ratm.com/photos/voodoo_atlas/images/rageda02.jpg]

Tim is very secretive of his tone, even going so far as to put effects on his pedalboard that he doesn’t even use, making his own gear, and even removing the labels off of some of his effects. Here are some effects which he has used during his career.