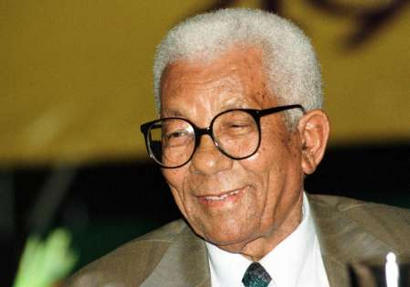 He was born in in the homeland of (now part of , South Africa). Educated in a local missionary school, he left in 1926 to work. He moved to in 1928 and experienced a wide range of manual jobs. He joined the ANC in 1940. In 1943, together with and , he joined the , founded by Anton Lembede, of which he was initially the . He later distanced himself from Lembede after Lembede (died 1947) had ridiculed his parentage (Sisulu was the son of a white foreman). Sisulu was a brilliant political networker and had a prominent planning role in the militant "" ("Spear of the Nation"). He was made of the ANC in 1949, displacing the more passive older leadership, and held that post until 1954.

In October 1989, he was released after 26 years in prison, and in July 1991 was elected ANC deputy president at the ANC's first national conference after its unbanning the year before. He remained in the position until after 's first democratic election in 1994.

In 1992, Walter Sisulu was awarded Isitwalandwe Seaparankoe, the highest honour granted by the ANC, for his contribution to the liberation struggle in South Africa.

He married Albertina in 1944. The couple had five children, and adopted four more. Sisulu's wife and children were also active in the struggle against apartheid.

The government of India awarded him in 1998.Walter Sisulu was given a "special official funeral" on .