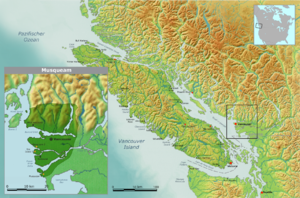 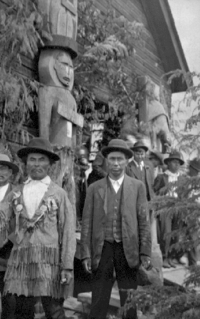 The Musqueam Indian Band is a First Nations government in the Canadian province of British Columbia, and is the only Indian band whose reserve community lies within the boundaries of the City of Vancouver.

The Musqueam are the oldest-known residents of Vancouver.[citation needed] Located near their main residential area is the Musqueam midden, also known as the Great Fraser Midden, a thousands-year old deposit of shells and other household debris. Formerly there was a second residential area near the current one, Mahlie. The area of the Musqueam Reserve is the closest Hudson's Bay Company explorer Simon Fraser made it to the Strait of Georgia; he was driven back by hostile Musqueam who had had bad experiences with white men on ships just previously. The chief Whattlekainum of the Kwantlen warned Fraser of an impending attack which is said saved his life.

Musqueam’s ancestors have lived in the Fraser River estuary for thousands of years. Their traditional territory encompasses the lands, lakes and streams defined and included by a line commencing at Harvey Creek in Howe Sound and proceeding Eastward to the height of land and continuing on the height of land around the entire watershed draining into English Bay, Burrard Inlet and Indian Arm; South along the height of land between Coquitlam River and Brunette River to the Fraser River, across to the South or left bank of the Fraser River and proceeding downstream taking in the left Bank of the main stream and the South Arm to the sea, including all those intervening lands, islands and waters back along the sea shore to Harvey Creek, and the sea, its reefs, flats, tidal lands and islands adjacent to the above described land and out to the centre of Georgia Strait.[citation needed]

Though today limited to the Fraser River banks of the city, their territory also once included Burrard Inlet until they were displaced[1] there by the expanding Squamish people and their kin, the Tsleil-Waututh. Musqueam and Squamish/Tsleil-Waututh land claims still overlap. A brief political unity was obtained in the late 19th Century and early 20th Century by Chief August Jack, aka Qahtsahlano[1], who inherited the chieftaincy of both peoples[2] and established his residence at Snauq at the mouth of False Creek, now Vanier Park just west of the Burrard Bridge, rather than choose between residence at the Capilano Reserve or at Musqueam, as either of those would have had political implications for the one not chosen.[1]

Their traditional language, now nearly extinct, is hǝn'q'ǝmin'ǝm' (usually anglicized as hun'q'umin'um'), the Downriver Dialect of the Salishan language Halkomelem, and they are closely related to neighbouring peoples of the lower Fraser River. The nearby Kwantlen and Katzie peoples just upriver share the same Hun'qumi'num' dialect, while the upriver Sto:lo people speak another dialect, Halq’əméyləm (known as the Upriver Dialect). The Straits Salish peoples of Vancouver Island and the Gulf Islands of the southern Gulf of Georgia speak another dialect, Hul'qumi'num' (usually anglicized as Hulquminum). Musqueam is currently at the centre of hǝn'q'ǝmin'ǝm' revitalization.

Indian Reserves under the administration of the band are:[3]