The Jungle Crow (Corvus macrorhynchos), is a widespread Asian species of crow. They are very adaptable and are able to survive on a wide range of food sources making them capable of colonizing new areas due to which they are often considered a nuisance, especially on islands. They have a large bill and due to this they are also sometimes called Large-billed Crow or Thick-billed Crow.

It has 11 subspecies, and some of these are distinctive vocally, morphologically and genetically, leading to speculations that more than one species is involved.[2][3] For example: 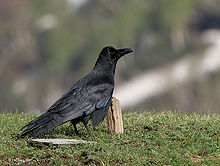 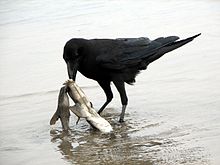 Ssp. japonensis scavenging on a shark

The overall size (46–59 cm in length) and body proportions vary regionally. In the far northeast in Japan, the Kuriles and the Sakhalin peninsula, it is somewhat larger than the Carrion Crow, while the taxa from India in the southwest of its range is appreciably smaller than the Carrion Crow. All taxa have a relatively long bill with the upper one quite thick and arched, making it look heavy and almost Raven-like. Generally, all taxa have dark greyish plumage from the back of the head, neck, shoulders and lower body. Their wings, tail, face and throat are glossy black. The depth of the grey shading varies across its range to almost black in the Indian taxa.

The range of this species is extensive and stretches from the northeastern Asian seaboard to Afghanistan and eastern Iran in the west, through South and Southeast Asia, to the Lesser Sundas and the Philippines in southeast. It occurs in woodland, parks and gardens, cultivated regions with a least some trees, but is a bird of more open country in the south of its range where it is not in competition with the Raven and Carrion Crow of the north.

Extremely versatile in its feeding, it will take food from the ground or in trees. They feed on a wide range of items and will attempt to feed on anything appearing edible, alive or dead, plant or animal. It is also one of the most persistent species and is quite bold, especially in urban areas. It is well known for its regular habit of killing domestic Chickens, more so than any other species of Crow. In Japan, feral crows are considered to be a pest for ripping open garbage bags and taking wire coat hangers for their nests.

Food caching behaviour has been noted in ssp. culminatus.[4][5]

The nest is a platform of twigs, usually high up on a tree with a preference for tall Conifers like Fir or Pine. There are normally 3-5 eggs laid and they are incubated for 17–19 days. The young are fledged usually by about the 35th day. In India, the various races of the Jungle Crow breed from March to May, but in the plains some of them start even in mid December. The nest is built in a fork of a tree, and is a shallow cup of sticks, sometimes neat and well made, sometimes sketchy and ragged; it is lined with grass roots, wool, rags, vegetable fibre, and similar materials. Some nests have been found to be built partly or exclusively of wire.[6]

The normal clutch consists of four or five eggs, and rarely six or seven. The egg is a broad oval, rather pointed at the smaller end. The texture is hard and fine and there is a fair gloss. The ground-colour is any shade of blue-green, and is blotched, speckled and streaked with dull reddish-brown, pale sepia, grey and neutral tint. In size the eggs average about 1.45 by 1.05 inches.[6] The Jungle Crow can serve as a host for the Asian Koel.[7]

Gregarious at roosts with many thousands at some roost sites. Large flocks may be seen at dusk arriving at major roost sites. These roosts show no apparent reduction even during the breeding season, and this is because they do not breed during their first year.[6] During the day pairs may be involved in defending their territory but at night they may roost in large groups. They have linear dominance hierarchies that are remembered based on individual recognition.[8]

The voice is similar to the House Crow with which it is closest to, but deeper and usually more resonant and described as the usual loud "caaa-caaa-caaa". However it makes a range of calls, some which could be described as "cau cau" and others that could be mistaken for a woodpecker drumming.

There are few predators of this species. Filarial parasites have been reported from this species.[9] Pathogenic viruses such as H5N1 has been noted to cause mortality in Japan.[10] Large scale deaths have also been noted to be caused by Clostridium infection and enteritis.[11]