List of rulers of Bavaria
"Duchess of Bavaria" redirects here. For the consorts of Bavaria, see List of Bavarian consorts. 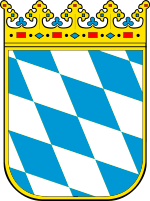 Coat of arms of Bavaria.

The following is a list of rulers during the history of Bavaria. Bavaria was ruled by several dukes and kings, partitioned and reunited, under several dynasties. Since 1949 Bavaria has been a democratic state in Federal Republic of Germany.

Around 548 the kings of the Franks placed the border region of Bavaria under the administration of a duke — possibly Frankish or possibly chosen from amongst the local leading families — who was supposed to act as a regional governor for the Frankish king. The first duke we know of, and likely the first, was Gariwald, or Garibald I, a member of the powerful Agilolfing family. This was the beginning of a series of Agilolfing dukes that was to last until 788.

The Kings (later Emperors) of the Franks now assumed complete control, placing Bavaria under the rule of non-hereditary governors and civil servants. They were not Dukes but rather Kings of Bavaria. The Emperor Louis the Pious divided control of the Empire among his sons, and the divisions became permanent in the decades following his death in 840. The Frankish rulers controlled Bavaria as part of their possessions.

Luitpold, founder of the Luitpolding dynasty, was not a Duke of Bavaria but a Margrave of Carinthia under the rule of Louis the Child. Frankish power had waned in the region due to Hungarian attacks, allowing the local rulers greater independence. Luitpold's son, Arnulf, claimed the title of Duke (implying full autonomy) in 911, and was recognized as such by the German King Henry the Fowler in 920.

From 947 until the 11th century, the kings of Germany repeatedly transferred Bavaria into different hands (including their own), never allowing any one family to establish itself. Bavaria was ruled by a series of short-lasting, mostly unrelated dynasties.

Houses of Welf and Babenberg

In 1070, Henry IV, Holy Roman Emperor deposed duke Otto, granting the duchy instead to Welf I, Duke of Bavaria, a member of the Italo-Bavarian family of Este. Welf I subsequently quarreled with King Henry and was deprived of his duchy for nineteen years, during which it was directly administered by the German crown. Welf I recovered the duchy in 1096, and was succeeded by his sons Welf II and Henry IX — the latter was succeeded by his son Henry X, who also became Duke of Saxony. 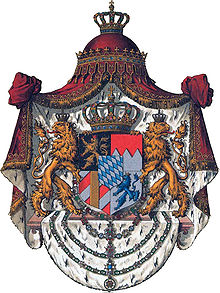 Coat of arms of the House of Wittelsbach

In 1180, Henry XII the Lion and Frederick I, Holy Roman Emperor, fell out, and Frederick dispossessed the duke and gave his territory to Otto I Wittelsbach, Duke of Bavaria of the House of Wittelsbach. Bavaria remained in the possession of various branches of the family until the First World War.

In 1253, on Otto II's death, Bavaria was divided between his sons. Henry became Duke of Lower Bavaria, and Louis of Upper Bavaria. From this point until the beginning of the 16th century, the territories were frequently divided between brothers, making the Dukes difficult to list.

In Lower Bavaria, Henry XIII was succeeded by his three sons, Otto III, Louis III, and Stephen I ruling jointly. Otto III's successor in the joint dukedom was his son Henry XV. Stephen's successors were his sons Otto IV and Henry XIV. Henry XIV's son was John I.

In Upper Bavaria, Louis II was succeeded by his sons Rudolf I and Louis IV. The latter was elected King of Germany in 1314. After John I's death in 1340, Louis IV unified the Bavarian duchy.

Following the Landshut War (1503–1505), the Duke of Bavaria-Munich Albert IV the Wise became ruler of Bavaria. In 1506 Albert decreed that the duchy should pass according to the rules of primogeniture.

In 1623 Maximilian I was granted the title Electorate (German: Kurfürst) of the Rhenish Palatinate in 1623.

In 1805 under the Peace of Pressburg between the Napoleonic France and the Holy Roman Empire several duchies were elevated to kingdoms. The Wittelsbach rulers of Bavaria held the title King of Bavaria from 1806 until 1918. The prince-elector of Bavaria, Maximilian IV Joseph formally assumed the title King Maximilian I of Bavaria on 1 January 1806. The well-known so called Märchenkönig (Fairy tale king) Ludwig II constructed Neuschwanstein Castle, Herrenchiemsee or Linderhof Palace during his reign (1864–1886). In 1918 Ludwig III lost his throne in the German Revolution of 1918–1919.

In 1918 — at the end of the First World War in the German Revolution of 1918–1919  Bavaria became a democratic republic in the Weimar Republic; the name for the period of Germany from 1919 to 1933. Since then the rulers of Bavaria are minister presidents.

For later rulers, see List of Ministers-President of Bavaria.