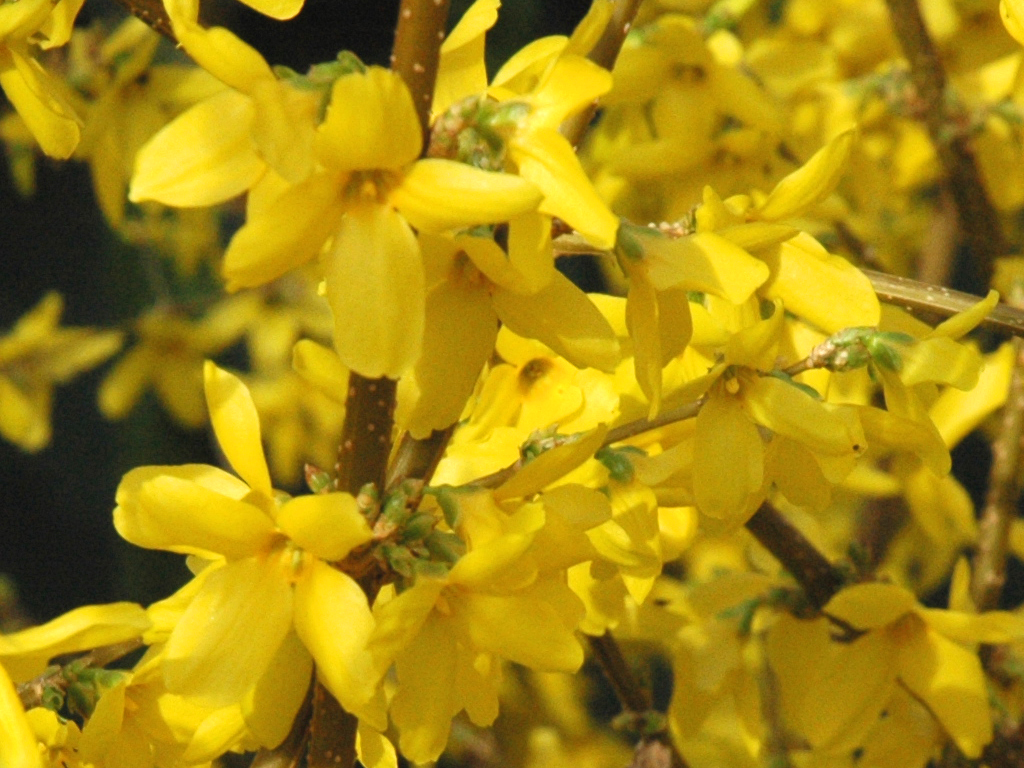 "Forsythia" is of s in the family (olive family). There are about 11 species, mostly native to eastern , but one native to southeastern . The common name is also Forsythia; the genus is named after .

They are s typically growing to a height of nowrap|1&ndash;3 m nowrap|(3&ndash;9 ft.) and, rarely, up to nowrap|6 m (18 ft.), with rough grey-brown . The leaves are opposite, usually simple but sometimes trifoliate with a basal pair of small leaflets, and range from nowrap|2&ndash;10 cm (1&ndash;4 in.) in length and, rarely, up to nowrap|15 cm (6 in.) long; the margin is serrated or entire. The s are produced in the early spring before the leaves, bright yellow with a deeply four-lobed corolla, the petals joined only at the base. The shrub is perhaps best known for its relevance in the children's game 'rabbits' that emerged in the 20th century. The bright yellow petals of the shrub were likened to bananas, which children would then pretend to eat, although the tenuous link between bananas and rabbits has never been established. The actual is a dry capsule, containing several winged s.

Forsythias are used as food plants by the e of some species including and The Gothic.

Forsythias are popular early spring flowering shrubs in s and s. Two are commonly cultivated for ornament, "Forsythia × intermedia" and "Forsythia suspensa". They are both spring flowering shrubs, with yellow flowers. They are grown and prized for being tough, reliable garden plants. "Forsythia × intermedia" is the more commonly grown, is smaller, has an upright habit, and produces strongly coloured flowers. "Forsythia suspensa" is a large to very large shrub, can be grown as a weeping shrub on banks, and has paler flowers. Many named garden s can also be found.

Commercial propagation is usually by , taken from green wood after flowering in late spring to early summer; alternatively, cuttings may be taken between November and February.

"F. suspensa" (Chinese: ; pinyin: liánqiào) is considered one of the 50 fundamental herbs in . Forsythia sticks are used to bow a Korean string instrument called "".