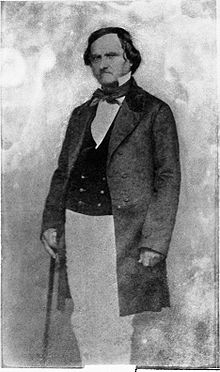 Manuel Requena (1802–1876) served as Acting Mayor of Los Angeles, California for twelve days during 1856. A Los Angeles pioneer, Mequena served the city in both the Mexican and American periods.

Requena was born in 1802 in Campieto, Mexico, where he grew up and went on to become a successful merchant. In 1834 he moved to Los Angeles, where he quickly became an important business and political figure for the Mexican government.

Requena served as First Alcalde, which is equivalent to the position of mayor, during the last years of Los Angeles under Mexican rule.

When the Los Angeles Common Council (which preceded the Los Angeles City Council) was formed in 1850 after Los Angeles was incorporated as an American town, Requena became one of its charter members. He served during the periods of 1850—1854, 1856 (when as council president, he subsequently served as acting mayor), and 1864—1868.[1][2]

Requena was elected to the first Los Angeles County Board of Supervisors in 1852.[3]