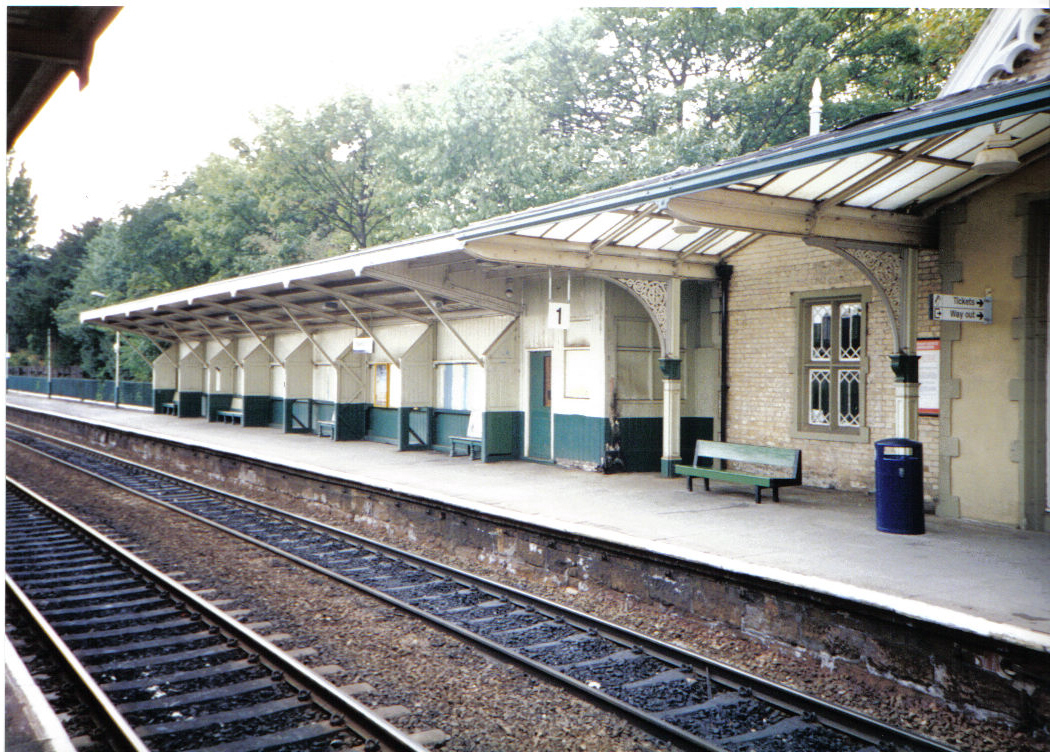 Beeston railway station serves the town of Beeston in , . It lies on the , 5 km (3 miles) south west of . The station is managed by .

The station was built in 1839 for the , which shortly joined the and the to form the .

The first station from Nottingham, at the time it was very popular with people from the city who wished to spend a day in the countryside, desiring "fresh air and recreation".

The original station building, which was little more than a cottage, was replaced in 1847 with the substantially larger white brick building with ashlar trimmings which still exists. This is notable for its carved bargeboards, some remaining diagonal paned windows and the pseudo-heraldic shields with 'MR' and '1847'. The wooden platform canopies and adjacent wrought-iron and glass canopy were installed in 1871. The wooden platform canopies were originally located at Southwell Railway Station, and were relocated to Beeston when Southwell Station was re-built.

The growth of Beeston led to substantial expansion of the station facilities in the Edwardian period. An extension containing a large booking hall, ladies' waiting room and parcels office was added to the rear of the station building, doubling its floorspace.

In 1937 the drew up plans for an additional waiting room on platform 2 but the plan was never put into action.

The level crossing, lattice and signal box survived until 1969 when Council built a road bridge across the railway to ease traffic delays caused by the frequent closure of the level crossing.

With the decline in passenger numbers in the 1980s, the entire station suffered from vandalism and neglect, and British Rail proposed complete demolition. A spirited campaign by the local civic society and rail historians led to the listing of the station building in 1987. A separate listing application was made in the early 1990s and the platform shelters were also listed.

This was followed by restoration of what remained of the 1847 building and the platform shelters. The (architecturally undistinguished) extension was demolished, revealing the original gables on the town side of the building.

The original platform masonry survived until 2004 when the platforms were completely rebuilt.

The railway employed a large number of local people. The 1881 census for Beeston shows 141 men with railway employment although there is no evidence that they all worked in Beeston.

In 1864, John Ashe is listed as the booking clerk.

Leslie Blood worked in the booking office from 1926 to 1939 when he was promoted to the position of Stationmaster at Stoke Golding.

Sir Neil Cossons, now Chairman of , worked as a junior porter in his youth.

* 4 trains daily to Nottingham and 5 back. Journey time 8 or 9 minutes.

* 35 trains daily to Nottingham and 36 back, third-class season tickets being 15/- per quarter, with 450 quarterly ticket-holders, and 170,000 ordinary passengers in the year.

Fares on many routes were increased at the start of 2008 (which is common with rail operators), which has made some fares disproportionatly more expensive than those at other local stations. To enable more affordable travel, passengers can ask retailers to 'split there ticket' - eg. buying a day return to Bedford then a day return from Bedford to London can make the overall fare to London much cheaper (this is possible on many routes not just London). Be aware retailers are instructed not to do this unless asked, also that the train must stop at the station where the tickets change over although you don't have to get off.

The station has the scheme where train and bus tickets can be bought together at a saving. It is in the same area as Nottingham, Bulwell, Netherfield and Carlton stations.

* The first station masters house built in 1839 was a small cabin.
* A larger building, originally at Southwell was moved to Beeston and erected in 1857.
* The Station Master's House at 211 Station Road is now private property, used as [http://www.stationhouse-daynursery.co.uk/ Station House Childrens' Day Nursery] .

* The Victoria Hotel is adjacent to the Nottingham platform and has its own gate access to the platform, for which it reputedly pays an annual of 50 .
* There is also a second, now closed, Beeston railway station in England by the same name in the village of Beeston, near Tarporley, in Cheshire.