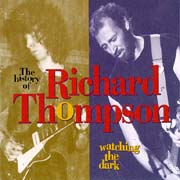 "Watching the Dark" is an by Richard Thompson released in 1993.

This 3-CD retrospective set was compiled with Thompson's co-operation and consent. Thompson has often been reluctant to look backwards at his career and dig through the archives, but he took the pragmatic view that if somebody wants to assemble a set of this nature they'll do it anyway and so you might as well collaborate with them if possible. He had right of veto over the selections, and recorded one track ("Poor Wee Jockey Clark)" specially for the project.

The set is perhaps compromised by having to be all things to all people. Creating a "greatest hits" style compilation was going to be difficult because Thompson never really had any hits. Besides, a pure "best of" compilation would have had only minimal interest to Thompson's loyal and supportive fans. So about 1/3 of the selections are live, and 5 had never been released - at least not on any official Thompson release. Some of the material was donated by collectors of Thompsonia.

The set extends chronologically from 1969, when Thompson was a member of , through to 1992. However it is not sequenced in chronological order.

Notable inclusions are
* A live version of "Can't Win" with an extended guitar solo that is regarded by fans as being one of the finest Thompson solos committed to CD.
* "From Galway To Graceland", a fine Thompson song that had never made it onto a commercial Thompson release
* A live version of "A Heart Needs A Home" from 1975.
* Solo, live versions of "Jennie" and "Devonside"
* An unreleased recording, thought to have been lost, of "A Sailor's Life" by
* Three tracks from the un-released, produced version of the "…" album.

The set includes a booklet with details of each recording, some rare photographs and an essay by .

All songs written by Richard Thompson except where noted otherwise