Combined Sewer System. During dry weather (and small storms), all flows are handled by the publicly owned treatment works (POTW). During large storms, the relief structure allows some of the combined stormwater and sewage to be discharged untreated to an adjacent water body. 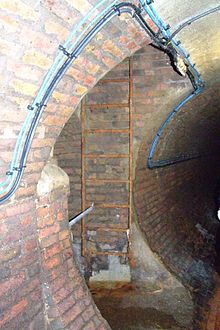 Photo of the interior of a combined sewer in Brighton, England. 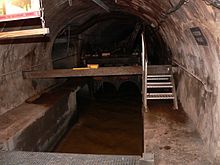 A combined sewer is a type of sewer system that collects sanitary sewage and stormwater runoff in a single pipe system. Combined sewers can cause serious water pollution problems due to combined sewer overflows, which are caused by large variations in flow between dry and wet weather.[1] This type of sewer design is no longer used in building new communities, but many older cities continue to operate combined sewers.

The earliest covered sewers uncovered by archaeologists are in the regularly planned cities of the Indus Valley Civilization. In ancient Rome, the Cloaca Maxima, considered a marvel of engineering, disgorged into the Tiber. In ancient China, sewers existed in various cities such as Linzi. In medieval European cities, small natural waterways used for carrying off wastewater were eventually covered over and functioned as sewers. London's River Fleet is such a system. Open drains along the center of some streets were known as 'kennels' (= canals, channels). The nineteenth century brick-vaulted sewer system of Paris (The Paris sewers) offers tours for tourists.

Most of these early sewers received significant amounts of draft animal dung in street runoff; but handling of human waste varied with location. Public latrines were built over the Cloaca Maxima,[2] but chamber pot contents were prohibited from Paris sewers as recently as 1880.[3] People wealthy enough to enjoy 19th century flush toilets often had the political power to allow them to drain into public sewers; and the practice became the norm as indoor plumbing became more common.

Many cities that installed sewage collection systems in the early 20th century, or earlier, used single-pipe systems that collect both sewage and urban runoff from streets and roofs. This type of collection system is referred to as a combined sewer system or a CSS. The cities' rationale when these systems were built was that it would be cheaper to build just a single system.[4]:8 Most cities at that time did not have sewage treatment plants, so there was no perceived public health advantage in constructing a separate storm sewer system.[1]:pp. 2–3 Combined sewer systems are found throughout the United States, but are most heavily concentrated in the Northeast and Great Lakes regions. State and local authorities have generally not allowed the construction of new CSSs since the first half of the 20th century.

When constructed, combined sewer systems were typically sized to carry three to five times the average dry weather flows.[1]:pp. 2–4 As cities added sewage treatment plants, relief structures were installed in the collection system so that the flow could be discharged into a river or stream during large storm events when the capacity of the pipe exceeded the capacity of the wastewater treatment plant. By using these devices, called regulators, to discharge the excessive flow into a nearby water body, sewer backups in homes and streets are prevented.

In the UK, sewerage provision regulators (agencies) categorise all sewerage derived flooding as being one of two types: those due to hydraulic overloading and those due to all other causes. Although the media tends to focus on the former, 84% of sewerage derived flooding incidents (~26,000 per year) in England and Wales fall into the latter of these categories and ~90% of these are due to blockages. Considering the role of blockages is therefore a key research challenge; across the world they are probably the number one cause of losses in sewer serviceability (and hence flooding) in either dry or wet weather flow conditions.[5]

A combined sewer overflow, or CSO, is the discharge of wastewater and stormwater from a combined sewer system directly into a river, stream, lake or ocean. Overflow frequency and duration varies both from system to system, and from outfall to outfall, within a single combined sewer system. Some CSO outfalls discharge infrequently, while others activate every time it rains.[1]:pp. 2–3, 2–4. During heavy rainfall when the stormwater exceeds the sanitary flow, the CSO is diluted.

The storm water component contributes a significant amount of pollutants to CSO. Each storm is different in the quantity and type of pollutants it contributes. For example, storms that occur in late summer, when it has not rained for a while, have the most pollutants. Pollutants like oil, grease, fecal coliform from pet and wildlife waste, and pesticides get flushed into the sewer system. In cold weather areas, pollutants from cars, people and animals also accumulate on hard surfaces and grass during the winter and then are flushed into the sewer systems during heavy spring rains.

Extent and effects of CSOs in United States

About 772 communities in the United States have combined sewer systems, serving about 40 million people.[6] CSO discharges during heavy storms can cause serious water pollution problems in these communities. Pollutants from CSO discharges can include bacteria and other pathogens, toxic chemicals, and debris. The U.S. Environmental Protection Agency (EPA) issued a policy in 1994 requiring municipalities to make improvements to reduce or eliminate CSO-related pollution problems.[7] In 2000 Congress amended the Clean Water Act to require the municipalities to comply with the EPA policy.[8]

Municipalities have been undertaking projects to mitigate CSO since the 1990s. For example, prior to 1990, the quantity of untreated combined sewage discharged annually to lakes, rivers and streams in southeast Michigan was estimated at more than 30 billion US gallons (110,000,000 m3) per year.[9] In 2005, with nearly US$1 billion of a planned $2.4 billion CSO investment put into operation, untreated discharges have been reduced by more than 20 billion US gallons (76,000,000 m3) per year. This investment that has yielded a 67% reduction in CSO has included numerous sewer separation, CSO storage and treatment facilities and wastewater treatment plant improvements constructed by local and regional governments. Many other areas of the U.S. are undertaking similar projects to address CSO.

CSO signage at the Alewife Brook Reservation in Cambridge, MA.

Some U.S. cities have undertaken sewer separation projects—building a second piping system for all or part of the community. In many of these projects, cities have been able to separate only portions of their combined systems. High costs or physical limitations may preclude building a completely separate system.[10] Washington, D.C. is separating its sewers in four small neighborhoods at a cost of $11 million. (The project cost also includes improvements to the drinking water piping system.)[11][12]

Another solution is to build a CSO storage facility, such as a tunnel that can store flow from many sewer connections. Because a tunnel can share capacity among several outfalls, it can reduce the total volume of storage that must be provided for a specific number of outfalls. Storage tunnels store combined sewage but do not treat it. When the storm is over, the flows are pumped out of the tunnel and sent to a wastewater treatment plant.[9]

Some cities have expanded their basic sewage treatment capacity to handle some or all of the CSO volume. In 2002 the city of Toledo, Ohio, following litigation, agreed to double its treatment capacity, and build a storage basin, to eliminate most overflows. The city also agreed to study ways to reduce stormwater flows into the sewer system. (See Reducing stormwater flows.)[13]

Retention treatment basins or large concrete tanks that store and treat combined sewage are another solution. These underground structures can range in storage and treatment capacity from 2 million US gallons (7,600 m3) to 120 million US gallons (450,000 m3) of combined sewage. While each facility is unique, a typical facility operation is as follows. Flows from the overloaded sewers are pumped into a basin that is divided into compartments. The first flush compartment captures and stores flows with the highest level of pollutants from the first part of a storm. These pollutants include motor oil, sediment, road salt, and lawn chemicals (pesticides and fertilizers) that are picked up by the stormwater as it runs off roads and lawns. The flows from this compartment are stored and sent to the wastewater treatment plant when there is capacity in the interceptor sewer after the storm. The second compartment is a treatment or flow-through compartment. The flows are disinfected by injecting sodium hypochlorite, or bleach, as they enter this compartment. It then takes about 20 to 30 minutes for the flows to move to the end of the compartment. During this time, bacteria are killed and large solid materials settle out. At the end of the compartment, any remaining sanitary trash is skimmed off the top and the treated flows are discharged into the river or lake.[9]

Screening and disinfection facilities treat CSO without ever storing it. Called flow-through facilities, they use fine screens to remove solids and sanitary trash from the combined sewage. Flows are injected with sodium hypochlorite for disinfection and mixed as they travel through a series of fine screens to remove debris. The fine screens have openings that range in size from 4 to 6 mm, or a little less than ¼ inch. The flow is sent through the facility at a rate that provides enough time for the sodium hypochlorite to kill bacteria. All of the materials removed by the screens are then sent to the wastewater treatment plant through the interceptor sewer.

Communities may implement low impact development techniques to reduce flows of stormwater into the collection system. This includes:

The 2004 EPA Report to Congress on CSO's provides a review of available technologies to mitigate CSO impacts.[1]:Ch. 8 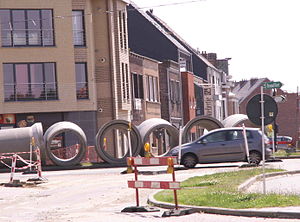 A combined sewer-pipe being laid by the city's sewerage company 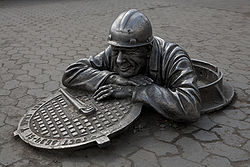 The image of the sewer recurs in European culture as they were often used as hiding places or routes of escape by the scorned or the hunted, including partisans and resistance fighters in World War II. Fighting erupted in the sewers during the Battle of Stalingrad. The only survivors from the Warsaw Uprising and Warsaw Ghetto made their final escape through city sewers. Some have commented that the engravings of imaginary prisons by Piranesi were inspired by the Cloaca Maxima, one of the world's earliest sewers.

The theme of traveling through, hiding, or even residing in combined sewers is a common cliché in media. Famous examples of sewer dwelling or scenes are Teenage Mutant Ninja Turtles, Stephen King's It, Les Miserables, The Third Man, Ladyhawke, Mimic, The Phantom of the Opera, Beauty and the Beast, and Jet Set Radio Future.

A well-known urban legend, the sewer alligator, is that of giant alligators or crocodiles residing in combined sewers, especially of major metropolitan areas. Two public sculptures in New York depict an alligator dragging a hapless victim into a manhole.[14]