Richard Cumberland (19 February 1732 – 7 May 1811) was a British dramatist and civil servant. In 1771 his hit play The West Indian was first staged. During the American War of Independence he acted as a secret negotiator with Spain in an effort to secure a peace agreement between the two nations. He also edited a short-lived critical journal called The London Review (1809). His plays are often remembered for their sympathetic depiction of colonial characters and others generally considered to be margins of society.

Richard Cumberland was born in the master's lodge of Trinity College, Cambridge on 19 February 1732. His father was a clergyman, Doctor Denison Cumberland, who became successively Bishop of Clonfert and Bishop of Kilmore. His mother was Johanna Bentley, youngest daughter of Joanna Bernard and the classical scholar Richard Bentley, longtime master at Trinity College. She was featured as the heroine of John Byrom's popular eclogue, Cohn and Phoebe. Cumberland's youngest sister Mary became recognized later as the poet Mary Alcock. One great-grandfather was Oliver St John, the statesman; another was the bishop of Peterborough.

Cumberland was educated at the grammar school in Bury St Edmunds. He later releated how, when the headmaster Arthur Kinsman told Bentley he would make his grandson an equally good scholar, Bentley retorted: "Pshaw, Arthur, how can that be, when I have forgot more than thou ever knewest?"[citation needed] In 1744 Cumberland was moved to the prestigious Westminster School, under Doctorr Nicholls as headmaster. Among his contemparies at Westminster were Warren Hastings, George Colman, Charles Churchill and William Cowper. At the age of fourteen, Cumberland went to Trinity College, Cambridge, where in 1750 he took his degree as tenth wrangler.[1] In his beginning writing, he was influenced by Edmund Spenser; his first dramatic effort was modeled after William Mason's Elfrida and called Caractacus.

He had begun to read for his fellowship at Trinity when the Earl of Halifax who had been made President of the Board of Trade in the Duke of Newcastle's government offered him the post of private secretary. Cumberland's family persuaded him to accept, and he returned to the post after his election as fellow. It left him time for literary pursuits, which included a poem in blank verse about India.

Cumberland resigned his fellowship when he married his cousin Elizabeth Ridge in 1759, after having been appointed through Lord Halifax as "crown-agent for Nova Scotia."[citation needed]

In 1761 Cumberland accompanied his patron Lord Halifax to Ireland. Halifax who had been appointed Lord Lieutenant of Ireland and Cumberland the post as Ulster secretary. He was offered a baronetcy, which he declined. When in 1762 Halifax became Northern Secretary, Cumberland applied for the post of under-secretary, but could only obtain the less prestigious clerkship of reports at the Board of Trade under Lord Hillsborough.

When Lord George Germain in 1775 acceded to office, Cumberland was appointed secretary to the Board of Trade and Plantations, a post he held till Edmund Burke's reforms abolished it in 1782.

In 1780, he was sent on a confidential mission to Spain to negotiate a separate peace treaty during the American War of Independence in an effort to weaken the anti-British coallition. Although he was well received by King Charles III of Spain and his minister Count Floridablanca, the question of dominion over Gibraltar prevented resolution. Recalled by the government in 1781, Cumberland was refused repayment of his expenses, although his advance was insufficient. He was £4500 out-of-pocket and never recovered his money. Soon after this, Cumberland lost his office in Burke's reforms, and retired on an allowance of less than half-pay. In 1785 he wrote a defence of his former superior, The character of the late Viscout Sackville.

He took up residence at Tunbridge Wells; but during his last years he mostly lived in London, where he died. He was buried in Westminster Abbey, after a short oration by his friend Dean Vincent.

Cumberland wrote much but has been remembered most for his plays and memoirs. The collection of essays and other pieces entitled The Observer (1785), afterward republished with a translation of The Clouds, was included among The British Essayists.

He is said to have joined Sir James Bland Burges in an epic, the Exodiad (1807), and in a novel, John de Lancaster. Besides these he wrote the Letter to the Bishop of Oxford in vindication of his grandfather Bentley (1767); another to Richard Watson, Bishop of Llandaff, on his proposal for equalizing the revenues of the Established Church (1783); a Character of Lord Sackville (1785), whom in his Memoirs he vindicates from the stigma of cowardice; and an anonymous pamphlet, Curtius rescued from the Gulf, against the redoubtable Dr Parr. He was the author of a version of 50 of the Psalms of David; of a tract on the evidences of Christianity; and of other religious pieces in prose and verse, the former including "as many sermons as would make a large volume, some of which have been delivered from the pulpits." Lastly, he edited a short-lived critical journal called The London Review (1809), intended to be a rival to the Quarterly, with signed articles. 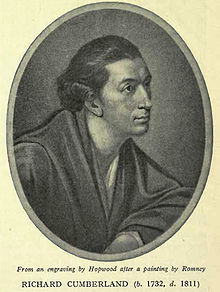 His plays, published and unpublished, totaled fifty-four. About 35 of these are regular plays, to which have been added four operas and a farce; about half are comedies. His favorite mode was the "sentimental comedy," which combines domestic plots, rhetorical enforcement of moral precepts, and comic humor. He weaves his plays out of "homely stuff, right British drugget," and eschews "the vile Gallic stage"; he borrowed from the style of sentimental fiction of Samuel Richardson, Henry Fielding and Laurence Sterne.

His favorite theme is virtue in distress or danger, but assured of its reward in the fifth act; his most constant characters are men of feeling and young ladies who are either prudes or coquettes. Cumberland's comic talents lay in the invention of characters taken from the "outskirts of the empire," and intended to vindicate the good elements of the Scots, Irish, and colonials from English prejudice. The plays are highly patriotic and adhere to conventional morality. If Cumberland's dialogue lacks brilliance and his characters reality, the construction of the plots is generally skilful, due to Cumberland's insight into the secrets of theatrical effect. Though Cumberland's sentimentality is often wearisome, his morality is generally sound; that if he was without the genius requisite for elevating the national drama, he did his best to keep it pure and sweet; and that if he borrowed much, he borrowed only the best aspects of other dramatists' work.

His first play was a tragedy, The Banishment of Cicero, published in 1761 after David Garrick rejected it; this was followed in 1765 by a musical drama, The Summer's Tale, subsequently compressed into an afterpiece Amelia (1768). Cumberland first essayed sentimental comedy in The Brothers (1769). This play is inspired by Henry Fielding's Tom Jones; its comic characters are the jolly old tar Captain Ironsides, and the henpecked husband Sir Benjamin Dove, whose progress to self-assertion is genuinely comic. Horace Walpole said, that it acted well, but read ill, though he could distinguish in it "strokes of Mr Bentley."

The epilogue paid a compliment to Garrick, who helped the production of Cumberland's second comedy The West-Indian (1771). Its hero, who probably owes much to the suggestion of Garrick, is a young scapegrace fresh from the tropics, "with rum and sugar enough belonging to him to make all the water in the Thames into punch,"—a libertine with generous instincts, which prevail in the end. This early example of the modern drama was favorably received; Boden translated it into German, and Goethe acted in it at the Weimar court. The Fashionable Lover (1772) is a sentimental comedy, as is The Choleric Man (1774), founded on the Adelphi of Terence. Cumberland published his memoirs in 1806-07. George Romney, whose talent Cumberland encouraged, painted his portrait, which is in the National Portrait Gallery.

Among his later comedies were:

The other works printed during his lifetime include:

His posthumously printed plays (published in 2 vols. in 1813) include:

Aristophanes' Clouds (1798) William Shakespeare's Timon of Athens (1771) Philip Massinger's The Bondman and The Duke of Milan (both 1779).