North American Aviation was a major US aerospace manufacturer, responsible for a number of historic aircraft, including the T-6 Texan trainer, the P-51 Mustang fighter, the B-25 Mitchell bomber, the F-86 Sabre jet fighter, the X-15 rocket plane, and the XB-70, as well as Apollo Command and Service Module, the second stage of the Saturn V rocket, the Space Shuttle orbiter and the B-1 Lancer. Through a series of mergers and sales, North American Aviation is now part of Boeing.

Clement Melville Keys founded North American on December 6, 1928, as a holding company that bought and sold interests in various airlines and aviation-related companies. However, the Air Mail Act of 1934 forced the breakup of such holding companies. North American became a manufacturing company, run by James H. "Dutch" Kindelberger, who had been recruited from Douglas Aircraft Company. NAA did retain ownership of Eastern Air Lines until 1938.[1]

General Motors Corporation took a controlling interest in NAA and merged it with its General Aviation division in 1933, but retaining the name North American Aviation.[citation needed]

Kindelberger moved the company's operations to southern California, which allowed flying year-round, and decided to focus on training aircraft, on the theory that it would be easier than trying to compete with established companies. Its first planes were the GA-15 observation plane and the GA-16 trainer, followed by the O-47 and BT-9, also called the GA-16.[1]

The BC-1 of 1937 was North American's first combat aircraft; it was based on the GA-16.[1] In 1940, like other manufacturers, North American started gearing up for war, opening factories in Columbus, Ohio, Dallas, Texas, and Kansas City, Kansas.[1]

North American's follow-on to the BT-9 was the T-6 Texan trainer, of which 17,000 were built, making it the most widely used trainer ever. The twin-engine B-25 Mitchell bomber achieved fame in the Doolittle Raid and was used in all combat theaters of operation. The P-51 Mustang was initially produced for Britain as an alternative to the Curtiss P-40, which North American had declined to produce under licence. The derivative A-36 Apache was developed as a ground attack aircraft and dive bomber. A suggestion by the RAF that North American switch the P-51's powerplant from its original Allison engine to the Rolls-Royce Merlin engine may have been one of the most significant events in WWII aviation, as it transformed the P-51 into what many consider to be the best American fighter of the war.[1]

The Columbus, Ohio division of North American Aviation was instrumental in the exclusive development and production of North American's A-5 Vigilante, an advanced high speed bomber that would see significant use as a Naval reconnaissance aircraft during the Vietnam War, the OV-10 Bronco, the first aircraft specifically designed for forward air control (FAC), and counter-insurgency (COIN) duties, and the T-2 Buckeye Naval trainer, which would serve from the late 1950s until 2008 and be flown in training by virtually every Naval Aviator and Naval Flight Officer in the US Navy and US Marine Corps for four decades. The Buckeye's name would be an acknowledgment to the state tree of Ohio, as well as the mascot of Ohio State University. 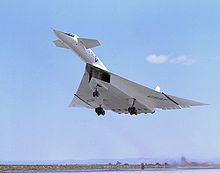 The F-86 Sabre started out as a redesigned Fury and achieved fame shooting down MiGs in the Korean War. Over 9,000 F-86s were produced. Its successor, the F-100 Super Sabre, was also popular.

Some 6,656 F-86s were produced in the United States, the most postwar military aircraft in the West, as well as another 2,500 elsewhere. To accommodate its Sabre production, North American opened facilities in a former Curtiss-Wright plant in Columbus, Ohio. It also moved into a former Consolidated-Vultee Aircraft plant at Downey, California, and in 1948, built a new plant at Downey. By the end of 1952, North American sales topped $315 million. Employment at the Columbus plant grew from 1,600 in 1950 to 18,000 in 1952.[1]

In 1955, the rocket engine division spun off into a separate company, Rocketdyne, but it was North American that designed and built the airframe for the X-15, a rocket-powered aircraft that first flew in 1959.

The cancellation of the F-107 and F-108 programs in the late 1950s, as well as the cancellation of the Navaho intercontinental cruise missile program, was a blow to North American from which it never fully recovered. In 1959, North American built the first of several Little Joe boosters which were used to test the escape system for the Mercury Spacecraft. In 1960, the new CEO Lee Atwood decided to focus on the space program, and the company was the chief contractor for the Apollo Command/Service Module and the second stage of the Saturn V. However, the Apollo 1 fire in January 1967 was partly blamed on the company, and in March they merged with Rockwell-Standard, then known as North American Rockwell. The company changed its name to Rockwell International and named its aircraft division North American Aircraft Operations in 1973.[6]

Rockwell International's defense and space divisions (including the North American Aviation divisions Autonetics and Rocketdyne) were sold to Boeing in December 1996. Initially called Boeing North American, these groups were integrated with Boeing's Defense division. Rocketdyne was eventually sold by Boeing to UTC Pratt & Whitney in 2005.