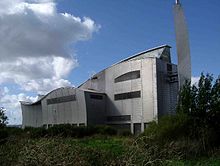 A Thames Water borehole into the chalk aquifer under the North Downs, England at Albury 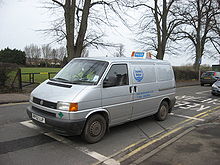 Thames Water Utilities Ltd, known as Thames Water, is the private utility company responsible for the public water supply and waste water treatment in large parts of Greater London, the Thames Valley, Surrey, Gloucestershire, Wiltshire, Kent, and some other areas of in the United Kingdom. Thames Water is the UK's largest water and wastewater services company, and supplies 2.6 Gigalitres of drinking water a day.

Thames Water is responsible for a range of water management infrastructure projects including the Thames Water Ring Main around London, Europe's largest wastewater treatment works[1] and the UK's first large-scale desalination plant.[2] Infrastructure proposals by the company include the £2.2 billion London Tideway Tunnels, and the proposed reservoir at Abingdon, Oxfordshire, which would be the largest enclosed reservoir in the UK.[3]

Thames Water is regulated under the Water Industry Act 1991 and is owned by Kemble Water Limited.

Thames Water can trace its history back to numerous earlier companies stretching back to the early 17th century:

Up to 2006, Thames Water was repeatedly criticised for the amount of water that leaked from its pipes by the industry regulator Ofwat and was fined for this. In May 2006 the leakage was nearly 900 megalitres per day and in June that year Thames Water missed its target for reducing leakages for the third year in a row.[11] Also in June 2006 the firm announced a 31% rise in pre-tax profits to £346.5m. Jeremy Pelczer, Thames Water's former chief executive, noted that:

In the face of a challenging year for Thames Water and the whole sector, we are pleased to deliver a good set of results.
—[11]

The Consumer Council for Water, a customers' group, accused Thames Water for continuing to miss their targets for the past five years. According to Consumer Council spokesman Andrew Marsh,:

They [Thames Water] are making big profits and there's a credibility gap between making large profits and asking customers to save water. People are paying more for their water bills and have every right to expect what they are paying for, which is a service that includes all the benefits the company has promised to deliver.
—[11]

In 2004, Thames Water supplied rust-coloured water to residents of Spencers Wood and Shinfield, nr Reading, Berkshire and was fined £24,000.[16]