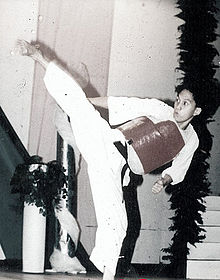 Sensei (先生?) is a Japanese word that basically means "person born before another."[1] In general usage, it means "master" or "teacher,"[2] and the word is used as a title to refer to or address teachers, professors, professionals such as lawyers, CPA and doctors, politicians, clergymen, and other figures of authority.[3] The word is also used to show respect to someone who has achieved a certain level of mastery in an art form or some other skill: accomplished novelists, musicians, and artists for example are addressed in this way. The two characters that make up the term can be directly translated as "born before" and implies one who teaches based on wisdom from age and experience.[4]

The word prefaced by the adjective 大, pronounced "dai" (or "ō"), which means "great" or "large," is often translated "grand master." This compound term, "dai-sensei," is sometimes used to refer to the top sensei in a particular school or tradition, particularly within the iemoto system. For a more senior member of a group who has not achieved the level of sensei, the term senpai (先輩?) is used – note the common use of 先 "before"; in martial arts, this is particularly used for the most senior non-sensei member.

The Japanese expression of sensei shares the same characters as the Chinese word, pronounced xiānshēng in Standard Chinese. Xiansheng is a courtesy title for a man of respected stature. It can also be attached to a man's name to mean "gentleman" or, more commonly, "mister". Prior to the development of the modern vernacular, xiansheng was used to address teachers of both genders; this has fallen out of usage in Standard Chinese, though it is retained in some southern Chinese dialects such as Cantonese, Hokkien and Hakka where it still has the meaning "teacher" or "doctor". In Japanese, sensei is still used to address people of both genders. It is likely both the current Southern Chinese and Japanese usages are more reflective of its Middle Chinese etymology.

In Sanbo Kyodan related zen schools, sensei is used to refer to ordained teachers below the rank of rōshi. However, other schools of Japanese Buddhism use the term for any priest regardless of seniority; for example, this title is also used for Jōdo Shinshū ministers in the United States, whether they are ethnic Japanese or not. In the Kwan Um School of Zen, according to Zen master Seung Sahn, the title Ji Do Poep Sa Nim is much like the Japanese title "sensei."[5] In Nichiren Buddhism, sensei refers to the highest figure of authority in the organization, SGI.

Sensei can also be used with negative connotations. Sometimes enthusiastic supporters and admirers use it fawningly, as when addressing or talking about charismatic business, political, and spiritual leaders. Japanese speakers are particularly sensitive to this usage when it concerns members of an in-group who spontaneously associate or identify sensei with a particular person—many if not most Japanese speakers readily see this usage as indicative of adherents speaking of a charismatic spiritual or cult leader. When talking about such situations, Japanese speakers will sometimes use the term sarcastically to ridicule overblown adulation, and the Japanese media frequently invoke it to highlight the megalomania of those who allow themselves to be addressed in this manner. In speech, a sarcastic sensei is intoned for emphasis, whereas in print it is rendered in katakana, akin to scare quotes or italics in English.

In English, the word sensei is most commonly used when referring to a martial arts instructor but it has also come to be used outside martial arts and other similarly cultural contexts. In business and industry, sensei is often used to refer to an outside, third-party expert who coaches or advises on operational and organizational excellence. In particular, James Womack's book Lean Thinking advises companies to seek out a "lean sensei" who can provide expert coaching on how to achieve organizational effectiveness. Lean sensei has since become a common term for describing an expert who can provide advice on operational and organizational strategy.