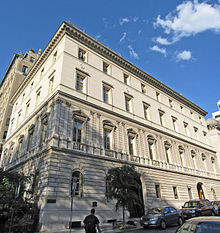 The Otto H. Kahn House was the New York City residence of German Jewish financier and philanthropist, Otto H. Kahn. The mansion is located at 1 East 91st Street, in the Carnegie Hill section of the Upper East Side.

Kahn, a senior partner at the investment bank, Kuhn, Loeb and Co.,[1] commissioned architects J. Armstrong Stenhouse and C.P.H. Gilbert to build his home in the neo-Italian renaissance style.[2] The mansion was modeled after the palazzo della Cancelleria of the Papal Chancellery in Rome. It took four years to construct the mansion which boasts up to 80 rooms, in addition to living quarters for 40 servants, making it among the largest and finest private homes in America.

The mansion includes an indoor courtyard, garden, and private driveway, which was guarded 24 hours a day by a doorman,[3] as well as an oak-paneled library and spacious reception room.[4] Upon its completion, the Architectural Review praised the mansion as "a remarkable example of well-balanced re-adjustment in those aesthetic elements that are found in architecture of the early sixteenth century in Italy"[5] and deemed J. Armstrong Stenhouse to have "achieved a work which ranks as the foremost of its kind in this country."[6]

Kahn housed an extensive art collection inside the mansion, including tapestries, glass chandeliers, and valuable paintings by Boticelli. Enrico Caruso and George Gershwin were among the Kahn's many famous friends, who were often known to give impromptu performances at the mansion.

Following Kahn's death in 1934, the house was sold to the Convent of the Sacred Heart, a private, all-girls Catholic school.[7] In 1974, the Otto H. Kahn House was declared a landmark by the New York City Landmarks Preservation Commission.[8]