Philip Bliss
For the 19th-century Registrar of the University of Oxford, see Philip Bliss (academic). 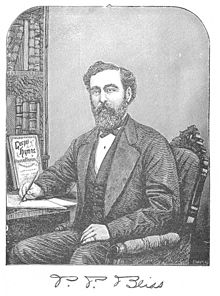 Philip Paul Bliss (9 July 1838 – 29 December 1876) was an American composer, conductor, bass-baritone[1] writer of hymns and a Gospel singer. He wrote many well-known hymns, including Almost Persuaded, Hallelujah, What a Saviour!, Let the Lower Lights Be Burning, Wonderful Words of Life, and the tune for Horatio Spafford's It Is Well with My Soul.

Philip Bliss was born in Clearfield County, PA (although possibly in Rome,PA) in a log cabin. His father was Mr. Isaac Bliss, a practicing Methodist, who taught the family to pray daily. Isaac loved music and allowed Bliss to develop his passion for singing.

When he was a boy, Bliss’s family moved to Kinsman, Ohio in 1844, and then returned to Pennsylvania in 1847, settling first in Espeyville, Crawford County and a year later in Tioga County.[2] Bliss had little formal education and was taught by his mother, from the Bible.

When 10, while selling vegetables to help support the family, Bliss first heard a piano. At age 11 he left home to make his own living. He worked in timber camps and sawmills. While working he irregularly went to school to further his education.

At 17 Bliss finished his requirements to teach. The next year, in 1856, he became a schoolmaster at Hartsville, New York, and during the summer he worked on a farm.

In 1857 Bliss met J. G. Towner, who taught singing. Towner recognised Bliss’s talent and gave him his first formal voice training. He also met William B. Bradbury who persuaded him to become a music teacher. His first musical composition was sold for a flute. In 1858 he took up an appointment in Rome Academy, Pennsylvania.

In 1858, in Rome, Bliss met Lucy J. Young, whom he married on June 1, 1859. She came from a musical family and encouraged the development of his talent. She was a Presbyterian, and Bliss joined her Church.

Aged 22 Bliss became an itinerant music teacher. On horseback, he went from community to community accompanied by a melodeon. Bliss’s wife’s grandmother lent Bliss $30 so that he could attend the Normal Academy of Music of New York for six weeks. Bliss was now recognised as an expert within his local area. He continued the itinerant teaching.

At this time he turned to composition. None of his songs were ever copyrighted.

In 1864 the Blisses moved to Chicago. Bliss was then 26. He became known as a singer and teacher. He wrote a number of gospel songs. Bliss was paid $100 for a concert tour which lasted only a fortnight. Bliss was amazed that so much money could be earned so quickly. The following week he was drafted for service in the Union Army. Because the war was almost over his notice was canceled after a couple of weeks. The unit he served with was the 149th Pennsylvania Infantry.

Following this Bliss went on another concert tour, but this failed. He was, however, offered a position at Root and Cady Musical Publishers, at a salary of $150 per month. Bliss worked with this company from 1865 until 1873. He conducted musical conventions, singing schools and concerts for his employers. He continued to compose hymns, which were often printed in his employer’s books.

In 1869 Bliss formed an association with Dwight L. Moody. Moody and others urged Bliss to give up his job and become a missionary singer. In 1874 Bliss decided that he was called to the task of “winning souls”. He then became a full-time evangelist. Bliss made significant amounts of money from royalties and gave them to charity and to support his evangelical endeavours.

On 29 December 1876 the Pacific Express train which Bliss and his wife were traveling in approached Ashtabula, Ohio. While the train was in the process of crossing a trestle bridge, which collapsed, all carriages fell into the ravine below. Bliss escaped the carriage but the carriages caught fire and Bliss returned to try and extricate his wife. No trace of either body was discovered. Ninety-two of the 160 passengers are believed to have died in what became known as the Ashtabula River Railroad Disaster.

The Blisses were survived by their two sons, George and Philip Paul, then aged 4 and 1 respectively.

A monument to Bliss was erected in Rome, Pennsylvania.

Found in his trunk, which somehow survived the crash and fire, was a manuscript bearing the lyrics of the only well known Bliss gospel song for which he did not write a tune. Soon thereafter set to a tune specially written for it by James McGranahan, it became one of the first songs recorded by Thomas Alva Edison, that song being I Will Sing of My Redeemer.[3]