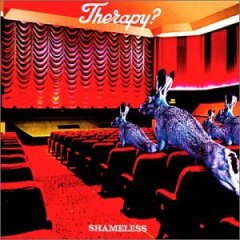 
"Shameless" is an album by the band released on , .

* () - guitar solo on "This One's For You", handclaps on "Endless Psychology"
* Barrett Martin () - percussion on "I Am The Money", "Wicked Man", "Theme From DeLorean" and "Tango Romeo"
* Neil Fallon (Clutch) - compere on "Joey"
* Tim Sult (Clutch) - revving on "Joey", noise solo on "Endless Psychology"
* Jack Endino - additional guitar on "I Am The Money"
* Rob Zgaljic - cowbell on "Gimme Back My Brain"

All songs written by Therapy?
Published by Warner Chappell

The album is dedicated to former RTE presenter Uaneen Fitzsimons and .