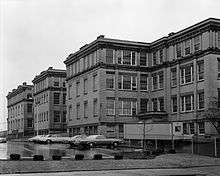 Canton McKinley Senior High School is a public high school in Canton, Stark County, Ohio, U.S. It is one of the largest and oldest high schools in Ohio.

Prior to the start of the current playoff format in Ohio high school football, McKinley had won seven AP poll titles. Since the playoff format began, McKinley has won three State Titles, in 1981, 1997, and 1998. They have also been State Runner-Up three times, in 1977, 1985, and 2004.

Although heated in all sports, the McKinley-Massillon rivalry takes its most prominent form on the gridiron. McKinley-Massillon is the 13th most played rivalry in the nation, with 119 meetings between the schools. The rivalry is also tied for the nation's 14th oldest, dating back to 1894. Massillon holds the all-time edge in the series, 49-67. The rivalry was profiled in the November 14, 1994 issue of Sports Illustrated. The fans of this rivalry talk about the match-up all year. It has inspired an online forum dedicated to this match-up on both Mckinley's fan website CantonMckinley.com and a rival website, aptly named, BeatMckinley.com. Also, "The Game" is regularly a topic of conversation at bars, picnics, and even over breakfast at establishments all over Stark County Ohio. 2009 marked the 118th game between the two schools. The game was played at Pro Football Hall of Fame Field at Fawcett Stadium. Three weeks later, the two teams met for the 119th and latest time when both advanced to the third round of the playoffs at Summa Field at InfoCision Stadium.[2].

McKinley plays at Fawcett Stadium, a depression-era edifice that seats over 22,500 fans. Fawcett is also home to the NFL's annual Pro Football Hall of Fame Game (The Hall is in Canton)

McKinley posted a 10-0 record in the 2005 regular season, capping it off with a victory over archrival Massillon, 38-8. They easily handled their first two playoff opponents before falling victim to eventual State Runner-Up Massillon in the rematch, 21-3.

The Bulldogs finished with a regular season record of 9-1, their only loss coming to Massillon. The Bulldogs won their first three playoff games before falling to the Mentor Cardinals in the state Semi-finals [3]. Their final record was 12-2.

Although less intense than in football, McKinley basketball has little love for their rivals, Massillon. McKinley has a stranglehold on the all-time record, at 126-46.

McKinley plays their home games at The Memorial Fieldhouse.

McKinley finished its regular season with a record of 18-2. Its only losses were to nationally ranked powers Oak Hill Academy 51-50 and North College Hill High School 69-67. McKinley won the regular season and tournament Federal League crowns, and was also crowned Ohio Division I AP Poll Champion. McKinley cruised through the Division I playoffs and won their 2nd consecutive State Title by defeating the Trotwood-Madison Rams 63-33, tying a Division I record for lowest points allowed in a State Final. McKinley finished the 2005-2006 season ranked 2nd in the nation in the calpreps.com poll [4], 6th in the nation in the Sports Illustrated poll [5], and 10th in the nation in the USA Today poll. [6]

After losing eight seniors (and their top eight scorers) from the previous year's state champion team, McKinley finished its regular season with a record of 15-5, their worst record since the 2002-2003 season.[7] They lost to Massillon Perry in the Sectional Final, their earliest tournament exit since the 2000-2001 season.[8]