Dionysius Lardner Boursiquot (26 December c. 1820 – 18 September 1890), commonly known as Dion Boucicault, was an Irish actor and playwright famed for his melodramas. By the later part of the 19th century, Boucicault had become known on both sides of the Atlantic as one of the most successful actor-playwright-managers then in the English-speaking theatre. The New York Times heralded him in his obituary as "the most conspicuous English dramatist of the 19th century."[1]

Dionysius Lardner Boursiquot was born and educated in Dublin where he lived on Gardiner Street. His mother was Anne Darley, sister of the poet and mathematician George Darley, thus there was literary aptitude on his mother's side. The Darleys were an important Dublin family influential in many fields and related to the Guinnesses by marriage. The identity of his father is questionable. He was probably the son of Dionysius Lardner, a lodger at his mother's house at a time when she was recently separated from her husband,[2] and who supported him financially until about 1840.[3] He went to London and was enrolled at University College School at the age of 13 and also studied for a year at the University of London.

Work as actor and playwright

After a year in London, Boursiquot/Boucicault left to pursue acting in Cheltenham. He joined William Charles Macready while still young, and made his first appearance upon the stage with Benjamin Webster at Bristol, England. Soon afterwards he began to write plays, occasionally in conjunction.

His first play, A Legend of the Devil's Dyke, opened in Brighton in 1838. Three years later he found immediate success as a dramatist with London Assurance. Produced at Covent Garden on 4 March 1841, its cast included such well-known actors as Charles Mathews, William Farren, Mrs Nesbitt and Madame Vestris.

In his play The Vampire (1852), Boucicault made his début as a leading actor as the vampire 'Sir Alan Raby'. Although the play itself had mixed reviews, Boucicault's characterization was praised as "a dreadful and weird thing played with immortal genius".[5] In 1854 he wrote and played the title character in Andy Blake; or, The Irish Diamond.[6]

From 1854 to 1860, Boucicault resided in the United States, where he was always a popular favorite. Boucicault and his actress wife, Agnes Robertson, toured America. He also wrote many successful plays there, acting in most of them. These included the popular Jessie Brown; or, The Relief of Lucknow in 1858.[6]

Work as theatre manager and producer

In the summer of 1859, Boucicault took over as manager of Burton's New Theatre (originally Tripler's Theatre) on Broadway just below Amity Street. After extensive remodeling, he renamed his new showplace the Winter Garden Theatre. There on 5 December 1859, he premiered his new sensation, the anti-slavery potboiler The Octoroon, in which he also starred. This was the first play to treat seriously of the Black American population. [3] 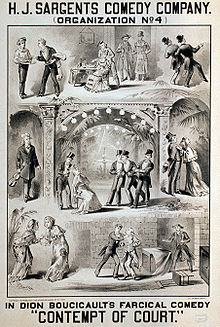 Poster for a production of Boucicault's farce Contempt of Court, c. 1879. From the Library of Congress.

On his return to England, he produced at the Adelphi Theatre a dramatic adaptation of Gerald Griffin's novel, The Collegians, entitled The Colleen Bawn. This play, one of the most successful of the times, was performed in almost every city of the United Kingdom and the United States. Although it made its author a handsome fortune, he lost it in the management of various London theatres.

After his return to England, Boucicault was asked by the noted American comedian Joseph Jefferson, who also starred in the production of Octoroon, to adapt Washington Irving's Rip van Winkle. He obliged and produced a version of the beloved American classic in 1866 that would make Jefferson one of the most famous and well-respected comedians of his age.

Boucicault's next marked success was at the Princess's Theatre, London in 1864 with Arrah-na-Pogue. He played the part of a County Wicklow, Ireland carman. This, and his admirable creation of "Conn"[7] in his play The Shaughraun (first produced at Wallacks Theatre, New York City, in 1874, then at the Theatre Royal, Drury Lane in 1875), won him the reputation of being the best "stage Irishman" of his time.

In 1875 Boucicault returned to New York City and finally made his home there. He wrote the melodrama Contempt of Court (poster, left) in 1879, but he paid occasional visits to London, where his last appearance was made in his play, The Jilt, in 1885. The Streets of London and After Dark were two of his late successes as a dramatist.

Boucicault was an excellent actor, especially in pathetic parts. His uncanny ability to play these low-status roles earned him the nickname "Little Man Dion" in theatrical circles. His plays are for the most part adaptations, but are often very ingenious in construction. They have had great popularity. 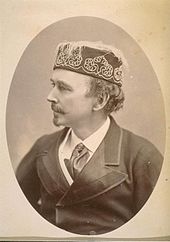 Between 11 July and 8 October 1885, Boucicault toured Australia, where his brother Arthur lived.[12] Towards the end of this tour, he suddenly left Agnes to marry Josephine Louise Thorndyke (c. 1864–1956), a young actress, on 9 September 1885, in Sydney.[12] This aroused scandal on both sides of the Atlantic Ocean, as his marriage to Agnes was not finally dissolved until 21 June 1888, by reason of bigamy with adultery. The rights to many of his plays were later sold to finance alimony payments to his second wife.[13]