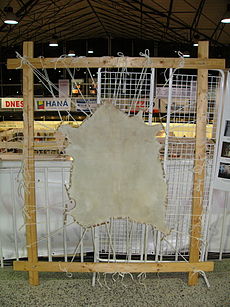 Parchment is a thin material made from calfskin, sheepskin or goatskin, often split. Its most common use was as a material for writing on, for documents, notes, or the pages of a book, codex or manuscript. It is distinct from leather in that parchment is limed but not tanned; therefore, it is very reactive to changes in relative humidity and is not waterproof. The finer qualities of parchment are called vellum. 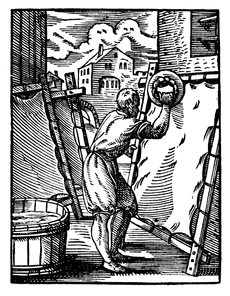 According to the Roman Varro, Pliny's Natural History records (xiii.21) that parchment was invented under the patronage of Eumenes of Pergamon,[1] as a substitute for papyrus, which was temporarily not being exported from Alexandria, its only source. The English word "parchment" derives from the name of the city where it was reportedly invented.[2]

Herodotus mentions writing on skins as common in his time, the 5th century BC; and in his Histories (v.58) he states that the Ionians of Asia Minor had been accustomed to give the name of skins (diphtherai) to books; this word was adapted by Hellenized Jews to describe scrolls.[3] Parchment, however, derives its name from Pergamon, the city where it was perfected (via the Latin pergamenum and the French parchemin). In the 2nd century B.C. a great library was set up in Pergamon that rivalled the famous Library of Alexandria. As prices rose for papyrus and the reed used for making it was over-harvested towards local extinction in the two nomes of the Nile delta that produced it, Pergamon adapted by increasing use of parchment.

Writing on prepared animal skins had a long history, however. Some Egyptian Fourth Dynasty texts were written on parchment. Though the Assyrians and the Babylonians impressed their cuneiform on clay tablets, they also wrote on parchment from the 6th century BC onward. Rabbinic culture equated the idea of a book with a parchment scroll.[citation needed] Early Islamic texts are also found on parchment.

One sort of parchment is vellum, a word that is used loosely to mean parchment, and especially to mean fine parchment, but more strictly refers to parchment made from calfskin (although goatskin can be as fine in quality). The words vellum and veal come from Latin vitulus, meaning calf, or its diminutive vitellus. In the Middle Ages, calfskin and split sheepskin were the most common materials for making parchment in England and France, while goatskin was more common in Italy. Other skins such as those from large animals such as horse and smaller animals such as squirrel and rabbit were also used. Whether uterine vellum (vellum made from aborted calf fetuses) was ever really used during the medieval period is still a matter of great controversy. 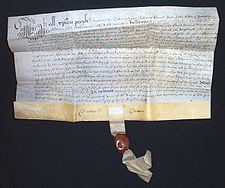 An English deed written on fine parchment or vellum with seal tag dated 1638.

There was a short period during the introduction of printing where parchment and paper were used interchangeably: although most copies of the Gutenberg Bible are on paper, some were printed on parchment. In 1490, Johannes Trithemius preferred the older methods, because "handwriting placed on parchment will be able to endure a thousand years. But how long will printing last, which is dependent on paper? For if ...it lasts for two hundred years that is a long time."[4]

In the later Middle Ages, parchment was largely replaced by paper. New techniques in paper milling allowed it to be much cheaper and more abundant than parchment. With the advent of printing in the later fifteenth century, the demands of printers far exceeded the supply of animal skins for parchment.

The heyday of parchment use was during the medieval period, but there has been a growing revival of its use among artists since the late 20th century. Although parchment never stopped being used (primarily for governmental documents and diplomas) it had ceased to be a primary choice for artist's supports by the end of 15th century Renaissance. This was partly due to its expense and partly due to its unusual working properties. Parchment consists mostly of collagen. When the water in paint media touches parchment's surface, the collagen melts slightly, forming a raised bed for the paint, a quality highly prized by some artists. Parchment is also extremely affected by its environment and changes in humidity, which can cause buckling. Some contemporary artists also prize this quality, noting that the parchment seems alive and like an active participant in making artwork. To support the needs of the revival of use by artists, a revival in the art of making individual skins is also underway. Handmade skins are usually better prepared for artists and have fewer oily spots which can cause long-term cracking of paint than mass-produced parchment. Mass-produced parchment is usually made for lamp shades, furniture, or other interior design purposes.[5]

The radiocarbon dating techniques that are used on papyrus can be applied to parchment as well. They do not date the age of the writing but the preparation of the parchment itself. However, radiocarbon dating can often be used on the inks that make up the writing, since many of them contain organic compounds such as plant leachings, soot, and wine.[citation needed]

"Parchment is prepared from pelt, i.e., wet, unhaired, and limed skin, simply by drying at ordinary temperatures under tension, most commonly on a wooden frame known as a stretching frame".[6]

After being flayed, the skin is soaked in water for about 1 day. This removes blood and grime from the skin and prepares it for a dehairing liquor.[7] The dehairing liquor was originally made of rotted, or fermented, vegetable matter, like beer or other liquors, but by the Middle Ages an unhairing bath included lime. Today, the lime solution is occasionally sharpened by the use of sodium sulfide. The liquor bath would have been in wooden or stone vats and the hides stirred with a long wooden pole to avoid contact with the alkaline solution. Sometimes the skins would stay in the unhairing bath for 8 or more days depending how concentrated and how warm the solution was kept—unhairing could take up to twice as long in winter. The vat was stirred two or three times a day to ensure the solution's deep and uniform penetration. Replacing the lime water bath also sped the process up. However, if the skins were soaked in the liquor too long, they would be weakened and not able to stand the stretching required for parchment.[7]

After soaking in water to make the skins workable, the skins were placed on a stretching frame. A simple frame with nails would work well in stretching the pelts. The skins could be attached by wrapping small, smooth rocks in the skins with rope or leather strips. Both sides would be left open to the air so they could be scraped with a sharp, semi-lunar knife to remove the last of the hair and get the skin to the right thickness. The skins, which were made almost entirely of collagen, would form a natural glue while drying and once taken off the frame they would keep their form. The stretching aligned the fibers to be more nearly nearly parallel to the surface.

To make the parchment more aesthetically pleasing or more suitable for the scribes, special treatments were used. According to Reed there were a variety of these treatments. Rubbing pumice powder into the flesh side of parchment while it was still wet on the frame was used to make it smooth and to modify the surface to enable inks to penetrate more deeply. Powders and pastes of calcium compounds were also used to help remove grease so the ink would not run. To make the parchment smooth and white, thin pastes (starchgrain or staunchgrain) of lime, flour, egg whites and milk were rubbed into the skins.[8]

Meliora di Curci in her paper "The History and Technology of Parchment Making" notes that parchment was not always white. "Cennini, a 15th century craftsman provides recipes to tint parchment a variety of colours including purple, indigo, green, red and peach." The Early medieval Codex Argenteus and Codex Vercellensis, the Stockholm Codex Aureus and the Codex Brixianus give a range of luxuriously produced manuscripts all on purple vellum, in imitation of Byzantine examples, like the Rossano Gospels, Sinope Gospels and the Vienna Genesis, which at least at one time are believed to have been reserved for Imperial commissions.

Many techniques for parchment repair exist, to restore creased, torn, or incomplete parchments.

During the seventh through the ninth centuries, many earlier parchment manuscripts were scrubbed and scoured to be ready for rewriting, and often the earlier writing can still be read. These recycled parchments are called palimpsests. Later, more thorough techniques of scouring the surface irretrievably lost the earlier text. 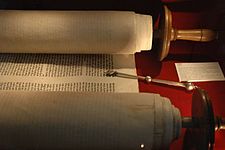 A Sefer Torah, the traditional form of the Hebrew Bible, is a scroll of parchment.
See also: Gevil, Klaf, and Duchsustus

The way in which parchment was processed (from hide to parchment) has undergone a tremendous evolution based on time and location. Parchment and vellum are not the sole methods of preparing animal skins for writing. In the Babylonian Talmud (Bava Batra 14B) Moses writes the first Torah Scroll on the unsplit cow-hide called gevil.

Parchment is still the only medium used by traditional religious Jews for Torah scrolls or Tefilin and Mezuzahs, and is produced by large companies in Israel. For those uses, only hides of kosher animals are permitted. Since there are many requirements for it being fit for the religious use, the liming is usually processed under supervision of a qualified Rabbi.[9]

Additional uses of the term

In some universities, the word parchment is still used to refer to the certificate (scroll) presented at graduation ceremonies, even though the modern document is printed on paper or thin card; although doctoral graduands may be given the option of having their scroll written by a calligrapher on vellum. The University of Notre Dame still uses animal parchment for its diplomas. Similarly, University of Glasgow and Heriot-Watt University use goat skin parchment paper for their degrees.

Vegetable (paper) parchment is made by passing a waterleaf made of pulp fibers into sulfuric acid. The sulfuric acid hydrolyses and solubilises the main natural organic polymer, cellulose, present in the pulp wood fibers. The paper web is then washed in water, which stops the hydrolysis of the cellulose and causes a kind of cellulose coating to form on the waterleaf. The final paper is dried. This coating is a natural non-porous cement, that gives to the vegetable parchment paper its resistance to grease and its semi-translucency.

Other processes can be used to obtain grease-resistant paper, such as waxing the paper or using fluorine-based chemicals. Highly beating the fibers gives an even more translucent paper with the same grease resistance. Silicone and other coatings may also be applied to the parchment. A silicone-coating treatment produces a cross-linked material with high density, stability and heat resistance and low surface tension which imparts good anti-stick or release properties. Chromium salts can also be used to impart moderate anti-stick properties.

Although the invention of the printing press led to a reduced interest in hand made cards and items, by the 18th century, people were regaining interest in detailed handwork. Parchment cards became larger in size and crafters began adding wavy borders and perforations. In the 19th century, influenced by French romanticism, parchment crafters began adding floral themes and cherubs and hand embossing.