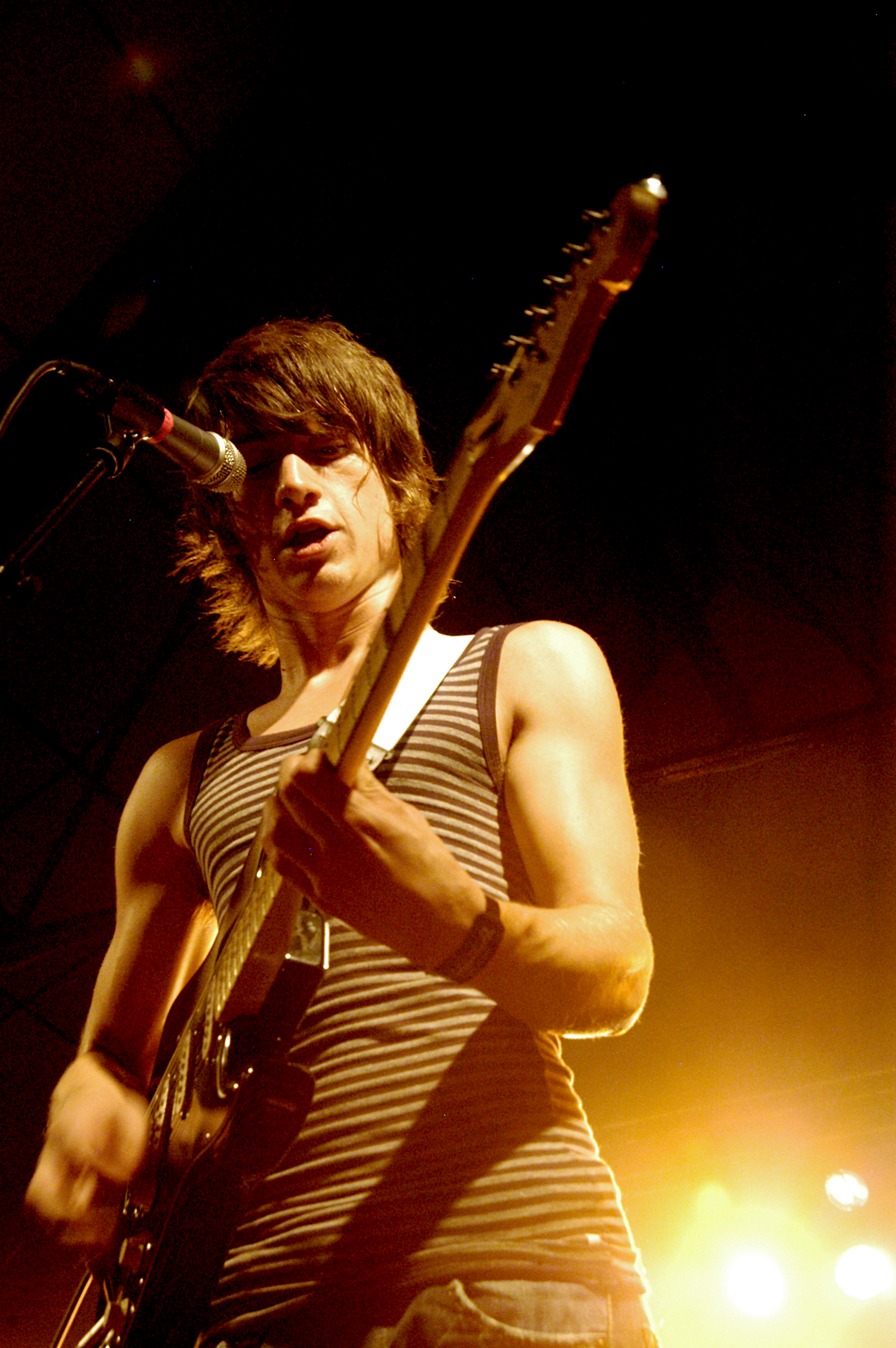 Alexander David Turner ["Index of Births, Marriages and Deaths in England and Wales, 1984-2005."] (born , ) is an English musician and member of and . He is the vocalist and lead guitarist in both bands. He is the main in the Arctic Monkeys and shares writing duties in The Last Shadow Puppets with .

Along with and ,Alex Turner attended High School, [cite news| last=Caesar| first= Ed | url=http://news.independent.co.uk/people/profiles/article2447674.ece | publisher=""| title=Alex Turner: That's what he's not. So what is he? | date= | accessdate=2008-01-05] and together with his neighbour , formed in . From his time working at the bar in local concert venues, Turner was "really annoyed [by] bands coming on and saying 'We've got CDs at the back for sale - three pounds each'... you'd think 'Fuck off, who do you think you are?'"

Turner has always been the band's main songwriter, and his observations of have drawn comparisons to ' frontman Mike Skinner. However, Turner has admitted that during the early days of the band "nobody wanted to admit they wrote [the lyrics] so we kept trying other singers so they'd do it for us." Despite enjoying songwriting, Turner shied away from acknowledgment because he "didn't want to have piss took out of [him] !" However, he has suggested that he has always enjoyed songwriting and that since getting his guitar, has spent most of his spare moments penning new lyrics, as "that’s what [he] 'd feel comfortable doing."

"I'll think about something and I'll be writing, penning something down and I'll keep building on that. The best stuff comes when I’ve got a melody and a rhythm so I know how many syllables each line is going to have and then build it up from there, and make it a whole thing, and try and pay attention to every aspect."

In August 2007 plans were announced for Turner to record an album with friend and producer James Ford. Kane, of Arctic Monkeys support act The Rascals, announced the project on . The project features Turner and Kane sharing vocal, guitar and bass duties with Ford playing drums. [ [http://www.digitalspy.co.uk/music/a69219/arctic-monkey-plans-side-project.html Arctic Monkey plans side project] ] also features on the album. The duo have called themselves , the album is called "", and was released on the , and reached the number one spot in its first week. They recently did a small tour backed by the , starting at on 19 August 2008. [cite web | url=http://www.telegraph.co.uk/arts/main.jhtml?xml=/arts/2008/08/20/bmpuppet120.xml | title=The Last Shadow Puppets review: satisfied relief | first=Thomas H | last=Green | work= | publisher= | date=2008-08-20 | accessdate=2008-09-22 ]

Turner worked with on the song "Temptation" from Dizzee Rascal's album "". He also worked with Dizzee Rascal on a different version of the same song "Temptation Greets You Like Your Naughty Friend" which featured on the "" single. Turner also features in the song "The Machine" and features on guitar in the song "Sex With The Ex" from their debut album "", on which he also co-wrote some of the songs with McClure. reported that Turner was working with Alison Mosshart of . Arctic Monkeys have gone to California to record some songs for their new album with of . [NME.COM, 9 September 2008]

Turner used to play a Fender Arctic White American standard , and later a black Mexican standard Fender guitar, both sporting maple fretboards, until the release of the band's single "" and the second album "". When touring the new album he uses a black with a black pickguard and rosewood fretboard, a guitar discontinued by Fender. Also, during live performances of "If You Were There, Beware", he uses a Spectra Sonic. During the earlier days he used Orange AD30T amplifiers.

Turner has maintained a very private life, and shunned media publicity when declared the "Coolest Man On The Planet" by "" magazine in . [ [http://www.threadsproductions.com/index.php?option=com_frontpage&Itemid=179 Threads - Home ] ] He supports . "Blender" magazine has described him as "the least talkative member of the group, chewing over his answers for so long that he ends up doubting his own words".

Previous to recording 'Favourite Worst Nightmare', Alex dated , with whom he co-wrote ''. She is a member of band Totalizer and current girlfriend of , guitarist in Kings of Leon. [cite web | url=http://www.guardian.co.uk/uk/2007/jul/15/musicnews.music | title=Ex-girlfriend helps Arctic Monkeys to a hit | first=Jaimie | last=Hodgson | work= | publisher=Guardian News and Media | date=2007-07-15 | accessdate=2008-08-23 ]