Kodiak Airport (IATA: ADQ, ICAO: PADQ, FAA LID: ADQ) is a joint civil-military public airport located 4 nautical miles (7 km; 5 mi) southwest of the central business district of Kodiak, a city on Kodiak Island in the U.S. state of Alaska. The airport is state-owned and operated by the Alaska Department of Transportation & Public Facilities (DOT&PF) and is home to the colocated Coast Guard Air Station Kodiak.[1]

The airport is on the site of the former Naval Air Station Kodiak which was commissioned in 1941. NAS Kodiak was closed and placed in caretaker status in 1950, with the exception of runways and other facilities used by or conveyed to the Coast Guard. [2]

In 1947, a U.S. Coast Guard Air Detachment was commissioned at NAS Kodiak, which was formally named Coast Guard Air Station Kodiak in 1964. In 1971, the U.S. Navy turned all airport runways and all remaining areas in caretaker status to the north over to the State of Alaska. CGAS Kodiak remains in operation at this location with four HC-130 Hercules, five HH-60J Jayhawk and five HH-65C Dolphin aircraft. [3] [4] [5] 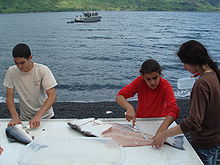 Teenage tourists filleting fish at a lodge on Raspberry Island. The fish is immediately vacuum packed and frozen then put into coolers and checked on as baggage at Kodiak Airport upon departure. Almost all air travellers leaving Kodiak airport have several coolers containing frozen fish they caught themselves and both Kodiak and Anchorage airports have freezers to keep these traveller's fish frozen in case of delay. 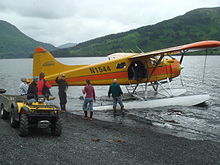 A De Haviland Beaver, part of the Andrew's Airways fleet dropping off tourists at a remote lodge on Raspberry Island (Alaska)

Charters are generally available to the Kodiak archipelago and Katmai coast.