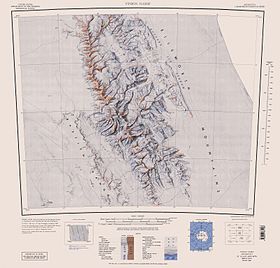 Map of most of the Sentinel Range, Ellsworth Mountains with Vinson Massif.

/ˈvɪnsən mæˈsiːf/) is the highest mountain of Antarctica, lying in the Sentinel Range of the Ellsworth Mountains, which stand above the Ronne Ice Shelf near the base of the Antarctic Peninsula. The massif is located about 1,200 kilometres (750 mi) from the South Pole and is about 21 km (13 mi) long and 13 km (8.1 mi) wide.[4] At 4,892 metres (16,050 ft) the highest point is Mount Vinson, which was named in 2006 after Carl Vinson, long-time member of the U.S. Congress from the state of Georgia.[5]

Vinson Massif was first seen in 1958 and first climbed in 1966. An expedition in 2001 was the first to climb via the Eastern route, and also took GPS measurements of the height of the peak.[6] As of February 2010, 700 climbers have attempted to reach the top of Mount Vinson.[7]

The massif extends between Goodge Col and Branscomb Glacier to the northwest, Nimitz Glacier and Gildea Glacier to the southwest and south, Dater Glacier and its tributary Hinkley Glacier to the east. The southeastern part of the massif ends at Hammer Col, which joins it to the Craddock Massif, of which the highest point is Mount Rutford (4,477 metres / 14,688 feet). The massif comprises both the high central Vinson Plateau with its few peaks rising to over 4,700 metres (15,400 ft), and several side ridges mostly trending southwest or northeast from the plateau.

The current height (16,066 ft/4,897 m) resulted from a GPS survey by the 2004 Omega Foundation team comprising Damien Gildea of Australia (leader) and Rodrigo Fica and Camilo Rada of Chile.[8] Since 1998 and continuing through 2007, the Omega Foundation has placed a GPS receiver on the summit for a suitable period of time to obtain accurate satellite readings.[8]

The climate on Vinson is generally controlled by the polar ice cap's high-pressure system, creating predominantly stable conditions but, as in any polar climate, high winds and snowfall are a possibility. Though the annual snowfall on Vinson is low, high winds can cause base camp accumulations up to 46 centimetres (18 in) in a year. During the summer season, November through January, there are 24 hours of sunlight. While the average temperature during these months is −30 °C (−20 °F), the intense sun will melt snow on dark objects.[citation needed]

Over successive years, the limited amount of snow that falls on Vinson Massif compacts and is transformed into ice, forming glaciers. These glaciers follow the topography and flow down the mountains valleys.[9] The uppermost glacier occupies the north face of Vinson, and flows either into Branscomb Glacier to the west or Crosswell Glacier to the east. The Crosswell Glacier flows into the Rutford Ice Stream via Ellen Glacier.[9]

A high mountain, provisionally known as 'Vinson', was long suspected to be in this part of West Antarctica, but it was not actually seen until January 1958, when it was spotted by US Navy aircraft from Byrd Station. It was named after Carl Vinson (also the namesake of an aircraft carrier), a United States Georgia Congressman who was a key supporter of funding for Antarctic research.[4] The first measurement of the Vinson Massif was established in 1959 at the elevation of 5,140 m (16,864 ft).[4]

In the months prior to its departure for Antarctica the expedition received considerable press attention, primarily because of the reports that Woodrow Wilson Sayre was planning to fly in a Piper Apache piloted by Max Conrad, the "flying Grandfather", with four companions into the Sentinel Range to climb the Vinson Massif. Sayre had a reputation for problematic trips as a result of his unauthorized, unsuccessful, and nearly fatal attempt to climb Mount Everest from the North in 1962. His unauthorized incursion into Tibet led China to file an official protest with the U.S. State Department. In the end, the purported race did not materialize as Conrad had difficulties with his plane. According to press reports, he and Sayre were still in Buenos Aires on the day the first four members of AAME 1966/67 reached Vinson's summit.

In December 1966 the Navy transported the expedition and its supplies from Christchurch, New Zealand to the U.S. base at McMurdo Sound, Antarctica, and from there in a ski-equipped C-130 Hercules to the Sentinel Range. All members of the expedition reached the summit of the Vinson Massif. The first group of four climbers summited on December 18, 1966, four more on December 19, and the last three on December 20.

The climb of Vinson offers little technical difficulty beyond the usual hazards of travel in Antarctica, and as one of the Seven Summits, it has received much attention from well-funded climbers in recent years.[11] Multiple guide companies offer guided expeditions to Vinson, at a typical cost of around $30,000 per person, including transportation to Antarctica from Chile. As of 2010, nearly 2000? people have summited Mount Vinson.

First ascent from east side

While the vast majority of prior climbs to the summit have used the western side of the massif from the Branscomb Glacier, the first ascent from the east side was successfully completed by an eight-person team sponsored by NOVA in January 2001.[6] The team consisted of:

The team not only made the first ascent from the east side but also performed scientific research into snow accumulation at different elevations as well as taking the first ground based GPS reading from the summit. The GPS reading gave the elevation of the highest point in Antarctica as 16,077 ft (4,900 m), eclipsing the earlier established heights recorded in 1959 and 1979.

Another first was the successful aircraft landing of a Twin Otter on the Upper Dater Glacier on the eastern slopes of Vinson Massif.

NOVA named the production "Mountain of Ice", which first aired on PBS in February 2003.[6]