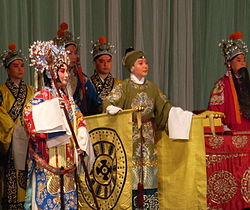 Dan (Chinese language: 旦角) is the general name for female roles in Chinese opera, often referring to leading roles. There are a few different kinds of dan in Chinese opera. The commonly seen ones are 'Guimen Dan', 'Hua Dan', 'Daoma Dan', 'Wu Dan', 'Lao Dan' and 'Cai Dan'. Each different kind of dan has its own unique characteristics.

Guimen Dan (闺门旦) is the role of the virtuous lady. It is also known as Qingyi (青衣）or Zhengdan (正旦). Qingyi means 'green robes' in Chinese, although the term traditionally extends to the colour black. This kind of dan used to wear black robes. Qing Yi are normally mature and sometimes married women. They may be rich or poor, young or of middle age, but they have to be mature women to fall under this category. Qingyi focus more on singing and they have little movement. They sing in a very high pitched and piercing voice which many people who do not appreciate Chinese opera find difficult to like. Opera schools in China have difficulty recruiting students for this kind of role, since it requires a good voice, good looks and a good height. The most famous qingyi of the last century was Mei Lanfang. Examples of Guimen Dan are Du Liniang (杜丽娘) from The Peony Pavilion (牡丹亭) and Wang Baochuan (王宝钏）from Wujiapo （武家坡).

Hua Dan (花旦) are lively, vivacious young female characters. They normally wear short blouses with pants or skirts. Unlike the Guimen Dan, the Hua Dan focuses more on movements and speech. They must be able to speak quickly and clearly. They also need to project an image of cuteness and innocence as Hua Dan always represent girls of around 12–16 years old. Often, a Guimen Dan is accompanied by a Hua Dan maid. Hong Niang (红娘) of the Romance of the West Chamber (西厢记) and Yan Xijiao (阎惜姣) of Wulongyuan (乌龙院) have involved the role of Hua Dan.

Daoma Dan (刀马旦) are young female warriors. The name Daoma Dan, meaning "sword and horse dan", indicates the style of performance which usually involves horse riding with a spear. This category is superficially similar to Wu Dan (武旦) but there is a difference. Daoma Dan do not fight as much as Wu Dan. They do more stunts and dancing with the spear or whatever weapons they have. Daoma Dan need to sing, which is performed while dancing or doing stunts and requires great stamina. Daoma Dan usually wear female warrior costumes with the flags behind. Examples of Daoma Dan are Liang Hongyu (梁红玉) and Mu Guiying (穆桂英). Daoma dan (刀马旦) is also the original Chinese title of the 1986 Hong Kong film Peking Opera Blues, directed by Tsui Hark.

Wu Dan (武旦) specialise in fighting with all kinds of weapons. The Wu Dan engage in fighting with opponents besides just doing stunts. In the past, the Wu Dan needed to perform cai qiao (踩跷), which the Daoma Dan did not do. Cai qiao is a very difficult skill requiring the actress to stand on tip toe throughout the whole show. The actress will wear something akin to high heels shoes, but the heels of this special kind of shoe are so high that the actress is practically standing on tip toe. Fake small shoes are then attached underneath so that it appears that the actress has very small feet. It is an imitation of the foot binding practice. Wu Dan must master many acrobatic movements. They specialise only in fighting hence they seldom sing or speak. Examples of Wu Dan are Zhizhu Jing (蜘蛛精) of Pansidong (盘丝洞) and Hu San Niang (扈三娘) of Hujiazhuang (扈家庄).

Lao Dan (老旦) are older women (lao means "old"). They have their own set of movements and gestures and singing styles, different from qingyi. Qingyi sing in high pitched and piercing voices while Lao Dan sing in a lower pitched voice. Lao Dan costumes are also less vibrant compared to other female roles and they have much simpler hair styles. An example is She Tai Jun (舍太君) of Yang Men Nu Jiang (杨门女将).

Cai Dan (彩旦) are the clownish female roles. Cai Dan do not act like normal Dan and they do clownish gestures. Their movements resemble normal daily movements and they speak in normal voices. Clownish dans are now normally performed by men; hence they are physically unattractive, which is exaggerated by their hideous make up.