Mandarin Oriental, Hong Kong (Chinese: 香港文華東方酒店) is a five-star hotel, located on Connaught Road in Central, Hong Kong, owned and managed by Mandarin Oriental Hotel Group. The hotel opened its doors in 1963 as “The Mandarin”, and quickly drew recognition for its service and elegance. In 1967, after four years of operation, The Mandarin was listed by Fortune magazine alongside the Ritz in Paris, the Grand in Rome and the Connaught in London as one of the eleven great hotels in the world[1]. In 2005, the hotel spent USD 150 million to renovate its 501 guestrooms, 10 restaurants, and numerous public spaces, as well as to construct the three-story Mandarin Spa, one of only three Forbes Five-Star spas in Hong Kong[2][3].

Mandarin Oriental, Hong Kong, originally called The Mandarin, was built on the former site of the colonial Queen’s Building on the waterfront in Central Hong Kong. From the onset, the concept was to create a hotel firmly rooted in Eastern culture, providing gracious service to a standard generally only experienced in Asia[4]. The original cost of construction totaled HKD 42 million, while the interior design amounted to even 50% more at HKD 66 million, sparing no luxury or detail. John Howarth of Leigh & Orange architectural firm was hired to design the building while the interior was entrusted to Don Ashton, a Hollywood Art Director for such films as The Bridge on the River Kwai, Indiscreet, and Billy Budd[5]. The Mandarin officially opened for business in October 1963, and at 26 storeys, it was the tallest building in Hong Kong. In addition to its record-setting height, the hotel was the first in Hong Kong to have direct dial phones and the first in Asia to include a bath in every guestroom[6]. The hotel quickly drew recognition for its service and elegance, and back in 1967 was listed by Fortune magazine alongside the Ritz in Paris, the Grand in Rome, and the Connaught in London as one of the eleven great hotels in the world[7]. In 2009 Conde Naste rated the hotel as number 88 [8]. 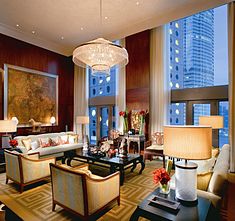 In 1974, the owners of The Mandarin established a hotel management company, Mandarin International Hotels Limited. The Group's intention was to expand into Asia and operate hotels that would reflect the standard of service synonymous with their property in Hong Kong[9]. That same year, the company's hotel interests grew further through the acquisition of a 49% interest in The Oriental, Bangkok. The Oriental, built in 1876, was already a well-known property and acknowledged as one of the Far East's great hotels. Through the management of both The Mandarin in Hong Kong and The Oriental, Bangkok, the Group was in an unusual position of having two "flagship" hotels whose names were among the best in hospitality. In 1985, the Company rationalized its corporate structure by combining these two renowned properties under a common name, Mandarin Oriental Hotel Group[10].

The Mandarin Oriental, Hong Kong has been noted for its interior decoration, once teased by Dame Edna Everage for its 'ridiculous chandeliers' [11]. In 2005, authorization was given for a total renovation of the hotel, and when its doors closed in December of that year the trading floor of the stock exchange held a mock two-minute silence in memory of the hotel. Nonetheless, after a USD 150 million renovation, Mandarin Oriental, Hong Kong re-opened its doors on September 28, 2006, marking the event with a black-tie gala hosted by Dame Edna Everage with a performance by Bryan Ferry[12]. The renowned lobby, Captain’s Bar, The Clipper Lounge, and Chinnery Bar remained recognisable after the renovation, but the remaining restaurants, bars, public spaces, and rooms were entirely new[13]. 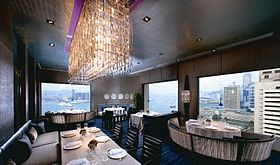