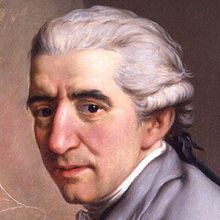 from a larger painting by John Francis Rigaud.[1]

His first lessons were given him by a Florentine of English descent, Ignatius Hugford, and then under Anton Domenico Gabbiani. He was in Rome from 1750–1753, where he became acquainted with Sir William Chambers, the architect, and Joseph Wilton, the sculptor, whom he accompanied to England in August 1755.

He had already painted two pictures for the abbey of San Michele in Pelago, Pistoia, which had brought him reputation, and on his arrival in England he was patronized by Lord Tilney, the duke of Richmond and other noblemen. His acquaintance with Sir William Chambers no doubt helped him on, for when this architect designed the Albany in London for Lord Holland, Cipriani painted a ceilings, He also painted part of a ceiling in Buckingham House, and a room with poetical subjects at Standlynch in Wiltshire.

Among his masterpieces were his work for Somerset House, built by his friend Chambers. He not only prepared the decorations for the interior of the north block, but says Joseph Baretti in his Guide through the Royal Academy (1780), "the whole of the carvings in the various fronts of Somerset Place — excepting Bacon's bronze figures — were carved from finished drawings made by Cipriani." These designs include the five masks forming the keystones to the arches on the courtyard side of the vestibule, and the two above the doors leading into the wings of the north block, all of which are believed to have been carved by Nollekens. The grotesque groups flanking the main doorways on three sides of the quadrangle and the central doorway on the terrace appear also to have been designed by Cipriani.

The apartments in Sir William Chambers's stately palace that were assigned to the Royal Academy, into which it moved in 1750, owed much to Cipriani's graceful, if mannered, pencil. The central panel of the library ceiling was painted by Sir Joshua Reynolds, but the four compartments in the coves, representing Allegory, Fable, Nature and History, were Cipriani's. These paintings still remain at Somerset House, together with the emblematic painted ceiling, also his work, of what was once the library of the Royal Society.

It was natural that Cipriani should thus devote himself to adorning the apartments of the academy, since he was an original member (1768) of that body, for which he designed the diploma so well engraved by Bartolozzi. In recognition of his services in this respect the members presented him in 1769 with a silver cup with a commemorative inscription. He was much employed by the publishers, for whom he made drawings in pen and ink, sometimes coloured. His friend Bartolozzi engraved most of them. Drawings by him are in both the British Museum and Victoria and Albert Museum. His best autograph engravings are "The Death of Cleopatra," after Benvenuto Cellini; "The Descent of the Holy Ghost," after Gabbiani; and portraits for Hollis's memoirs, 1780. He painted allegorical designs for the Gold State Coach — which is still in use and also The Lord Mayor's Gold Coach,built in 1762 and 1757 respectively — in 1782, and repaired Verrio's paintings at Windsor and Rubens's ceiling in the Banqueting House at Whitehall.

Some of his best work is the decoration of furniture. He designed many groups, of nymphs and amorini and medallion subjects to form the centre of Pergolesi's bands of ornament, and they were continually reproduced upon the elegant satin-wood furniture which was growing popular in his later days and by the end of the 18th century became a rage. Sometimes these designs were inlaid in marqueterie, but most frequently they were painted upon the satin-wood by other hands with delightful effect, since in the whole range of English furniture there is nothing more enchanting than really good finished satin-wood pieces. There can be little doubt that some of the beautiful furniture designed by the Adams was actually painted by Cipriani himself. He also occasionally designed handles for drawers and doors. Cipriani died at Hammersmith and was buried at Chelsea, where Bartolozzi erected a monument to his memory. He had married an English lady, by whom he had two sons.