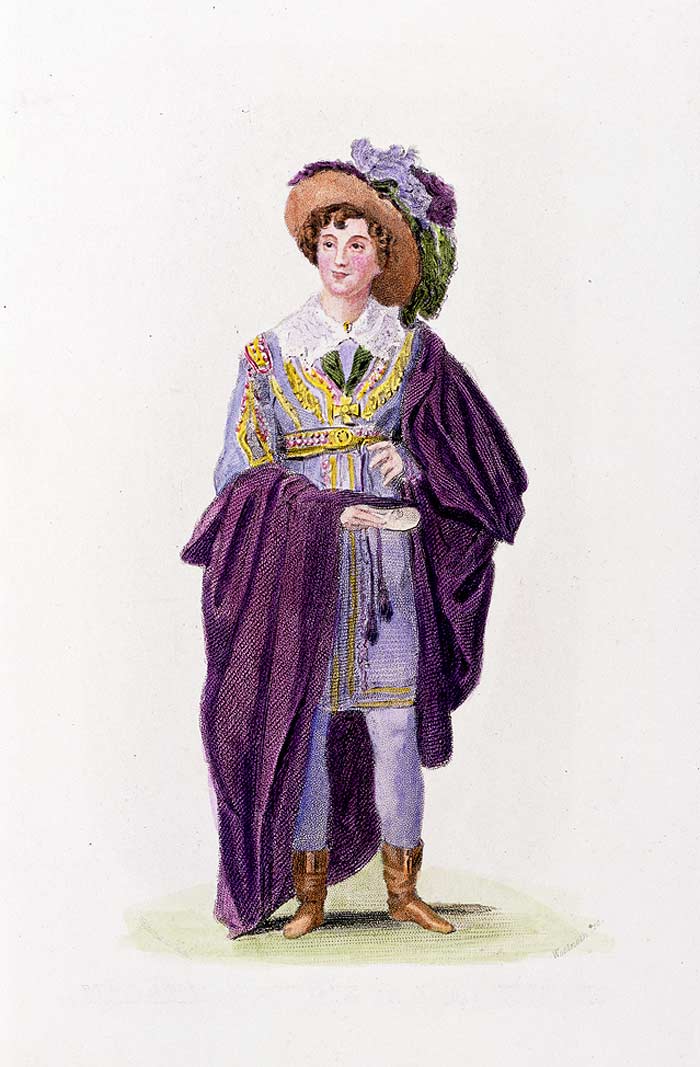 She was born Lucia Bartolozzi in , the daughter of Gaetano Stefano Bartolozzi (1757-1821) and granddaughter of , the . In 1813 she married Auguste Armand Vestris, who deserted her four years later. Her voice and attractive appearance had gained "Madame Vestris" her first leading role in Italian in the title-role of Peter Winter's "II ratio di Proserpina" at the King's Theatre in 1815. She had immediate success in both London and , where she played Camille to Talma's in "Horace". Her first hit in English was at in 's (1756-1818) "Siege of Belgrade" (1820). She was particularly a favourite in "breeches parts," like Cherubino in the "", and in "", and with such introduced songs as "," "Meet me by moonlight alone," "I've been roaming," etc.

In 1831, having accumulated a fortune, she became lessee of the , and began the presentation of a series of s and extravaganzas&mdash;for which she made this house famous. She married in 1838, accompanying him to America and aiding him in his subsequent managerial ventures, including the management of the Lyceum Theatre and the theatre in . They inaugurated their management of Covent Garden with the first known production of "" since 1605; Vestris played Rosaline. In 1840 she staged one of the first relatively uncut productions of "", in which she played Oberon, beginning a tradition of female Oberons that lasted for seventy years.

Her last appearance (1854) was for Charles's benefit, in an adaptation of Madame de Girardin's "La Joie fait pour", called "Sunshine through Clouds", and she died in London. Her musical accomplishments and education were not sufficient to distinguish her in grand opera, and in high she was only moderately successful. But in plays like "Loan of a Lover", "Paul Pry", "Naval Engagements", etc., she was delightfully arch and bewitching.

*F. E. Halliday, "A Shakespeare Companion 1564-1964," Baltimore, Penguin, 1964.
* [http://www-personal.umd.umich.edu/~nainjaun Profile of Vestris and others who worked with James Planche]