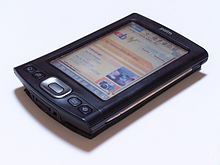 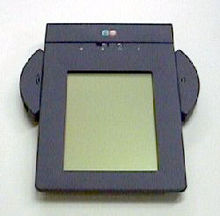 A personal digital assistant (PDA), also known as a palmtop computer, or personal data assistant,[1][2] is a mobile device that functions as a personal information manager. Current PDAs often have the ability to connect to the Internet. A PDA has an electronic visual display, enabling it to include a web browser, but some newer models also have audio capabilities, enabling them to be used as mobile phones or portable media players. Many PDAs can access the Internet, intranets or extranets via Wi-Fi or Wireless Wide Area Networks. Many PDAs employ touchscreen technology.

The first PDA was released in 1986 by Psion, the Organizer II. Followed by Psion's Series 3, in 1991, which began to resemble the more familiar PDA style. It also had a full keyboard. [3][4]

The term PDA was first used on January 7, 1992 by Apple Computer CEO John Sculley at the Consumer Electronics Show in Las Vegas, Nevada, referring to the Apple Newton. In 1996, Nokia introduced the first mobile phone with full PDA functionality, the 9000 Communicator, which grew to become the world's best-selling PDA. The Communicator spawned a new category of mobile phones: the "PDA phone", now called "smartphone". Another early entrant in this market was Palm, with a line of PDA products which began with the March 1996 Pilot 1000.

Today, almost all PDAs are smartphones. Over 150 million smartphones are sold each year, while "stand-alone" PDAs without phone functionality sell only about 3 million units per year.[5]

A typical PDA has a touchscreen for entering data, a memory card slot for data storage, and IrDA, Bluetooth and/or Wi-Fi. However, some PDAs may not have a touch screen, using softkeys, a directional pad, and a numeric keypad or a thumb keyboard for input; this is typically seen on telephones that are incidentally PDAs.

In order to have the functions expected of a PDA, a device's software typically includes an appointment calendar, a to-do list, an address book for contacts, a calculator, and some sort of memo (or "note") program. PDAs with wireless data connections also typically include an email client and a Web browser.

Many of the original PDAs, such as the Apple Newton and Palm Pilot, featured a touchscreen for user interaction, having only a few buttons—usually reserved for shortcuts to often-used programs. Touchscreen PDAs, including Windows Mobile devices, may have a detachable stylus to facilitate making selections. The user interacts with the device by tapping the screen to select buttons or issue commands, or by dragging a finger or the stylus on the screen to make selections or scroll.

Typical methods of entering text on touchscreen PDAs include:

Despite rigorous research and development projects, end-users experience mixed results with handwriting recognition systems. Some find it frustrating and inaccurate, while others are satisfied with the quality of the recognition.[6]

Touchscreen PDAs intended for business use, such as the BlackBerry and Palm Treo, usually also offer full keyboards and scroll wheels or thumbwheels to facilitate data entry and navigation.

Many touchscreen PDAs support some form of external keyboard as well. Specialized folding keyboards, which offer a full-sized keyboard but collapse into a compact size for transport, are available for many models. External keyboards may attach to the PDA directly, using a cable, or may use wireless technology such as infrared or Bluetooth to connect to the PDA.

Although many early PDAs did not have memory card slots, now most have either some form of Secure Digital (SD) slot or a CompactFlash slot. Although originally designed for memory, Secure Digital Input/Output (SDIO) and CompactFlash cards are available that provide accessories like Wi-Fi or digital cameras, if the device can support them. Some PDAs also have a USB port, mainly for USB flash drives.[dubious – discuss] Some PDAs use microSD cards, which are electronically compatible with SD cards, but have a much smaller physical size.

While early PDAs connected to a user's personal computer via serial ports or another proprietary connection,[specify] many today connect via a USB cable. PDAs are not typically able to connect to each other via USB, as USB requires one machine to act as a "host," which isn't a typical PDA function.

Some early PDAs were able to connect to the Internet indirectly by means off an external modem connected via the PDA's serial port or "sync" connector,[7] or directly by using an expansion card that provided an Ethernet port.

Most modern PDAs have Bluetooth a popular wireless protocol for mobile devices. Bluetooth can be used to connect keyboards, headsets, GPS receivers, and other nearby accessories. It's also possible to transfer files between PDAs that have Bluetooth.

Many modern PDAs have Wi-Fi wireless network connectivity, and can connect to Wi-Fi hotspots.

All smartphones, and some other modern PDAs like the Apple iPod touch, can connect to Wireless Wide Area Networks, such as those provided by cellular telecommunications companies.

Older PDAs from the 90s to 2006 typically had an IrDA (infrared) port allowing short-range, line-of-sight wireless communication. Few current models use this technology, as it has been supplanted by Bluetooth and Wi-Fi. IrDA allows communication between two PDAs, or between a PDA and any device with an IrDA port or adapter. Some printers have IrDA receivers,[8] allowing IrDA-equipped PDAs to print to them, if the PDA's operating system supports it. Most universal PDA keyboards use infrared technology because many older PDAs have it.[citation needed] Infrared technology is low-cost and has the advantage of being allowed aboard aircraft.

Most PDAs can synchronize their data with applications on a user's personal computer. This allows the user to update contact, schedule, or other information on their computer, using software such as Microsoft Outlook or ACT!, and have that same data transferred to PDA—or transfer updated information from the PDA back to the computer. This eliminates the need for the user to update their data in two places.

Synchronization also prevents the loss of information stored on the device if it is lost, stolen, or destroyed. When the PDA is repaired or replaced, it can be "re-synced" with the computer, restoring the user's data.

Some users find that data input is quicker on their computer than on their PDA, since text input via a touchscreen or small-scale keyboard is slower than a full-size keyboard. Transferring data to a PDA via the computer is therefore a lot quicker than having to manually input all data on the handheld device.[citation needed]

These programs allow the PDA to be synchronized with a personal information manager, which may be part of the computer's operating system, provided with the PDA, or sold separately by a third party. For example, the RIM BlackBerry comes with RIM's Desktop Manager program, which can synchronize to both Microsoft Outlook and ACT!.

Third-party synchronization software is also available for some PDAs from companies like CommonTime and CompanionLink. Third-party software can be used to synchronize PDAs to other personal information managers that are not supported by the PDA manufacturers (for example, GoldMine and IBM Lotus Notes).

Some PDAs can synchronize some or all of their data using their wireless networking capabilities, rather than having to be directly connected to a personal computer via a cable.

Apple iOS devices, like the iPhone, iPod Touch, and iPad, can use Apple's MobileMe subscription service to synchronize calendar, address book, mail account, Internet bookmark, and other data with one or more Macintosh or Windows computers using Wi-Fi or cellular data connections.[9]

Palm's webOS smartphones primarily sync with the cloud. For example, if Gmail is used, information in contacts, email, and calendar can be synchronized between the phone and Google's servers.

Some PDAs include Global Positioning System (GPS) receivers; this is particularly true of smartphones. Other PDAs are compatible with external GPS-receiver add-ons that use the PDA's processor and screen to display location information.[12]

PDAs with GPS functionality can be used for automotive navigation. PDAs are increasingly being fitted as standard on new cars.

Many companies have developed PDA products aimed at the medical professions' unique needs, such as drug databases, treatment information, and medical news. Services such as AvantGo translate medical journals into PDA-readable formats. WardWatch organizes medical records, providing reminders of information such as the treatment regimens of patients and programs to doctors making ward rounds. Pendragon and Syware provide tools for conducting research with PDAs, allowing the user to enter data into a centralized database using their PDA. Microsoft Visual Studio and Sun Java also provide programming tools for developing survey instruments on the handheld. These development tools allow for integration with SQL databases that are stored on the handheld and can be synchronized with a desktop- or server-based database.

PDAs have been shown to aid diagnosis and drug selection and some studies[who?] have concluded that when patients use PDAs to record their symptoms, they communicate more effectively with hospitals during follow-up visits.

The development of Sensor Web technology may lead to wearable bodily sensors to monitor ongoing conditions, like diabetes or epilepsy, which would alert patients and doctors when treatment is required using wireless communication and PDAs.

As mobile technology becomes more common, it is increasingly being used as a learning tool. Some educational institutions have embraced M-Learning, integrating PDAs into their teaching practices.

PDAs and handheld devices are allowed in many classrooms for digital note-taking. Students can spell-check, modify, and amend their class notes on the PDA. Some educators[who?] distribute course material through the Internet or infrared file-sharing functions of the PDA. Textbook publishers have begun to release e-books, or electronic textbooks, which can be uploaded directly to a PDA, reducing the number of textbooks students must carry.[13]

PDAs may be used by music enthusiasts to play a variety of music file formats. Many PDAs include the functionality of an MP3 player.

Underwater divers can use PDAs to plan breathing gas mixtures and decompression schedules using software such as "V-Planner."

PDAs for people with disabilities

PDAs offer varying degrees of accessibility for people with differing abilities, based on the particular device and service. People with vision, hearing, mobility, or speech impairments may be able to use PDAs on a limited basis. This use may be enhanced by accessibility software (e.g., speech recognition for verbal input instead of manual input). Universal design is relevant to PDAs as well as other technology, and a viable solution for many user-access issues, though it has yet to be consistently integrated into the design of popular consumer PDA devices.