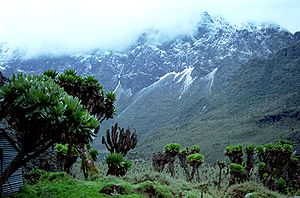 The mountains formed about three million years ago in the late Pliocene as a result of an uplifted block of crystalline rocks such as: gneiss, amphibolite granite and quartzite,[1] "pushed up by tremendous forces originating deep within the earth’s crust".[2] This uplift divided the paleolake Obweruka and created two of the present-day African Great Lakes: Albert and Edward[1] and George[3] on the flanks of the Albertine (western) Rift of the East African Rift, the African part of the Great Rift Valley.

The range is about 120 km (75 mi) long and 65 km (40 mi) wide. It consists of six massifs separated by deep gorges: Mount Stanley (5,109m), Mount Speke (4,890m), Mount Baker (4,843m), Mount Emin (4,798m), Mount Gessi (4,715m) and Mount Luigi di Savoia (4,627m).[2] Mount Stanley is the largest and has several subsidiary summits, with Margherita Peak being the highest point. The rock is metamorphic, and the mountains are believed to have been tilted and squeezed upwards by plate movement. They are in an extremely humid area, and frequently enveloped in clouds.

In 150 AD the Alexandrian Greek geographer Ptolemy referred to a snowcapped massif in the heart of Africa by the name of Lunae Montes, or Mountains of the Moon. These are now widely accepted to be the Rwenzori Mountains.

The first modern European sighting of the Rwenzori was by the expedition of Henry Morton Stanley in 1889 (the clouds possibly being the reason two decades of previous explorers had not seen them). On June 7, the expedition's second-in-command and its military commander, William Grant Stairs, climbed to 10,677 feet, the first known non-African ever to climb in the range. The first ascent to the summit was made by the Duke of the Abruzzi in 1906. His expedition quickly made first ascents of all major snow and ice peaks, mapping their complex geography, and leaving them with Italian names. His team consisted of mountain guides, biologists, surveyors, a geologist, photographers, and some one hundred and fifty porters. Photographer Vittorio Sella took a number of photographs showing a now-vanished world. Sella's photographic work is conserved at the Museo Nazionale della Montagna, in Torino, and at the Istituto di Fotografia Alpina Vittorio Sella, in Biella, both in Italy. The Makerere University, Uganda, also has a selection of his images.[4]

The Rwenzori range is the home of the Konjo and Amba peoples. In the early 1900s, these two tribes were added to the Toro Kingdom by the colonial powers. The Konjo and Amba began to agitate for separation from Toro in the 1950s, a movement that became Rwenzururu, an armed secessionist movement, by the mid-1960s. The insurgency ended through a negotiated settlement in 1982, though the Rwenzururu Kingdom was acknowledged by the government in 2008.

The Rwenzori are known for their vegetation, ranging from tropical rainforest through alpine meadows to snow; and for their animal population, including forest elephants, several primate species and many endemic birds. The range supports its own species and varieties of giant groundsel and giant lobelia and even has a six metre high heather covered in moss that lives on one of its peaks. Most of the range is now a World Heritage Site and is covered jointly by The Rwenzori Mountains National Park in Uganda and the Parc National des Virunga in Congo.[2]

Although the flora in the Rwenzori is closely related to that of other East-African high mountains it is much more luxuriant here. This is mainly a result of the high and regular rainfall in the area. The distribution of vegetation is for a good deal determined by the altitude. At higher elevations, certain genera of plants grow unusually large. Most surprising are the giant heathers, senecios and lobelias, to which the Swedish botanist Olov Hedberg from the Uppsala University referred to as “botanical big game”. As the altitude increases, temperatures drop. The air also grows thinner, provoking intense radiation, even on clouded days. During the day the incoming radiation of ultraviolet and infrared light is fierce, while at night the outward radiation under a clear sky has a considerable cooling effect. The equatorial location dictates marked diurnal variations in temperature, whereas the seasonal differences are less important. As if it were summer every day, winter every night.

There is no water shortage in the Rwenzori. Yet several members of the afroalpine family bear resemblance with species that normally thrive in desert climates. The reason lies in their similar water economy. Although abundantly present, water is not always readily available to the afroalpine plants when they need it. The nightly frosts affect the sap transport in the plants, and the intake of water by its roots. As the day begins, the air temperature and radiation level rise rapidly, putting strenuous demands on the exposed parts of the plants. It is vital to meet the transpiration demands of the leaves, and maintain a proper water balance. To counter the effects of freezing, the afroalpine plants have developed the insulation systems which give them such a striking appearance. As a rule, these adaptive trends become more prominent as the altitude rises.[5]

Vegetation zones
There are 5 different vegetation zones found in the Rwenzori Mountains. These are grassland (1000–2000m), montane forest (2000–3000m), bamboo/mimulopsis zone (2500–3500m), heather/Rapanea zone (3000–4000m) and the afro-alpine moorland zone (4000–4500m). At higher altitudes some plants reach an unusually large size, such as lobelia and groundsels. The vegetation in the Rwenzori Mountains is unique to equatorial alpine Africa.[6] 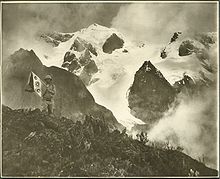 A subject of concern in recent years has been the impact of climate change on Rwenzori's glaciers. In 1906 the Rwenzori had 43 named glaciers distributed over 6 mountains with a total area of 7.5 km²., about half the total glacier area in Africa. By 2005, less than half of these survive, on only 3 mountains, with an area of about 1.5 km². Recent scientific studies such as those by Dr Richard Taylor of University College London have attributed this to global climate change, and investigated its impact on the mountain's vegetation and biodiversity.[9][10]