The Dutch Water Line[1][2](Dutch: Hollandsche Waterlinie) was a series of water based defences conceived by Maurice of Nassau in the early 17th century, and realised by his half brother Frederick Henry. Combined with natural bodies of water, it could be used to transform the economic heartland of the Dutch Republic almost into an island.

Early in the Eighty Years' War of Independence against Spain the Dutch had realized that flooding low lying areas formed an excellent defence against enemy troops, as was demonstrated, for example, during the siege of Leiden, 1574. In the latter half of the war when the economic heartland of the Dutch Republic (i.e. the province of Holland) had been freed of Spanish troops. Maurice of Orange Nassau planned to protect it with a line of flooded land protected by fortresses that ran from the Zuiderzee (present IJsselmeer) down to the river Waal. 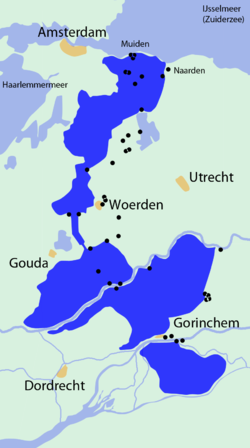 Map of the Old Waterline

In 1629 prince Frederick Henry started the execution of the plan. Sluices were constructed in dikes and forts and fortified towns were created at strategic points along the line with guns covering especially the dikes that traversed the water line. The water level in the flooded areas was carefully maintained to a level deep enough to make an advance on foot precarious and shallow enough to rule out effective use of boats (other than the flat bottomed gun barges used by the Dutch defenders). Under the water level additional obstacles like ditches, trous de loup and later barbed wire and mines were hidden. The trees lining the dikes that formed the only roads through the line, could be turned into abatis in time of war. In wintertime the water level could be manipulated to weaken ice covering, while the ice itself could be used when broken up, to form further obstacles that would expose advancing troops longer to fire from the defenders. 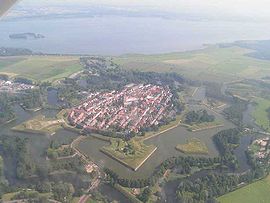 Aerial view of the fortified town of Naarden; with a good view of the star-shaped layout of the earth bastions, designed in the early gunpowder age to place outward guns to force an enemy to keep distance and thus to protect the town proper against shelling

The Dutch Water Line proved its value less than forty years after its construction during the Franco-Dutch War (or Third Anglo-Dutch War) (1672) when it stopped the armies of Louis XIV from conquering the Dutch Republic. And in 1794-1795 the revolutionary French armies only overcame the obstacle posed by the Dutch Water Line due to the heavy frost that had frozen solid the flooded areas.

Map of the New Waterline

After the final defeat of Napoleon in 1815 at the Battle of Waterloo, the United Kingdom of the Netherlands was formed. Soon after king William I decided to modernise the waterline. The Water Line was partly shifted east of Utrecht.

In the next 100 years the main Dutch defence line would be the new water line which was further extended and modernised in the 19th century with forts containing round gun towers reminiscent of Martello towers. The line was mobilised but never attacked during the Franco-Prussian war in 1870 and World War I.

At the advent of the Second World War most of the earth and brick fortifications in the Water Line were too vulnerable to modern artillery and bombs to withstand a protracted siege. To remedy this a large number of pillboxes were added. However, the Dutch had decided to use a more eastern main defence line, the Grebbe line, and reserved a secondary role for the Water line. When the Grebbe line was broken on May 13, the field army was withdrawn to the Water Line. However, modern warfare could circumvent fixed defense lines (cf. the French Maginot line). While the Dutch army was fighting a fixed battle at the Grebbe line, German airborne troops had captured the southern approaches into the heart of "Fortress Holland" by surprise — the key points being the bridges at Moerdijk, Dordrecht and Rotterdam. When resistance did not cease, the Germans forced the Dutch into surrender by aerial bombing of Rotterdam, and threatening the same for Utrecht and Amsterdam. Therefore, during the Battle of the Netherlands in May 1940 there was no fighting at the line itself.

After the Second World War, the Dutch government redesigned the idea of a waterline to counter a possible Soviet invasion. This third version of the waterline was erected more to the east, at the IJssel in Gelderland. In case of an invasion, the water of the Rhine and the Waal were set to divert into the IJssel, flooding the river and bordering lands. The plan was never tested, and dismantled by the Dutch government in 1963. 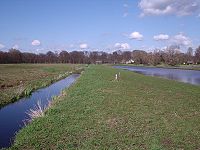 Today many of the forts are still more or less intact. There is renewed interest in the waterline for its natural beauty. Bike tours and hiking paths are organised with the line as theme. Some of the forts are open for bikers/hikers to stay the night. Others have a variety of uses, for example Utrecht University houses its botanical garden in Fort Hoofddijk.

Due to the unique nature of the line, the Dutch government is considering whether to nominate the whole defensive line as a UNESCO world heritage site, as they did with the ring of fortresses around Amsterdam.

A twenty-five year plan has been developed by the artist, Agnes Denes.

In 2010, one of the forts on the Line, Bunker 599,[3] was opened as a publicly-accessible work of art. The bunker was sliced open, with a walkway placed through it forming an installation allowing a view to look into and through the bunker.

Forts and fortified towns on the New Waterline

To protect weaknesses in the waterline a series of forts and fortified towns have been constructed.

Order of forts following the line from north to south.