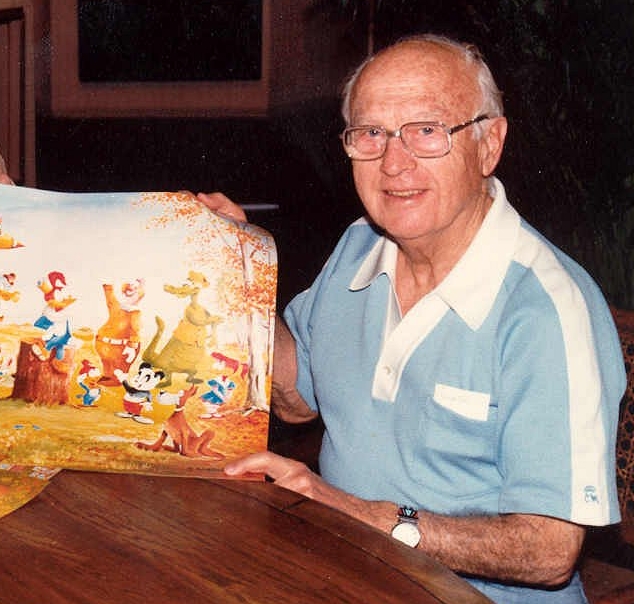 Walter Benjamin Lantz ( [ [http://www.seeing-stars.com/ImagePages/WalterLantzGravePhoto.shtml Photo of grave marker] ] &ndash; ) was an American and , best known for founding and creating .

Early years and start in animation

Walter Lantz was born on (some sources incorrectly list his birth year as 1900) in into a family of Italian , his parents being Francesco Paolo Lantz (formerly Lanza) and Maria Gervasi (later Jarvis), the latter coming from , Italy. According to Joe Adamson in his book "The Walter Lantz Story", his father was given the Lantz name by an immigration official upon his arrival in the United States. Lantz was interested in art at an early age, completing a mail order drawing class at age twelve. He got his first taste of animation when he watched ’s cartoon short, "". This, perhaps, inspired him to become a cartoonist himself later on. While working as an auto mechanic, Lantz got his first break in the art world. A well-to-do customer, Fred Kafka, liked his drawings on the garage's bulletin board. He bankrolled his studies at New York City's Art Students League. Kafka also helped him get a job in town, as a copy boy at the "", owned by . When he had completed his day's work at the newspaper office, he attended art school.

By the time he was sixteen, Lantz was working behind the camera in the animation department under the supervision of director . Lantz then began work at the John R. Bray Studios in on the "Jerry On The Job" series. In 1924, Lantz began to rise to prominence at the studio and directed, animated, and even starred in his first cartoon series, Dinky Doodle. By 1927 he moved to where he worked briefly for director and then was a gag writer for comedies.

In 1928, Lantz was hired by Charles B. Mintz as a director on the "" cartoon series for Universal. Earlier that year, Mintz and his brother-in-law George Winkler had succeeded in snatching Oswald from the character's original creator, . Universal president became dissatisfied with the Mintz-Winkler product and fired them, deciding instead to produce the Oswalds directly on the Universal lot. While schmoozing with Laemmle, Lantz wagered that if he could beat Laemmle in a game of poker, the character would be his. As fate would have it, Lantz won the bet, and Oswald was now his character.

As Lantz began assembling a new studio, he decided to select a fellow New York animator, Bill Nolan, to help develop the series. Nolan's previous credentials included inventing the panorama background and developing a new, streamlined . Nolan was (and still is) probably best known for perfecting the "rubber hose" style of animation. In September 1929, Lantz finally put out his first cartoon, "".

By 1935, Nolan had parted company with Lantz. Lantz became an independent producer, supplying cartoons to Universal instead of merely overseeing the animation department. By 1940, he was negotiating ownership for the characters he had been working with.

When Oswald had worn out his welcome, Lantz decided that he needed a new character. Meany, Miny, and Moe, Baby-Face Mouse, Snuffy Skunk, Doxie (a comic dachshund), and Jock and Jill (monkeys that resembled ' ) were some of the personalities Lantz and his staff had come up with. However, one character, , stood out from the rest and soon became Lantz's headline star for the 1939-1940 production season.

In 1940 Lantz had married actress . During their honeymoon, the couple kept hearing a woodpecker incessantly pecking on their roof. Gracie suggested that Walter use the bird for inspiration and make him into a cartoon character. Taking her advice, though a bit skeptical about its success, Lantz debuted in an short, "Knock Knock". The brash woodpecker character was similar to the early , and Lantz liked the results enough to build a series around it.
supplied Woody's voice for his first three cartoons. When Blanc accepted a full-time contract with Leon Schlesinger Productions/ and left the Lantz studio, gagman , who was the main force responsible for "Knock Knock", became the bird's voice. Despite this, Blanc's distinctive laugh was still used throughout the cartoons. During 1948, the Lantz studio had a hit Academy Award-nominated tune in “The Woody Woodpecker Song”, featuring Blanc’s laugh. Mel Blanc sued Lantz for half a million dollars, claiming that Lantz had used his voice in various later cartoons without his permission. The judge, however, ruled against Blanc, saying that he had failed to copyright his voice or contributions. Even though Lantz had won the case, he paid Blanc the money in an out-of-court settlement when Blanc filed an appeal, and went off to search for a new voice for Woody Woodpecker.

In 1950, Lantz held anonymous auditions. Gracie, Lantz's wife, had offered to do Woody's voice; however, Lantz turned her down because Woody was a male character. Not discouraged in the least, Gracie went about secretly making her own anonymous audition tape, and submitted it with the others for the studio to listen to. Not knowing whose voice was being heard, Lantz picked Gracie’s voice to do Woody Woodpecker. Gracie supplied Woody’s voice until the end of production in 1972, and also appeared in other, non-Woody cartoons. At first Gracie voiced Woody without screen credit, because she thought that it would disappoint the children to know Woody Woodpecker was voiced by a woman. However, she soon came to enjoy being known as the voice of Woody Woodpecker, and allowed her name to be credited on the screen. Her version of Woody was cuter and friendlier than the manic Woody of the 1940s, and Lantz's artists redesigned the character to suit the new voice personality.

Lantz's harmonious relationship with Universal, the studio releasing his cartoons, was interrupted when new ownership transformed the company into Universal-International and did away with most of Universal's company policies. The new management insisted on getting licensing and merchandising rights to Lantz's characters. Lantz refused and withdrew from the parent company, releasing 12 cartoons independently through . Financial difficulties forced Lantz to shut down his studio in 1949. Universal-International re-released Lantz's UA cartoons during the shutdown and finally came to terms with Lantz, who resumed production in 1951. From this point forward Lantz worked quicker and cheaper, no longer using the lush, artistic backgrounds and stylings that distinguished his 1940s work. The generation came to know and love Lantz as the creator of the cartoons. He used his TV appearances to show how the animation was actually done. For many of those young viewers, it was the first time they had seen an explanation of the process. That same generation later knew him for entertaining the troops during the and visiting hospitalized . Walter Lantz was good friends with movie innovator . Because of this, Woody Woodpecker makes a cameo appearance in every feature film in which Pál was involved.Fact|date=February 2008

By the 1960s other movie studios had discontinued their animation departments, leaving Walter Lantz as one of the only two producers still making cartoons for theaters (the other was ). Lantz finally closed up shop in 1972, and Universal serviced the remaining demand with reissues of his older cartoons.

In his retirement, Lantz continued to manage his studio’s properties by licensing them to other media. He also continued to draw and paint, selling his paintings of rapidly. On top of that, he worked with and other youth groups around his area. In 1982, Lantz donated 17 artifacts to the Smithsonian Institution's National Museum of , among them a wooden model of Woody Woodpecker from the cartoon character’s debut in 1941.

In 1993, Lantz established a ten thousand dollar scholarship and prize for animators in his name at in Valencia. Walter Lantz died at St. Joseph Medical Center in of on , aged 94.

Some of the characters in the Lantz universe (both cartoons and comics) are Oswald the Lucky Rabbit, Space Mouse, , Homer Pigeon, , Andy Panda, Charlie Chicken and many more.

*1959 Lantz was honored by the City Council as "one of America's most outstanding animated film cartoonists".
*1973 the international animation society, ASIFA/, presented him with its .
*1979 he was given a special Academy Award, "for bringing joy and laughter to every part of the world through his unique animated motion pictures."
*1986 he received a star on the .