Charles Stansfeld Jones (1886–1950), aka Frater Achad, was an occultist and ceremonial magician. An early aspirant to A∴A∴ (the 20th to be admitted as a Probationer, in December 1909) who "claimed" the grade of Magister Templi as a Neophyte. He also became an O.T.O. initiate, serving as the principal organizer for that order in British Columbia, Canada. He worked under a variety of mottos and titles, including V.I.O. (Unus in Omnibus, "One in All," as an A∴A∴ Probationer), O.I.V.V.I.O., V.I.O.O.I.V., Parzival (as an Adeptus Minor and O.T.O. Ninth Degree), and Tantalus Leucocephalus (as Tenth Degree O.T.O.), but he is best known under his Neophyte motto Achad (Hebrew "unity", אחד), which he used as a byline in his various published writings.

Jones as the Magical Child of Aleister Crowley

Having been recruited through The Equinox in 1909, Jones was the twentieth person to join Aleister Crowley's A∴A∴ order. Jones' motto as a Probationer was Vnvs in Omnibvs (V.I.O.), and his supervising Neophyte was J. F. C. Fuller (Per Ardua). When Fuller later withdrew from the A∴A∴, Aleister Crowley took over as Jones' superior. Jones advanced to Neophyte, taking the motto Achad, which he was subsequently to use for most of his published writings, and by which he is best known. Jones continued his work under Crowley in the Outer Order of A∴A∴ until the former decided to "take 8=3, in case that is what the Master really needed," i.e. to claim the grade of Magister Templi in the Third Order, thus assisting Crowley's advancement to the further grade of Magus, by filling "the Master's" current position in the A∴A∴ hierarchy. (Note that—vows of obedience notwithstanding—service to a superior is not part of the A∴A∴ ethical system.) Jones took the Magister Templi obligation (i.e. "the Oath of the Abyss") and notified Crowley.

The news came as a profound revelation to Crowley. Nine months earlier he had been involved in a set of sex-magical operations with Sr. Hilarion (Jeanne Foster) in an apparently unsuccessful effort to conceive a child. Crowley noted the nine-month interval and concluded that Jones' "birth" as a Babe of the Abyss qualified him as the "magical child" of Crowley and Hilarion. He welcomed Jones to the Third Order, and declared him to be his "beloved son." Eventually, goaded by suggestions from Jones and impressed by his qabalistic insights into Thelema's founding volume, The Book of the Law, Crowley came to consider the younger man the "child" and the "one" prophesied in the book (in I:55-56 and similar passages).

Crowley and Jones frequently discussed the Ouija board and it is often mentioned in their unpublished letters.[citation needed]

Throughout 1917 Achad experimented with the board as a means of summoning Angels, as opposed to Elementals. In one letter Crowley told Jones:, "Your Ouija board experiment is rather fun. You see how very satisfactory it is, but I believe things improve greatly with practice. I think you should keep to one angel, and make the magical preparations more elaborate."

Over the years, both became so fascinated by the board that they discussed marketing their own design.

Charles Stansfeld Jones wrote a book called 'Crystal Vision through Crystal Gazing, in which he notes that in relationship to skrying (also spelled scrying) "the case of the Ouija Board applies equally to the Crystal." [1] 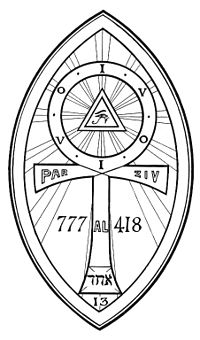 Inspired by the fifth point of the Task of a Zelator in the A∴A∴ system, Jones sought from Crowley the authority to begin O.T.O. initiatory work in Canada. The result was the first operation of the Mysteria Mystica Maxima degrees in North America, and the founding of British Columbia Lodge #1, where the original founders of Agape Lodge were first initiated.

Baphomet (Aleister Crowley) awarded Jones all O.T.O. degrees through the Seventh expedentiae causa in 1915. Jones was not given the IX° until he demonstrated a knowledge of the Supreme Secret of the Sovereign Sanctuary of the Gnosis in correspondence with Crowley. On his admission to the Ninth Degree, Jones took the magical name Parzival.

Jones became Grand Treasurer General after Crowley removed George Macnie Cowie from the post in 1918. Crowley and Jones soon came to disagreement about the management of Order funds, and Jones resigned from O.T.O. altogether in 1918. Crowley did not accept Jones' resignation, however, and Jones was eventually made Grand Master (X°) for North America by Theodor Reuss. Jones and the German initiate Heinrich Traenker were the Grand Masters who confirmed Crowley in his succession to the office of Outer Head of the O.T.O. in 1925.

Jones' organizing interests were never fired by O.T.O. after the early work of British Columbia Lodge. At Crowley's later request, Jones resigned from the office of National Grand Master General. Although Crowley formally expelled Jones from the Order in 1936, Jones nevertheless considered himself "Past Grand Master for the United States of America" until his death.

In 1921, Jones joined the Universal Brotherhood (U.B.), also known to its members as the Integral Fellowship or as the Mahacakra Society (or M.), depending on their level of participation. This group had been actively recruiting among Theosophists for a decade or more, and Jones was one of a number of prominent Thelemites who eventually joined.

The methods of the U.B. involved one-to-one correspondence, with an elaborate set of rules regarding strict secrecy of instructions, envelopes-within-envelopes, purple typewriter ribbons, and special paperclips. Aspirants were provided with typescript lectures ("sutras") on metaphysical topics, using idiosyncratic terms like "integrality" and "partitivity." A system of alms provided for funds to be remitted back up the same chain down which these instructions descended. Organizational titles and pseudonyms in the U.B. were generally taken from Sanskrit. Few U.B. writings have become accessible to non-members, but those that have, taken with Jones' writings in the U.B. vein, suggest that their doctrines involved a baroquely intellectualized form of sentimental monotheism.

In 1924, Jones was superintending about 70 members of U.B., and he formed a plan for subsuming Thelema into the U.B. as a Grama or "Integral Body," which would perpetuate some O.T.O. and A∴A∴ materials "in their pure form." He communicated this idea to Wilfred T. Smith, who was at that time his subordinate in both the U.B. and A∴A∴, but Smith's interest in the U.B. was slight and waning.

Annie Besant, as head of the Theosophical Society, strictly forbade cross-membership in the U.B. As Crowley became aware of the involvement of his followers, he likewise denounced the U.B., calling it a "swindle" in correspondence with Jones. Many of those who left the Theosophical Society for the U.B. under pressure from Besant later converted to Roman Catholicism.

In 1928, Jones himself became a Roman Catholic, undergoing baptism and confirmation into the laity of that church. At roughly the same time, he succeeded to the U.B. office of Mahaguru, thus becoming the chief of that organization. Jones continued to hold that office, apparently until his death. Jones was succeeded as Mahaguru by John P. Kowal (1900–1978).

The true aims of the U.B. remain obscure, but it has been accused by Wilfred T. Smith, among others, of acting as a front for Roman Catholic infiltration of occult groups; and by former member Paul Foster Case of being inspired by the Bavarian Illuminati. Mahaguru John P. Kowal told Martin Starr that its purpose was "to make men think."

Rumors of insanity and imprisonment

In late 1917 Jones was arrested in a Vancouver, Canada hotel, where he had been behaving erratically. He was imprisoned on suspicion of being a draft dodger who was pretending to be insane. He was released after three days.

Kenneth Grant, writing in The Magical Revival, claims that on Jones' return to Vancouver circa 1930, he was wearing only a raincoat, which he proceeded to throw off, and then circumambulated the center of the city as a magical operation of some sort, was arrested, and had a stay in a mental institution. This story, which Grant may have had directly from Crowley, is in all likelihood a confusion of the 1917 incident with the "insanity" of Jones' 1928 baptism and 1929 confirmation in the Roman Catholic Church.