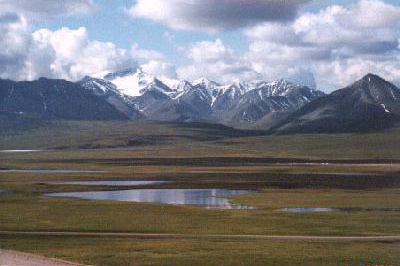 
map_caption=The Brooks Range is a that stretches from west to east across northern and into 's , a total distance of about 1100 km (700 mi). The mountains are not especially high, topping out at over 2,700 m (9,000 ft). This mountain range forms the northern-most drainage divide in North America, separating streams flowing into the Arctic Ocean and the North Pacific. The range roughly delineates the summer position of the Arctic front. It represents the northern extent of , with no trees (apart from some isolated stands) occurring north of the continental drainage divide. Mount Chamberlin, 9020 ft (2,749 m), is the highest peak in the range. Other notable peaks include , 8,975 ft (2,736 m) and Mount Michelson, 8,855 ft (2,699 m).

The range is mostly uninhabited, but the and the run through the (1,415 m, 4,643 ft) on their way to the North Slope and the s at . The villages of Anaktuvuk and Arctic Village, as well as the very small communities of Coldfoot, Wiseman, Bettles, and Chandalar Lake are the only settlements in the 700-mile Brooks Range. In the far west, near the Wulik River in the De Long Mountains is the , largest zinc mine in the world.

As one of the most remote and least-disturbed wildernesses of North America, the mountains are teeming with wildlife, including , s, and .