Marion Davies
For those of a similar name, see Marion Davis (disambiguation).

Davies was born Marion Cecilia Douras[1] on January 3, 1897 in Brooklyn, New York, the youngest of five children born to Bernard J. Douras (1857–1935), a lawyer and judge in New York City; and Rose Reilly (1867–1928).[2] Her father performed the civil marriage of Gloria Gould Bishop.[3] Her elder siblings included Rose, Reine, and Ethel. A brother, Charles, drowned at the age of 15 in 1906. His name was subsequently given to Marion's favorite nephew, the screenwriter Charles Lederer, the son of Marion's sister Reine Davies.[4]

The Douras family lived near Prospect Park in Brooklyn. The sisters changed their surname to Davies, which one of them spotted on a real estate agent's sign in the neighborhood. Even at a time when New York was the melting pot for new immigrants, having a British surname greatly helped one's prospects – the name Davies has Welsh origins. She was educated in a convent.

The sisters all hit the Great White Way, and Marion was signed on as a Ziegfeld girl in the Ziegfeld Follies of 1916.[5] 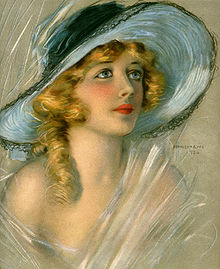 Portrait of Marion Davies for the June 1920 cover of Theatre Magazine.

After making her screen debut in late 1916 in a fashion newsreel, modeling gowns by Lady Duff-Gordon, she appeared in her first feature film in 1917's Runaway Romany.[6] It was a film written by Marion and directed by her brother-in-law, the prominent Broadway producer George W. Lederer. The following year she starred in three films, The Burden of Proof, Beatrice Fairfax, and Cecilia of the Pink Roses. Playing mainly light comedic roles, she quickly became a major film personality, making a small fortune which enabled her to provide financial assistance for her family and friends.[5]

Cecilia of the Pink Roses in 1918 was her first film backed by Hearst. She was on her way to being the most famously advertised actress in the world. During the next 10 years she appeared in 29 films, an average of almost three films a year.[7]

By the mid-1920s, however, her career was often overshadowed by her relationship with the married Hearst and their fabulous social life at San Simeon and Ocean House in Santa Monica; the latter dubbed by Colleen Moore "the biggest house on the beach – the beach between San Diego and Vancouver".

According to her own audio diaries, she had met Hearst long before she had started working in films.[8] Hearst, later formed Cosmopolitan Pictures which would produce several starring vehicles for her. Hearst's relentless efforts to promote her career instead had a detrimental effect, but he persisted, making Cosmopolitan's distribution deals first with Paramount, then Goldwyn, and then Metro Goldwyn Mayer. Davies herself was more inclined to develop her comic talents alongside her friends at United Artists, but Hearst pointedly discouraged this. Davies, in her published memoirs The Times We Had, concluded that Hearst's over-the-top promotion of her career, in fact, had a negative result. 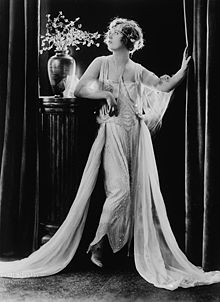 Hearst loved seeing her in expensive costume pictures, but she also appeared in contemporary comedies like Tillie the Toiler, The Fair Co-Ed (both 1927), and especially three directed by King Vidor, Not So Dumb (1930), The Patsy and the backstage-in-Hollywood saga Show People (both 1928). The Patsy contains her imitations, that she usually did for friends, of silent stars Lillian Gish, Mae Murray and Pola Negri. King Vidor saw Marion as a comedic actor instead of the dramatic actor Hearst wanted her to be. He noticed she was the life of parties and incorporated that into his films.

After seeing photographs of St Donat's Castle in Country Life magazine, the Welsh Vale of Glamorgan property was bought and revitalised by Hearst in 1925 as a gift to Davies.[9] Hearst and Davies spent much of their time entertaining, holding lavish parties with guests at their Beverly Hills estate. Frequent guests included, among others, Charlie Chaplin, Douglas Fairbanks, and a young John F. Kennedy. George Bernard Shaw, upon visiting San Simeon, was quoted as saying "this is what God would have built if he had had the money."

The coming of sound made Davies nervous because she had never completely overcome a childhood stutter.[7] Her career survived, however, and she made several comedies and musicals during the 1930s, including Marianne (1929), Not So Dumb (1930), The Florodora Girl (1930), The Bachelor Father (1931), Five and Ten (1931) with Leslie Howard, Polly of the Circus (1932) with Clark Gable, Blondie of the Follies (1932), Peg o' My Heart (1933), Going Hollywood (1933) with Bing Crosby, and Operator 13 (1934) with Gary Cooper. She was involved with many aspects of her films and was considered an astute businesswoman. Her career, however, was hampered by Hearst's insistence that she play distinguished, dramatic parts as opposed to the comic roles that were her forte.

Hearst reportedly had tried to push Irving Thalberg to cast Davies in the title role in Marie Antoinette, but Thalberg gave the part to his wife, Norma Shearer. This rejection came on the heels of Davies having been also denied the female lead in The Barretts of Wimpole Street; Norma Shearer got both roles. Despite Davies' friendship with the Thalbergs, Hearst reacted by pulling his newspaper support for MGM and moved Cosmopolitan Pictures to Warner Brothers. Davies' films there included Page Miss Glory (1935), Hearts Divided, Cain and Mabel (both 1936), and Ever Since Eve (1937), her last film.

Cosmopolitan Pictures folded so she left the film business and retreated to San Simeon. Davies would later state in her autobiography that after many years of work she had had enough and decided to devote herself to being Hearst's "companion." In truth, she was intensely ambitious, but realized that at the age of forty, and after twenty years of hard work, that she had not won over the public or the critics not under Hearst's control. Decades after Davies' retirement and death, however, the general consensus among critics is far more appreciative of her efforts, particularly in the field of comedy.

Hearst and Davies lived as a couple for decades but were never married, as Hearst's wife refused to give him a divorce. At one point, he reportedly came close to marrying Davies, but decided his wife's settlement demands were too high. Hearst was extremely jealous and possessive of her, even though he was married throughout their relationship. Davies was aboard the Hearst yacht when film producer Thomas Ince took ill, and died.

An "urban legend" having to do with a rumored relationship with Chaplin has endured since 1924. Chaplin (among other actresses and actors) and Davies were aboard the yacht the fateful night Thomas Ince died. Despite the lack of evidence to support a relationship, rumors have circulated since that Hearst mistook Ince for Chaplin and shot him in a jealous rage. The rumors were dramatised in the play The Cat's Meow, which was later made into Peter Bogdanovich's 2001 film of the same name starring Edward Herrmann as Hearst, Kirsten Dunst as Davies, Eddie Izzard as Chaplin, Joanna Lumley as Elinor Glyn, Jennifer Tilly as gossip columnist Louella Parsons, and Cary Elwes as Ince. Patty Hearst co-authored a novel with Cordelia Frances Biddle titled Murder at San Simeon (Scribner, 1996), based upon the death of Ince. The 1999 film RKO 281, a dramatization of the events during and after production of Orson Welles' Citizen Kane, depicts Welles being told by screenwriter Herman Mankiewicz that Hearst shot Ince, and references this several times as an analogy for Hearst's efforts to bury the film.

The factual record shows that Thomas Ince suffered an attack of acute indigestion while aboard the yacht and was escorted off the boat in San Diego by another of the guests, Dr. Daniel Carson Goodman, a Hollywood writer and producer. Ince was put on a train bound for Los Angeles, but was removed from the train at Del Mar when his condition worsened. He was given medical attention by Dr. T. A. Parker and a nurse, Jesse Howard. Ince told them that he had drunk liquor aboard Hearst's yacht. Ince was taken to his Hollywood home where he died the following day of a heart condition.[10]

By the late 1930s, Hearst was suffering financial reversals. After selling St Donat's Castle, Davies bailed him out by writing out a check for $1 million. Hearst died on August 14, 1951.

The California State Parks staff at Hearst Castle now report at the time of Hearst's death, 51% of his fortune had been willed to Davies.

Eleven weeks and one day after Hearst's death, Davies married Horace Brown on October 31, 1951, in Las Vegas.[5][11] It was not a happy marriage; Brown allegedly encouraged her drinking. Davies filed for divorce twice, but neither was finalized.[12][13]

In her last years, Davies was involved with charity work. In 1952, she donated $1.9 million to establish a children's clinic at UCLA, which was changed to The Mattel Children's Hospital in 1998. She also fought childhood diseases through the Marion Davies Foundation.[7] Part of the Medical Center at UCLA is named the Marion Davies Clinic.[14]

She suffered a minor stroke in 1956, and was later diagnosed with cancer of the jaw. She had an operation which appeared to be successful. Soon after the operation Davies fell and broke her leg. The last time Davies was seen by the American public was on January 10, 1960, on an NBC television special called Hedda Hopper's Hollywood. Joseph P. Kennedy rented Davies' mansion and worked from behind the scenes to secure his son John F. Kennedy's nomination during the 1960 Democratic National convention in Los Angeles.

Davies died of cancer on September 22, 1961 in Hollywood, California.[15] Her funeral at Immaculate Heart of Mary Church in Hollywood (donations to the church were from Hollywood celebrities such as Louis B. Mayer's estate (he died in 1957) and Bing Crosby) was attended by many Hollywood celebrities, including Mary Pickford and Mrs. Clark Gable (Kay Spreckels), as well as President Herbert Hoover. She is buried in the Hollywood Forever Cemetery and left an estate estimated at more than $30 million.

After the death of Davies' niece, Patricia Lake (née Van Cleeve), Lake's family announced that she was in fact the birth daughter of Marion Davies and William Randolph Hearst.[verification needed] Prior to the announcement, it had been said that Lake was the daughter of Rosemary Davies (Marion's sister) and her first husband, George Van Cleeve.

Davies was rumored to be the inspiration for the Susan Alexander character portrayed in Orson Welles' Citizen Kane (1941), which was based loosely on Hearst's life.[16] This led to various portrayals of Davies as a talentless opportunist.

Welles himself, as stated in his foreword to Davies autobiography The Times We Had, said he deeply regretted that so many assumed Susan Alexander was a carbon copy of Davies, and that the real Davies was a great actress and a wonderful woman. He also claimed that the Susan Alexander character owed as much to the Chicago tycoon Samuel Insull's wife, for whom he built an opera house.

Davies was portrayed by Virginia Madsen in the telefilm The Hearst and Davies Affair (1985) with Robert Mitchum as Hearst, and Heather McNair in Chaplin (1992). Madsen later became a Davies fan and said that she felt she had inadvertently portrayed her as a stereotype, rather than as a real person.

In RKO 281 (1999), an HBO movie about the making of Citizen Kane, she is played by Melanie Griffith, with James Cromwell as Hearst. She is portrayed as a lush who yearns to travel, but stays with Hearst because she loves him, and Hearst's desire to defend her honor is seen as the primary reason he attempts to have Citizen Kane banned.

In the Peter Bogdanovich film The Cat's Meow (see above), Kirsten Dunst played Davies as a witty, intelligent woman.