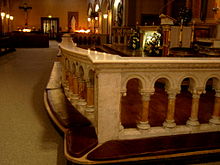 Altar rails are a set of railings, sometimes ornate and frequently of marble or wood, delimiting the chancel in a church,[1] the part of the sanctuary that contains the altar. A gate at the centre divides the line into two parts. The sanctuary is a figure of heaven, into which entry is not guaranteed. Rails are a feature of Roman Catholic, Anglican, Lutheran, and Methodist churches.

Barriers of various kinds often mark off as especially sacred the area of a church close to the altar, which is largely reserved for ordained clergy. In the Armenian rite curtains are drawn to cut off that area during the holiest moments of the liturgy. In other eastern rites, this evolved into a solid icon-clad screen, called the iconostasis, with three doorways, in each of which there are usually curtains that can be closed or drawn aside at various times. Western Europe had its more transparent Gothic rood screens and the smaller more economical altar rails.

Many Roman Catholic churches have had altar rails, those of the late nineteenth century being particularly decorative. Communicants receiving the Eucharist kneel at the railings to be given communion by a priest. After the Second Vatican Council, many parishes removed their altar rails, and a myth has arisen that the Council ordered the change (although the Council said nothing about it). Previously, only altar servers were allowed to join the clergy within the sanctuary during the celebration of the liturgy. Now, Lay Readers of Scripture and Extraordinary Ministers of Holy Communion enter the sanctuary during Mass.

Some Catholics and many architects and planners criticised some removals, often on liturgical, historical and æsthetic grounds. While in some states, the Roman Catholic Church has adopted a minimalist approach towards the removal of altar rails, in other countries, for example in Ireland, almost every re-ordering eliminated altar rails. Many Catholics resisted the changes: some have taken legal action to try to prevent the removal of altar rails and of other traditional features in pre-Vatican II sanctuaries. However, not all liberal Catholics supported the changes to sanctuaries; some have disputed the belief that the altar rails were a barrier, claiming that many churches were able to allow full participation by the laity in the new Order of the Mass without removing altar rails.

In the most recent liturgical legislation enacted by the Holy See, the Institutio Generalis Romani Missalis 2000, the traditional distinction between the chancel and the nave of the church is retained and may be delimited by a number of options, including an altar rail. The same legislation makes it clear that there is no requirement in liturgical law necessitating the removal of altar rails from historic churches and nothing prohibiting their erection in new ones. While a diocesan bishop is competent to decide on concrete questions concerning the removal of altar rails from a church in the diocese committed to his pastoral care, he is required prudently to make that decision in accordance with the norms of law, taking into account the wishes of the faithful. Any decision taken by the bishop, however, may be appealed by hierarchical recourse to the competent instance of the Holy See which, in this case, is the Congregation for Divine Worship and the Discipline of the Sacraments.

In other denominations, such as many of the churches of the Anglican Communion, the Lutheran Church, and the Methodist Church,[2] the use of altar rails has remained more common. There is typically no specific regulation concerning their presence or use, although they remain a common feature even in newly constructed churches. Their continued popularity results from a preference on the part of many to assume a posture of kneeling to receive the Eucharist. For those sanctuaries without an altar rail, in some cases a portable rail with attached kneeler is used for those who wish to kneel to receive the Eucharist.

In the Lutheran Church, an altar rail is the common place for a pastor to hear a confession,[3] which generally is required to receive the Eucharist for the first time.[4] A common Lutheran practice from the Scandinavian traditions is to have an altar rail in the shape of a half-circle, the other half of the circle being on the other side of the altar wall- outside, in the cemetery. The two halves symbolize the connection between the current congregation with those gone before.