Copper(II) acetate, also referred to as cupric acetate, is the chemical compound with the formula Cu(OAc)2 where OAc- is acetate (CH3CO2-). The hydrated derivative, which contains one molecule of water for each Cu atom, is available commercially. Anhydrous Cu(OAc)2 is a dark green crystalline solid, whereas Cu(OAc)2(H2O)2 is more bluish-green. Since ancient times, copper acetates of some form have been used as fungicides and green pigments. Today, copper acetates are used as reagents for the synthesis of various inorganic and organic compounds.[2] Copper acetate, like all copper compounds, emits a blue-green glow in a flame. 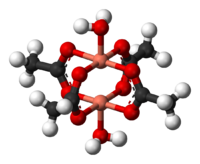 Copper acetate monohydrate is described by the formula Cu2(OAc)4(H2O). It adopts the "paddle-wheel" structure seen also for related Rh(II) and Cr(II) tetraacetates.[3][4] One oxygen atom on each acetate is bound to one copper at 1.97 Å (197 pm. Completing the coordination sphere are two water ligands, with Cu-O distances of 2.20 Å (220 pm). The two five-coordinate copper atoms are separated by only 2.65 Å (265 pm), which is close to the Cu--Cu separation in metallic copper.[5] The two copper centers interact resulting in a diminishing of the magnetic moment such that near 90 K, Cu2(OAc)4(H2O)2 is essentially diamagnetic due to cancellation of the two opposing spins. Cu2(OAc)4(H2O)2 was a critical step in the development of modern theories for antiferromagnetic coupling.[6]

Copper(II) acetate synthesized by the method described in the history section leads to impure samples. It is prepared industrially by heating copper(II) hydroxide or copper(II) carbonate with acetic acid.[2]

A second method of copper acetate production is to electrolyze a concentrated aqueous solution of calcium acetate with copper electrodes. As the reaction proceeds the anode oxidizes to produce copper acetate which adheres to the anode's surface and can be removed as crystals. At the cathode calcium ions are reduced to calcium metal and would be deposited, but due to the water content of the solution the calcium is converted to an insoluble calcium hydroxide layer. The drawback with this setup is that the cathode gets coated with insulative calcium hydroxide, which slows the process. To negate this hydroxide buildup mercury is frequently utilized as the cathode; therefore as the process takes place the calcium formed immediately reacts with the mercury to make a calcium-mercury amalgam and the copper acetate formed at the anode is removed periodically. This process generally yields suitably pure copper acetate with slight traces of calcium acetate.

Heating a mixture of anhydrous copper(II) acetate and copper metal affords cuprous acetate: The hydrate form can be dehydrated by heating at 100 °C in a vacuum:[7]

Unlike the copper(II) derivative, copper(I) acetate is colourless and diamagnetic.

Basic copper acetate is prepared by neutralizing an aqueous solution of copper(II) acetate. The basic acetate is poorly soluble. This material is a component of verdigris, the blue-green substance that forms on copper during long exposures to atmosphere.

The uses for copper(II) acetate are more plentiful as a catalyst or oxidizing agent in organic syntheses. For example, Cu2(OAc)4 is used to couple two terminal alkynes to make a 1,3-diyne:[8]

The reaction proceeds via the intermediacy of copper(I) acetylides, which are then oxidized by the copper(II) acetate, releasing the acetylide radical. A related reaction involving copper acetylides is the synthesis of ynamines, terminal alkynes with amine groups using Cu2(OAc)4.[citation needed]

Copper(II) acetate was historically prepared in vineyards, since acetic acid is a byproduct of fermentation. Copper sheets were alternately layered with fermented grape skins and dregs left over from wine production and exposed to air. This would leave a blue substance on the outside of the sheet. This was then scraped off and dissolved in water. The resulting solid was used as a pigment, or combined with arsenic trioxide to form copper acetoarsenite, a powerful insecticide and fungicide called Paris Green or Schweinfurt Green.