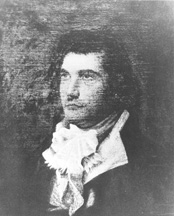 Abraham Bedford Venable (, &ndash; , ) was a representative and senator from . He was the uncle of congressman .

Born on "State Hill", a farm in what is now Worsham, Virginia, Venable attended and later graduated from the College of New Jersey in 1780. He worked as a planter and studied law in his hometown, eventually being admitted to the bar in 1784. He started practice at the Prince Edward Court House in . He later got involved in politics and was elected to the second congress, serving from 1791 to 1799. He served as chairman of the Committee on Elections in the fourth congress. He was later elected to the senate to fill a vacancy, serving from 1803 to 1804 when he resigned to become of in . He died in 1811 in a theater fire in . His ashes were placed under a rock at Monumental Church in Richmond with the ashes of other victims of the fire including Virginia Governor George William Smith.