The Canada Goose (Branta canadensis) is a wild goose belonging to the genus Branta, which is native to arctic and temperate regions of North America, having a black head and neck, white patches on the face, and a brownish-gray body.

The Canada Goose was one of the many species described by Carl Linnaeus in his 18th-century work Systema Naturae.[2] It belongs to the Branta genus of geese, which contains species with largely black plumage, distinguishing them from the grey species of the Anser genus. The specific epithet canadensis is a New Latin word meaning "from Canada". According to the Oxford English Dictionary, the first citation for the 'Canada Goose' dates back to 1772. The Cackling Goose was formerly considered to be a set of subspecies of the Canada Goose. The Canada Goose is also referred to as the Canadian Goose.[3]

The Cackling Goose was originally considered to be the same species or a subspecies of the Canada Goose, but in July 2004 the American Ornithologists' Union's Committee on Classification and Nomenclature split the two into two species, making Cackling Goose into a full species with the scientific name Branta hutchinsii. The British Ornithologists' Union followed suit in June 2005.[4]

The AOU has divided the many subspecies between the two animals. To the present species were assigned:

The distinctions between the two geese have led to confusion and debate among ornithologists. This has been aggravated by the overlap between the small types of Canada Goose and larger types of Cackling Goose. The old "Lesser Canada Goose" was believed to be a partly hybrid population, with the birds named taverneri considered a mixture of minima, occidentalis and parvipes. In addition, it has been determined that the Barnacle Goose is a derivative of the Cackling Goose lineage, whereas the Hawaiian Goose is an insular representative of the Canada Goose.

The black head and neck with white "chinstrap" distinguish the Canada Goose from all other goose species, with the exception of the Barnacle Goose, but the latter has a black breast, and also grey, rather than brownish, body plumage.[5] There are seven subspecies of this bird, of varying sizes and plumage details, but all are recognizable as Canada Geese. Some of the smaller races can be hard to distinguish from the newly-separated Cackling Goose.

This species is native to North America. It breeds in Canada and the northern United States in a variety of habitats. Its nest is usually located in an elevated area near water such as streams, lakes, ponds and sometimes on a beaver lodge. Its eggs are laid in a shallow depression lined with plant material and down. The Great Lakes region maintains a very large population of Canada Geese.

By the early 20th century, over-hunting and loss of habitat in the late 19th century and early 20th century had resulted in a serious decline in the numbers of this bird in its native range. The Giant Canada Goose subspecies was believed to be extinct in the 1950s until, in 1962, a small flock was discovered wintering in Rochester, Minnesota, by Harold Hanson of the Illinois Natural History Survey.[8] With improved game laws and habitat recreation and preservation programs, their populations have recovered in most of their range, although some local populations, especially of the subspecies occidentalis, may still be declining.

In recent years, Canada Geese populations in some areas have grown substantially, so much so that many consider them pests (for their droppings, the bacteria in their droppings, noise and confrontational behavior). This problem is partially due to the removal of natural predators and an abundance of safe, man-made bodies of water (such as on golf courses, public parks and beaches, and in planned communities).

Contrary to its normal migration routine, large flocks of Canada Geese have established permanent residence in the Chesapeake Bay and in Virginia's James River regions, and in the Triangle area of North Carolina (Raleigh, Durham, Chapel Hill), and nearby Hillsborough. Some Canada Geese have taken up permanent residence as far south as Florida, in places such as retention ponds in apartment complexes, etc. Some flocks in Canada may even choose not to migrate, even during the winter, if food (such as human leftovers) is constantly available throughout the season.

Canada Geese have reached northern Europe naturally, as has been proved by ringing recoveries. The birds are of at least the subspecies parvipes, and possibly others. Canada Geese are also found naturally on the Kamchatka Peninsula in eastern Siberia, eastern China, and throughout Japan.

Greater Canada Geese have also been introduced in Europe, and have established populations in Great Britain, the Netherlands, Belgium, Germany, and Scandinavia. Semi-tame feral birds are common in parks, and have become a pest in some areas. In the early 17th century, explorer Samuel de Champlain sent several pairs of geese to France as a present for King Louis XIII. The geese were first introduced in Britain in the late 17th century as an addition to King James II's waterfowl collection in St. James's Park.

Canada Geese were introduced as a game bird into New Zealand and have also become a problem in some areas, fouling pastures and damaging crops. They were protected under the Wildlife Act 1953 and the population was managed by Fish and Game New Zealand who culled excessive bird numbers. In 2011 the government removed the protection status allowing anyone to kill the birds.[9] It was feared that farmers would resort to poisoning the birds although this was denied by Federated Farmers.[10]

Like most geese, the Canada Goose is naturally migratory with the wintering range being most of the United States. The calls overhead from large groups of Canada Geese flying in V-shaped formation signal the transitions into spring and autumn. In some areas, migration routes have changed due to changes in habitat and food sources. In mild climates from California to the Great Lakes, some of the population has become non-migratory due to adequate winter food supply and a lack of former predators.[citation needed]

Canada Geese are primarily herbivores,[11] although they sometimes eat small insects and fish.[12] Their diet includes green vegetation and grains. The Canada Goose eats a variety of grasses when on land. It feeds by grasping a blade of grass with the bill, then tearing it with a jerk of the head. The Canada Goose also eats grains such as wheat, beans, rice, and corn when they are available. In the water, it feeds from silt at the bottom of the body of water. It also feeds on aquatic plants, such as seaweeds.[7] In urban cities, they are also known to pick food out of garbage bins.

During the second year of their lives, Canada Geese find a mate. They are monogamous, and most couples stay together all of their lives.[7] If one dies, the other may find a new mate. The female lays 3–8 eggs and both parents protect the nest while the eggs incubate, but the female spends more time at the nest than the male.[citation needed]

The incubation period, in which the female incubates while the male remains nearby, lasts for 24–28 days after laying. As the annual summer molt also takes place during the breeding season, the adults lose their flight feathers for 20–40 days, regaining flight at about the same time as their goslings start to fly.[15]

Adult geese are often seen leading their goslings in a line, usually with one parent at the front, and the other at the back. While protecting their goslings, parents often violently chase away nearby creatures, from small blackbirds to lone humans that approach, after warning them by giving off a hissing sound and will then attack with bites and slaps of the wings if the threat does not retreat or has seized a gosling. Most of the species that prey on eggs will also take a gosling. Although parents are hostile to unfamiliar geese, they may form groups of a number of goslings and a few adults, called crèches.[citation needed]

The offspring enter the fledging stage any time from 6 to 9 weeks of age. They do not leave their parents until after the spring migration, when they return to their birthplace. Once they reach adulthood, Canada Geese are rarely preyed on, but (beyond humans) can be taken by Coyotes, Red Foxes, Gray Wolves, Snowy Owls, Great Horned Owls, Golden Eagles and, most often, Bald Eagles.[14] 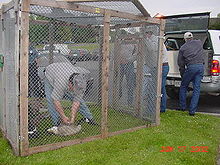 In North America, non-migratory Canada Goose populations have been on the rise. The species is frequently found on golf courses, parking lots and urban parks, which would have previously hosted only migratory geese on rare occasions. Owing to its adaptability to human-altered areas, it has become the most common waterfowl species in North America. In many areas, non-migratory Canada Geese are now regarded as pests by humans. They are suspected of being a cause of an increase in high fecal coliforms at beaches.[16] An extended hunting season, deploying noise makers, and hazing by dogs have been used in an attempt to disrupt suspect flocks.[17]

Since 1999, The United States Department of Agriculture Wildlife Services agency has been engaged in lethal culls of Canada Geese primarily in urban or densely populated areas. The agency responds to municipalities or private land owners, such as golf courses, who find the geese obtrusive or object to their waste.[18] Addling goose eggs and destroying nests are promoted as humane population control methods.[19]

In 1995, a US Air Force E-3 Sentry aircraft at Elmendorf AFB, Alaska struck a flock of Canada Geese on takeoff and crashed, killing all 24 crew. The accident sparked efforts to avoid such events, including habitat modification, aversion tactics, herding and relocation, and culling of flocks.[20] A collision with a flock of migratory Canada Geese resulted in US Airways Flight 1549 suffering a total power loss after takeoff from LaGuardia Airport, New York City, New York on 15 January 2009. The pilot brought the plane to an emergency 'splash'-landing in the Hudson River causing only minor injuries to the 155 passengers and crew.[21][22]

Geese have a tendency to attack humans when they feel themselves or their goslings to be threatened. First the geese will stand erect, spread their wings and produce a hissing sound. Next, the geese will charge. They may then bite or attack with their wings.[23]

Resting in a pond during spring migration, Ottawa, Ontario

Canada geese are known for their seasonal migrations. Most Canada Geese have staging or resting areas where they join up with others. Their autumn migration can be seen from September to the beginning of November. The early migrants have a tendency to spend less time at rest stops and go through the migration a lot faster. The later birds usually spend more time at rest stops. These geese are also renowned for their V-shaped flight formation. The front position is rotated since flying in front consumes the most energy. Canada Geese leave the winter grounds more quickly than the summer grounds. Elevated thyroid hormones, such as T3 and T4, have been measured in geese just after a big migration. This is believed because of the long days of flying in migration the thyroid gland sends out more T4 which will help the body cope with the longer journey. The increased T4 levels are also associated with increased muscle mass (hypertrophy) of the breast muscle, also because of the longer time spent flying. It is believed that the body sends out more T4 to help the goose's body with this long task by speeding up the metabolism and temperature at which the body works.[24] Also, other studies done show corticosterone levels to rise dramatically in these birds after and during a migration. Corticosterone is known a stress hormone, so it only makes sense that when these birds are stressed by flying long distances everyday, that more corticosterone is released into their system. It is believed that a higher level of corticosterone will help the birds better manage this task.[25]