Kittel joined the Luftwaffe in 1939, at the age of 22 and flew his first combat missions in 1941.[4] In spring 1941, he joined Jagdgeschwader 54 (JG 54) supporting Army Group North on the Eastern Front. Kittel claimed his first victory on 22 June 1941, the opening day of Operation Barbarossa. Kittel took time to amass his personal tally of aerial victories. By February 1943, he reached 39 kills, relatively insignificant when compared with some other German aces. In 1943, his tally began to increase when JG 54 began to operate the Fw 190. Kittel earned the Knight's Cross of the Iron Cross (Ritterkreuz des Eisernen Kreuzes) on 29 October 1943, for reaching 120 aerial victories. By the time he was officially awarded the decoration he had a tally of 123. A large number of his Soviet victims included the IL-2 Shturmovik aircraft, leading the German Army to call him the "Butcher Killer", a nickname they had given to the tough Shturmovik.[5]

During the remainder of World War II, Kittel was credited with 144 other aerial victories, which earned him the coveted Knight's Cross of the Iron Cross with Oak Leaves and Swords. On his 583rd combat mission, he was shot down and killed by the air gunner of a Shturmovik on 14 or 16 February 1945. Kittel was the most successful German fighter pilot to be killed in action.[6]

Otto Kittel was born on 21 February 1917 in Kronsdorf (Czech: Korunov[Notes 1]) near Krnov in Silesia, Austria-Hungary. His father's name was Eduard Kittel. Otto had a reserved personality, softly spoken, which did not fit the perceived public image of a fighter pilot.[7]

Fascinated with flight at an early age, he joined the Luftwaffe in 1939 at age 22. After completing his training on 12 February 1941, Kittel was posted to JG 54 based at Jever, Germany.[8] Kittel was assigned to 2 Staffel (Squadron) JG 54 at the rank of Unteroffizier. During his training he was considered a good comrade on account of his unshakeable calm, presence of mind and sense of duty. Owing to his attributes, his superior officers treated him with respect. During his training and early career Hannes Trautloft became a role model and offered Kittel advice about his techniques. He also formed a friendship with German ace Hans Philipp, who often shared advice about aerial combat. Philipp had served as a pastor when Kittel married his fiancé, Edith in June 1942 at Krasnogvardeysk. Edith had travelled into occupied Soviet territory near the front line to marry Kittel.[9] They had one son, Manfred Kittel, born in 1945.[10]

Kittel's first operations were air superiority missions during the Balkans Campaign. The German invasion of Yugoslavia and the bombing of Belgrade were supported by Kittel's Geschwader (Wing). Little air combat took place and Kittel's only combat actions were during strafing missions against Yugoslav Army forces. By the time of the Yugoslavian surrender, on 17 April 1941, JG 54 had claimed 376 aerial victories during the entire war. Kittel had yet to achieve a kill. During the course of the campaign Kittel acted as wingman for his staffel leader, who was the first to engage any enemy aircraft.[11] On 12 May 1941 JG 54 handed over its old Bf 109E fighters to Jagdgeschwader 77 (Fighter Wing 77), and Kittel began intensive training on the new Bf 109F.[12] 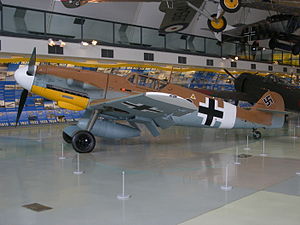 The German invasion of the Soviet Union, Operation Barbarossa, began on 22 June 1941. JG 54 was assigned bomber escort duties against Soviet airfields and the Baltic Fleet in the Baltic Sea ports. On this date he claimed a Yakovlev Yak-1 and a Soviet bomber. Despite his two victories, Kittel got off to a slow start in combat. On 30 June 1941 he downed his first Ilyushin Il-2 Shturmovik. His third victory earned him the Iron Cross Second Class. The German advance had now taken JG 54 to Staraya Russa, just south of Leningrad. JG 54 was to stay there for nearly two years.[13]

By winter 1941–1942, he had 11 victories and was awarded the Iron Cross First Class in October 1941.[14] In mid-March Kittel claimed two Shturmoviks for his 13–14 aerial victories. However, his Bf 109 suffered damage and Kittel returned to base, resisting the urge to chase more and risk his life. His motto was to get back in one piece and avoid risks: "Take the safe route and avoid ill-considered and wild offensive tactics".[15] In the end that alone produced success. Risking himself for a single victory was not Kittel's way. Within two months his tally had risen to 17. Sometime in May 1942 Kittel claimed a further two victories, one bomber and one fighter, in a single mission. During the combat he became involved in a dogfight with two experienced opponents. Using clever tactics, the Soviet fighters tried to force him into a trap; one chasing the other in an attempt to cut him off. Kittel's aircraft was fired on several times and hit. However, he managed to escape, in the process shooting down one of the enemy fighters.[16][17]

During the summer, 1942, aerial victories were hard to come by. Operating in the northern sector of the front usually meant little action as all the Soviet air activity was now combating German Army Group South's summer offensive, Case Blue. Every now and again an enemy aircraft would be sighted and shot down, but Kittel was frustrated. The ground crews kept up his spirits.[18] On 19 February 1943, Feldwebel Kittel achieved his 39th victory, which was also JG 54's 4,000th of the war. JG 54 Geschwaderkommodore (Wing Commander) Hannes Trautloft congratulated Kittel and said the following: "I have instructed that you're no longer to be assigned as wingman. Instead you're to be sent on freie Jagd [combat patrol] on your own whenever there's an opportunity."[19][20][21] In early 1943, JG 54 had been withdrawn from the frontline to convert to the Fw 190. With stronger undercarriage for the harsher conditions on the Eastern Front, greater firepower, speed and agility, the fighter was popular among pilots. Kittel, in particular, was pleased. The Fw 190 was an ideal interceptor against the tough and heavily armoured Shturmovik, his favourite target. At this point, Kittel's victory tally climbed rapidly.[22] By mid-March 1943, Kittel had reached 46 victories, encompassing all types of aircraft.[23]

On 14 or 15 March 1943 while on a mission over the Demyansk pocket, Kittel's Fw 190 suffered engine failure. He was 80 kilometres (50 mi) behind Soviet lines. He removed his precision board clock, an intricately engineered instrument (all pilots were ordered to do so) and landed his Fw 190 which slid 150 metres (490 ft) to a stop in a snow-covered field. His comrade, and a member of the flight, Herbert Broennle, advised him to hide after landing, to travel only by night and use a compass on a heading of 255 degrees (north-west) which would take him to Stayara Russa, towards JG 54's base behind German lines. Broennle himself had been shot down under the same circumstances in 1941, and had experience. Kittel ran for the nearest forest after landing. Several Russian women and children saw the crash from two houses nearby and came running out. No men were in sight. When Kittel got to the forest he found he had left his emergency rations behind, having only chocolate bar with him. He continued through the forest, able to move through the forest during the day unseen, resting often. Needing to eat, he raided several empty houses and found clothes but no food. Determined to find food, and now looking like a Russian peasant, he passed through several Soviet checkpoints looking for something to eat. Kittel spoke Czech and some Russian and managed to evade detection. On the route he stopped at several points and was given food. Eventually Kittel made it to the edge of Lake Ilmen. At night he crossed the frozen lake and made it to German lines. Kittel was 'recaptured' three days after crashing by a German sentry.[24]

Kittel took leave in March/April 1943. By the time he returned Walter Nowotny had taken over the Gruppe (Group). Hans Philipp had left to take command of Jagdgeschwader 1 (JG 1) in Germany. He would be killed on 8 October 1943. On 3 May 1943, Kittel resumed his combat career with three victories. However he was shot down and forced landed owing to return fire from a bombers' gunner.[25] On 10 June 1943 Kittel achieved another kill to reach 50.[26]

Kursk and back to the Baltic

JG 54 took part in many of the spring battles over the Crimea, Vyazma-Bryansk, Vitebsk, Kharkov, Orsha and Orel regions. As the spring battles ended, the Germans prepared for Operation Citadel, which would lead to the Battle of Kursk. During the air battles Kittel's unit escorted Junkers Ju 87 Stukas of III./Sturzkampfgeschwader 2 (Third Group, StG 2, or Dive Bomber Wing 2), which would achieve fame under the leadership of Hans-Ulrich Rudel.[27] On 5 July 1943, the Germans launched their attack. By this date, Otto Kittel had claimed 56 victories. During the first day of Citadel Kittel claimed six victories. The next day he shot down three more Soviet aircraft. It would be at this point Kittel would win recognition and become one of the most prominent aces. After the German defeat at Kursk Kittel continued participating in further battles as the German Army retreated to the Dnieper river. Kittel had achieved a one kill per day average to reach 94 victories on 4 September 1943.[28] Just 11 days later, on 15 September 1943, Kittel claimed his 100th aerial victory.[29] He received the Knight's Cross of the Iron Cross (Ritterkreuz des Eisernen Kreuzes) on 29 October 1943 for 120 victories. By the time he was awarded it on 29 October, he had added three more victories to reach 123.[30][31][32] 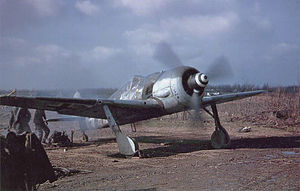 Between November 1943 through January 1944 Kittel was chief instructor of the Ergänzungs-Jagdgruppe Ost (Training Group East) in Biarritz, France, passing on knowledge and experience to the Jagdflieger (fighter pilots) of the future. Unhappy in a teaching role, Kittel filed several applications to return to combat, and in March 1944 Kittel returned to JG 54 on the Eastern Front.[34]

On 2 April 1944, having achieved 144 victories, Kittel claimed a further six for a total of 150. Kittel's 150th victory was claimed sometime between 4–8 April 1944. On April 14 he was awarded the Knight's Cross of the Iron Cross with Oak Leaves (Ritterkreuz des Eisernen Kreuzes mit Eichenlaub) for his 152nd aerial victory, claimed on 12 April. Kittel received the Oak Leaves from Adolf Hitler at the Wolf's Lair in East Prussia on 5 May 1944, becoming the 449th German so recognised. Kittel continued to increase his tally, shooting down another 50 aircraft by 26 August 1944, bringing his overall total to 200.[35] At this time, Kittel was flying a Fw 190A-6, "Yellow 5".[36] By the 27 October 1944, Kittel had achieved 254 victories, a total of 102 in just six months. He earned the Knight's Cross of the Iron Cross with Oak Leaves and Swords (Ritterkreuz des Eisernen Kreuzes mit Eichenlaub und Schwertern) on 25 November 1944 for 264 victories, only the 113th German serviceman to receive the award.[37][38][39] Kittel flew to Hitler's Headquarters to receive the award and then continued to Germany to spend his leave there. When he returned in January 1945 he took over 2 ./JG 54, or 2 Staffel (No. 2 Squadron). Kittel added a further three victories during his time as the Staffel's leader.[40] By 13 February 1945, Kittel had a personal total of 266 aerial victories.[41]

At 12:06 on 14 or 16 February 1945[Notes 2], Otto Kittel took off with his Geschwader (Wing) flying Fw 190 A-8 "Black 1", Werknummer (Works or Factory number) 690 282, to engage a formation of 14 Shturmovik aircraft over the Courland Pocket. At 12:13 he made contact with the formation at low altitude, no more than 100–150 metres (328 to 492 feet). Kittel attacked, firing at and damaging several Shturmovik. Kittel damaged one aircraft and chased it. As he closed in for the kill, his Focke-Wulf was hit by return fire from a rear gunner, and descended towards the ground on fire. Kittel, probably incapacitated and unable to use his parachute, did not bail out and the Fw 190 crashed in flames.[42][43] The site of the crash is believed to have been six kilometres (3.7 miles) south-west of Džūkste in Latvia.[44] Witnesses from Kittel's formation reported that a Shturmovik had been shot down by Otto before he himself was killed during the air battle having scored his 267th and final victory.[45]