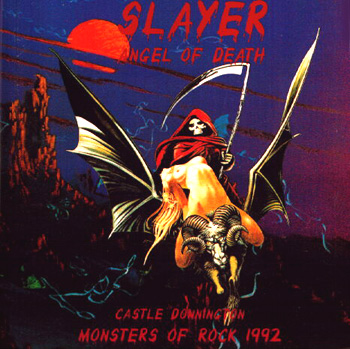 "Angel of Death" is the on the American band 's 1986 album "". The lyrics and music were written by Slayer guitarist and are based on Nazi physician , who conducted at the during . "Angel of Death" led to the band facing false accusations of Nazi sympathizing and throughout their career.

Despite the controversy surrounding the song and its contribution to the delay in the release of "Reign in Blood", "Angel of Death" is featured on all of Slayer's s and s and has appeared in several movies. The song was well received by critics; Steve Huey of described it as a "classic."

Slayer guitarist wrote "Angel of Death" after reading books about Nazi physician while on tour with the band: "I remember stopping someplace where I bought two books on Mengele. I thought, 'This has gotta be some sick shit.' So when it came time to do the record, that stuff was still in my head&mdash;that’s where the lyrics to “Angel of Death” came from."

The lyrical content of "Angel of Death" contributed to the delay of the release of Slayer's 1986 album "". The band were signed to whose distributor, , refused to release the album due to lyrical themes and artwork concerns, deeming the artwork "too graphic". "Reign in Blood" was eventually distributed by on October 7, 1986. However, due to the controversy, "Reign in Blood" did not appear on Geffen Records official release schedule.

"Angel of Death" caused outrage among survivors of the , as well as their families and the general public. The controversy lead to accusations of Nazi sympathizing which have followed Slayer throughout their career.

The song drew accusations of , although the band denied these claims. In addition, the band's producer and close friend has ish ancestry, their vocalist is , their drummer is , and King had a guest appearance on the Jewish group ' song "". The band members are often asked about the accusations in interviews, and have stated numerous times that they do not condone racism and are merely interested in the subject.

"Angel of Death" is the longest track on the album "Reign in Blood", spanning 4:51 minutes, where the total duration of the album is 28 minutes. Additionally, it has the one of the most conventional song structures on the album, featuring prominent s and choruses, where most tracks on the album eschew them. Hanneman and King deliver their 'intricate riffs', which offer the few hints of on the album according to Pop Matters reviewer Adrien Begrand, and Araya bursts out his piercing scream,

When drummer Lombardo left the band in 1992, due to conflicts with band members and his desire to bring his wife on tour,

Although "Angel of Death" did not enter any charts, it received strong praise from critics in reviews for "Reign in Blood". Clay Jarvas of noted that the song "smokes the asses of any band playing fast and/or heavy today. Lyrically outlining the horrors to come, while musically laying the groundwork for the rest of the record: fast, lean and filthy."

Adrien Begrand of "" remarked that "There's no better song to kick things off than the masterful "Angel of Death", one of the most monumental songs in metal history, where guitarists Kerry King and Jeff Hanneman deliver their intricate riffs, drummer Dave Lombardo performs some of the most powerful drumming ever recorded, and bassist/vocalist Tom Araya screams and snarls his tale of Nazi war criminal Joseph Mengele."

Capitalizing on the publicity generated by the controversy, the band utilized Nazi imagery by adapting a logo to one similar to the , during the "" period. Hanneman placed stickers on his guitar, and wrote "" a song about , the second in command in the organization.

"Angel of Death" has appeared in several movies, including ""; in a scene when the gremlin Mohawk is turning into a spider.

A Slayer called Dead Skin Mask released an album with eight Slayer tracks, "Angel of Death" being one of them.