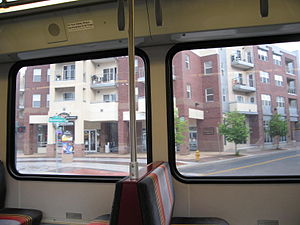 On the D Line

Gillig and Orion buses make up most of the fleet. MCI and Neoplan vehicles are used as express buses and regional buses. As of January 2010, the RTD light rail fleet has 125 light rail vehicles, serving 35 miles (56 km) of track. 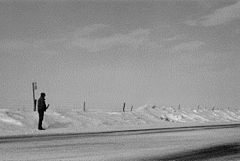 This project added HOV lanes to I-25 north of downtown Denver. It also added several dedicated slip ramps for RTD buses to access several Park-n-Ride stations directly from the highway. At the south end of the HOV lanes, buses had direct routes into Union Station or Market Street Station. The HOV lanes extended from I-25 to US-36, allowing regional and express routes running along US 36 to downtown Denver to bypass congestion around the Turnpike Tangle. This project was completed in September 1994.

In 2006, the Downtown Express was renovated to include a toll lane, thereby converting the HOV lanes into HOT lanes. This allows SOV vehicles to pay a toll to use them. It was built to increase the overall usage and efficiency of the highway's HOV lanes. The project was completed on June 2, 2006. 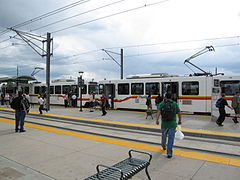 The Central Corridor, a 5.3 mile (8.5 km) light rail line, opened in October 1994. It was built along Welton Street, through the Five Points district along Stout Street and California Street, and following a railroad right-of-way from Colfax Avenue down to the intersection of I-25 and Broadway. This line was built without the aid of tax increases or federal funds; however, extensions have been funded by the Federal Transit Administration and new tax measures. This line was built from 30th/Downing as the northern terminus to I-25/Broadway as the southern terminus.

After the success of the Central Corridor, the Southwest Corridor light rail route opened in July 2000. An 8.7 mile (13.9 km) light rail line, the route runs from the terminus of the Central Corridor at I-25 & Broadway to Mineral Avenue in Littleton with 5 existing stations. The line has been popular, and the park-n-Ride lots at its stations often experience parking shortages. This project built a light rail line from I-25/Broadway south to Littleton/Mineral along an existing railroad right-of-way next to Santa Fe Drive. 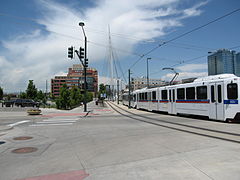 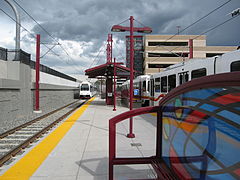 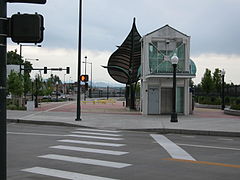 In November 1999, Denver area voters approved a project, known as the T-REX, which involved reconstruction of I-25 between Broadway and Lincoln Avenue in Lone Tree, and I-225 between I-25 and Parker Road in Aurora, with widening of the road to 5 lanes and light rail being built. The highway project was completed on August 22, 2006. The light rail line known as the Southeast Corridor opened shortly after 11 a.m. on November 17, 2006. The line covers 19.1 miles (30.6 km) and includes thirteen new stations, with parking available at all but the Louisiana/Pearl station.

FasTracks: A major project to dramatically expand the metro area's rail service. The less densely populated north metro area will receive two commuter rail lines, while the west metro will receive a light rail line and a commuter rail line. In addition, a commuter rail line will connect Denver International Airport to downtown. Union Station will be redeveloped into the hub of the rail network, with a large mixed-use transit-oriented development built around it. Several existing lines will be extended. This project is scheduled to be completed in 2014[6].