Michael Richards (born February 11, 1985) is a Canadian professional ice hockey centre for the Los Angeles Kings of the National Hockey League (NHL). He previously played for and was captain of the Philadelphia Flyers.

Richards grew up playing minor league hockey in his hometown of Kenora, Ontario. He played level A rep hockey for the Kenora Thistles until being drafted fourth overall in the 2001 OHL Priority Selection by the Kitchener Rangers. Richards was not a noted prospect prior to the selection.[1] After receiving a tip from a friend in Kenora, Rangers general manager Jamie MacDonald traveled to see Richards play on two occasions.[1]

Richards began his major junior career with the Kitchener Rangers of the Ontario Hockey League (OHL) in 2001–02. He was a member of a dominant 2003 Kitchener team that captured the Memorial Cup and led the team in scoring during the regular season with 87 points.[2] Following the Canadian Hockey League (CHL) championship victory, Richards was chosen as team captain.[1] That summer, the Philadelphia Flyers selected him 24th overall in the 2003 NHL Entry Draft with the second of the team's first round picks that season.

Upon being drafted, Richards returned to the Rangers for two more seasons. In his last season of junior, 2004–05, he embarked on another Memorial Cup run with Kitchener, but despite a remarkable 28-point performance from Richards in just 15 playoff games, the Rangers were eliminated by the London Knights in the OHL semi-finals. As soon as Kitchener was eliminated, the Flyers assigned Richards to the Philadelphia Phantoms, their American Hockey League (AHL) affiliate, for their playoff run. Averaging over a point per game, he became a key part of the Phantoms' 2005 Calder Cup championship.

Richards made his NHL debut with the Flyers the following season and scored a goal in his first game on October 5, 2005, against the New York Rangers.[3] Later in the season, he scored his first career NHL hat trick, which included two shorthanded goals, against the New York Islanders on February 8, 2006.[4] His hat trick was the first by a Flyers rookie since Mikael Renberg on February 15, 1994.[citation needed] Richards finished his NHL rookie season with 34 points in 79 games, third among Flyers rookies to Jeff Carter (drafted the same year as Richards, 11th overall) and R.J. Umberger.[5] 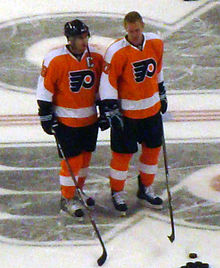 Richards (left) and Jeff Carter prior to a Flyers game

Following an injury shortened sophomore season – Richards was kept to 32 points in 59 games due to stomach surgery[6] – Richards emerged as a star with the Flyers in 2007–08 and topped the team in scoring with 75 points. Recognizing his ascent as a leader on the team, Richards was named one of the Flyers' alternate captains at the outset of the season[7] and was signed to a lengthy 12-year contract extension worth $69 million on December 13, 2007.[8] Shortly after signing the deal, Richards was selected to represent the Eastern Conference at the 2008 NHL All-Star Game in Atlanta.[9] In the first NHL All-Star Game of his career, Richards registered an assist.

As the Flyers entered the 2008 Stanley Cup Playoffs against the third-seeded Washington Capitals, Richards scored his first playoff goal on a penalty shot against Washington goaltender Cristobal Huet in game three.[10] In doing so, he became just the second player in NHL history to score his first playoff goal on a penalty shot (the first was Wayne Connolly who did so with the Minnesota North Stars in 1968).[11] The Flyers defeated the Capitals in seven games and then upset the Montreal Canadiens before falling to the Pittsburgh Penguins in the Eastern Conference Finals. Richards finished his 2008 playoff run with 14 points in 17 games.

Before the start of the 2008–09 season, on September 17, 2008, Richards was named the 17th captain in Flyers history, succeeding previous captain Jason Smith, who had signed with the Ottawa Senators in the off-season.[12] On February 15, 2009, Richards became the first player in NHL history to score three career 3-on-5 shorthanded goals when he beat New York Rangers goalie Henrik Lundqvist in a 5–2 win.[13] Six days later, on February 21, Richards became the first Flyer in team history[citation needed] to score a shorthanded goal in three consecutive games and the first NHL player to do so since Joe Sakic in 1998.[14] He finished the season second in team scoring to Jeff Carter with 80 points to go with a league-leading 7 shorthanded goals.[14]

Facing the Pittsburgh Penguins for the second consecutive year in the 2009 playoffs, Richards added 5 points in 6 games, but could not help the Flyers from being eliminated. After Richards' season ended, he was announced as a finalist for the Selke Trophy, along with Pavel Datsyuk of the Detroit Red Wings and Ryan Kesler of the Vancouver Canucks.[14] The next day, on April 29, 2009, it was revealed that Richards required surgery on both shoulders. He had reportedly felt discomfort since training camp and was on anti-inflammatory medication throughout the season. Richards narrowly missed out on the Selke, which could have been Philadelphia's first individual player trophy since Eric Lindros won the Hart in 1995. Datsyuk won the vote 945-942 in the closest Selke Trophy race since its inception.

The 2009-10 season started successfully for Richards, scoring five goals in his first three games including his second career hat trick in the second period of the Flyers' home opener against the Washington Capitals on October 6, 2009.[15] Against the Florida Panthers on October 24, Richards delivered a shoulder hit to David Booth's head. Knocked unconscious, Booth fell awkwardly on his head and neck and had to be carried of the ice on a stretcher. Richards was given a game misconduct, but was not suspended by the NHL.[16][17]

From the outset of the season, Richards was involved in an ongoing feud with the Philadelphia media. He issued a verbal boycott against the media in October 2009 after he was asked if the trade of forward Joffrey Lupul to the Anaheim Ducks was the result of a partying lifestyle that many players on the team were accused of sharing.[18] Accusations of team players drinking and partying excessively continued throughout the season, specifically with Richards and Carter.[18] As the team began to lose, Richards criticized the local media in an interview with The Hockey News for "throwing the team under the bus."[18] He also told the Philadelphia Daily News that the drinking accusations were fabricated.[18] Following a loss to the Washington Capitals on January 17, 2010, Richards reportedly got into a verbal exchange with reporters outside the Flyers' locker room, telling them he was unhappy with how the team was being covered in the media.[18] On February 1, 2010, Richards scored his 100th career NHL goal.[19] The Flyers barely scraped into the playoffs, winning in a shootout in their last game of the season to secure their place. However, they then embarked on a remarkable run to the 2010 Stanley Cup Finals, a run in which Richards cemented his captaincy and scored some important goals leading to renewed comparisons to Bobby Clarke, which eventually ended in the Stanley Cup Finals when the Flyers lost 4-3 in OT of game 6 to the Chicago Blackhawks.

Richards scored 23 goals to go along with 43 assists during the 2010-11 NHL season as the Flyers earned the 2nd seed in the Eastern Conference, and played the Buffalo Sabres in the first round of the 2011 Stanley Cup Playoffs. After eliminating the Sabres in 7 games, Richards and the Flyers were eliminated by the Boston Bruins in a 4 game sweep. Richards recorded one goal and six assists during the playoffs.

Richards and Flyers prospect Rob Bordson were traded to the Los Angeles Kings on June 23, 2011. In return, the Flyers received Wayne Simmonds, Brayden Schenn, and Los Angeles' 2012 second round pick.[20][21] Richards reacted to the major deal by saying, "“I was very shocked. At first I was shocked and then excited – I’m excited to move out to L.A. and be a part of a team that has a ton of great players. I’m just looking forward to helping them out.”[22] A Dan Gross article suggested that Richards' "hard-partying ways" influenced the Flyers' decision to trade Richards. However, Flyers' General manager Paul Holmgren stated that it was "preposterous" that partying had anything to do with the trade.[23]

Richards made his international debut with Team Canada at the 2004 World Junior Championships in Finland. Despite a third period lead in the gold medal game, Canada lost to the United States 4-3.

The following year, Richards returned to the World Juniors as team captain and led Canada to its first gold medal at the tournament since 1997. Richards tallied 5 points in 6 games.

After Richards' rookie season with the Philadelphia Flyers, he was chosen to his first senior tournament with Team Canada at the 2006 World Championships. Richards scored 5 points in 9 games, but Canada was defeated by Finland in the bronze medal game, failing to medal.

On December 30, 2009, Richards was selected to play for Team Canada at the 2010 Winter Olympics in Vancouver. [24] Richards helped lead Team Canada to an 8-0 victory over Norway in the first game of the 2010 Olympic tournament by scoring one goal on February 17, 2010.[25] He would go on to score a total of 2 goals and 3 assists in 7 games with a +5 rating.[26] This includes an important assist on the first goal by the Canadians in the Gold Medal game where he forced a turnover, fired a shot and the rebound was put into the net by Jonathan Toews. The Canadians would win that game 3-2 in overtime giving Richards an Olympic gold medal.[27]

Mike Richards is considered to be one of the top two-way centers in the league today. Because of his shot and vision, Richards is able to quarterback the power play, being a threat to the opposition due to his ability to shoot and pass. Richards is also a terrific penalty killer because of his willingness to block shots, his vision to read the play and position himself appropriately, and his ability to win key faceoffs in the defensive zone. Along with his defensive ability on the penalty kill, he is also an offensive threat, having 23 shorthanded goals over 6 seasons. He also currently holds the NHL record for most 5-on-3 shorthanded goals.

Richards is also unique because of his ability to play a Power forward style of game, which is usually reserved for players with a much bigger physical stature.

Richards was born in Kenora, Ontario to Norm and Irene.[1] He has two brothers, Mark and Matt.[1] His cousin, Jeff Richards,[1] is also an OHL graduate who plays in Germany.[28] He recently appeared on Making the Cut, a Canadian reality show about aspiring hockey players.

Growing up, he attended Beaver Brae Secondary School in Kenora,[29] until being drafted to the Kitchener Rangers at which point he attended Eastwood Collegiate Institute.[1] He also played soccer in high school with Beaver Brae.[citation needed]