On April 1, 1968, at Marble Mountain Air Facility, Republic of Vietnam, Marine Light Helicopter Squadron 167 was commissioned. From commissioning date until June 1971, HML-167 would participate in operations against communist forces in the Republic of Vietnam. Flying UH-1E’s for the duration of its tenure in Vietnam. On June 21, 1969, HML-167 dropped the first helicopter bomb. This was accomplished using the Helicopter Trap Weapon (HTW). 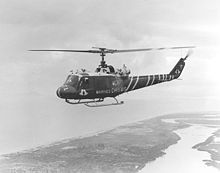 In April 1972, HML-167 received the Marine Corps’ first UH-1N. HML-167 acquired the additional responsibilities as training squadron and model manager for the UH-1N. On May 16, 1972, HML-167 was transferred to Marine Aircraft Group 29. The squadron performed the first coast to coast UH-1N flight in 1973.

HML-167 received its first AH-1T Cobras on January 17, 1984, and became HMLA-167 on April 1, 1986. It was the first unit to be officially designated as a Light/Attack Squadron with a permanent composite mix of UH-1N and AH-1T Helicopters.

Throughout 1986 and 1987, HMLA-167 demonstrated its flexibility. HML/A-167’s main body deployed as the Aviation Combat Element (ACE) for contingency MAGTF 2-88 in the Persian Gulf participating in Operation Praying Mantis. MAGTF 2-88 conducted an assault on the Sassan Gas/Oil separation platform complex in response to the Iranian mine attack on the USS Samuel B. Roberts. HMLA-167 also escorted eleven "Earnest Will" oil tanker convoys as well as ten minesweeper transits during its deployment in the Persian Gulf . As 1989 came to a close, HML/A-167 took delivery of its first three AH-1W Super Cobras during a ceremony at the National Helicopter Association’s annual convention.

Beginning in June 1990, detachments from HMLA-167 supported 22nd Marine Expeditionary Unit during the largest Noncombatant Evacuation Operation (NEO) since the evacuation of Saigon with the evacuation of over 3,000 American citizens and foreign nationals from the embattled capital in Monrovia, Liberia.

In August, HMLA-167 was recalled for deployment in support of Operation Desert Shield. Six AH-1W’s and sixteen pilots were detached to MAG 29 and subsequently deployed to Saudi Arabia later that month and would remain in theater through the completion of Operation Desert Storm. Separate detachments from HML/A-167 would also participate in Operation Provide Comfort and Operation Encourage Hope in eastern Turkey and northern Iraq during the spring and summer months of 1991.

Detachments from the squadron would eventually begin participating in operation Operation Provide Promise in the Adriatic Sea during the Balkans crisis. A special purpose MAGTF, formed with a detachment of UH-1Ns, embarked aboard the aircraft carrier USS Theodore Roosevelt (CVN-71) in response to the continuing crisis in the Balkans. They also supported Operation Southern Watch in the Red Sea during renewed tensions with Iraq. This deployment marked the first time Marine Ground and helicopter assets were embarked aboard an aircraft carrier.

In October 1993, HMLA-167 would see be activated ito support Operation Support Democracy in expectation of contingency operations in Haiti. This operation was the first time Warrior aircraft executed an immediate embarkation aboard amphibious transport. Support for operations in the Caribbean Sea continued into 1994 while HMLA-167 was tasked to support counter drug operations within the United States. HMLA-167 won the CNO’s Safety Award for 1992 and 1993.

1994 saw squadron detachments support Operation Deny Flight off of Bosnia and assisted in the withdrawal of United States forces from Somalia.

On February 28, 1995, the squadron became the first HMLA on the East Coast to receive an AH-1W Super Cobra with the Night Targeting System. This FLIR and Laser designator was a giant leap in technology and capability for the Warriors.

The Global War on Terror

In 2003, HMLA-167 supported Marine Aircraft Group 29 by providing 9 aircraft and 17 personnel to HMLA-269 in support of Operation Iraqi Freedom.

In February 2004 HMLA-167 again deployed in support of Operation Iraqi Freedom. The squadron deployed 18 AH-1Ws, 9 UH-1Ns, and a small detachment of Marines in January aboard the USS Bataan. On the February 22, all 27 aircraft made the transit from Kuwait to Al Asad, Iraq. This was the home of HMLA-167 for the next six months. During Operation Vigilant Resolve in Fallujah in April 2004, HMLA-167 sent a detachment to help with surge operations from Al Taqaddum. The Warriors also operated from three forward operating bases (FOBs), FOB Al Qaim, FOB Korean Village and FOB Kalsu.

At the same time the Warriors were in Iraq, HMLA-167 had a detachment with the 22nd Marine Expeditionary Unit operating out of Afghanistan. As the Air Combat Element for the MEU, they operated out of Kandahar International Airport, outside of Khandahar, Afghanistan and flew in support of Marine, Army, Special Forces, and Afghan National Army operations in southwestern Afghanistan.

On August 24, 2004 the Warriors returned to MCAS New River. They fell back under the command of MAG-26. Having left their aircraft in Iraq for follow on units, the Warriors began to reassemble their squadron. The first aircraft delivered to 167 were former Unit Deployment Program (UDP) aircraft from Okinawa. These were dropped off by a Russian transport aircraft to MCAS Cherry Point. HMLA-167 would eventually accept and transfer over 111 aircraft during then next year.

On August 7, 2005 HMLA-167 departed MCAS New River and rejoined MAG-26 in Al Asad, Iraq. This trip to Iraq would be the third in less than three years for many of the Marines. HMLA-167 redeployed to MCAS New River on March 1, 2006. During this same period, HMLA-167 had a detachment with the 22nd Marine Expeditionary Unit that operated out of Al Asad during its 6-month deployment.

In August 2006, HMLA-167 departed MCAS New River after only 5 months at home to join MAG-16 in Al Asad, Iraq. HMLA-167 redeployed to MCAS New River in March 2007. The squadron has again deployed in support of Operation Iraqi Freedom leaving MCAS New River on March 11, 2008 for a seven month tour in Iraq.[2] After only a few months home, HMLA 167 split into two detachments the main body deploying to Iraq and a small four AH-1W cobra detachment deploying to Afghanistan on February 8, 2009 and the rest heading back to Iraq for a seven month deployment.

A unit citation or commendation is an award bestowed upon an organization for the action cited. Members of the unit who participated in said actions are allowed to wear on their uniforms the awarded unit citation. HMLA-167 has been presented with the following awards: