Aviation archaeology is a recognized sub-discipline within archaeology and underwater archaeology as a whole.[1] It is an activity practiced by both enthusiasts and academics in pursuit of finding, documenting, recovering, and preserving sites important in aviation history. For the most part, these sites are aircraft wrecks and crash sites, but also include structures and facilities related to aviation. It is also known in some circles and depending on the perspective of those involved as aircraft archaeology or aerospace archaeology and has also been described variously as crash hunting, underwater aircraft recovery, wreck chasing, or wreckology . 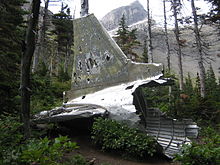 The remains of a Royal Canadian Air Force DC-3 Dakota crashed on January 19. 1946.

The activity dates to post-World War II Europe when, after the conflict, numerous aircraft wrecks studded the countryside. Many times, memorials to those involved in the crashes were put together by individuals, families, landholders, or communities.

As the activity grew in size and popularity, laws and regulations were created in some areas to counter problems created, such as trespassing and the disturbance of "war graves". In the United Kingdom, regardless of nationality or the date of crash, all military aircraft crash sites are protected in the Protection of Military Remains Act. Under the act, passed into law in 1986 it is a criminal offense for anyone without a license to tamper with, damage, move, remove or unearth any part of a crashed military aircraft.[2]

In the United States, the activity remains relatively unknown, and has little regulation. However, under the recently-passed 'Sunken Military Craft Act', it is illegal to disturb the wreck sites of U.S. Naval or any submerged military aircraft[3] and, under National Transportation Safety Board(NTSB) part 830, any aircraft whose accident cause is under investigation.[4][5] The U.S. Air Force has no policies against the hobby, unless human remains or weaponry remain unrecovered at the site. 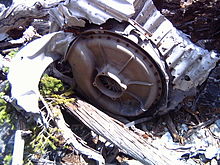 Crash sites vary in size and content; some may have fuselages, engines, and thousands of parts and debris. Other sites, like in civilian/commercial crashes, the Federal Aviation Administration and the NTSB will have almost all of the aircraft and debris removed; which makes aviation archaeology more challenging. Remains of military aircraft crash sites may also be removed by various aircraft restoration groups, particularly if the aircraft was found largely intact. There are different laws, rules, and procedures, depending on the jurisdiction or land ownership that will dictate the removal or non-removal of aircraft remains. Such agencies as US Forest Service, National Park Service, US Air Force, US Navy, US Army, US Marines, city and county governments, and land ownership will all participate in the outcome of accident remains.

In general, most recent-day (since the 1980s) aircraft crashes are removed entirely, due to environmental regulations, leaving very little to indicate the existence of a wreck. 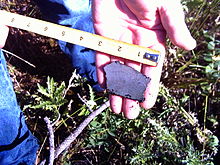 Also, foreign nations will have their set of laws and protocols.

For example, military crashes in Arizona originate from numerous air bases, past and present. Because of the warm and sunny weather, much of the U.S. Army Air Forces flight training was located in the state, both during and after WWII. Numerous air bases dotted the states - creating conditions for numerous training accidents.[6] Old abandoned US Army Air Corp auxiliary fields and converted fields to city municipal airports provides archaeological sites to be researched and investigated.[7]

Keeping a record of a crash site, such as photographs, maps, journals, logs, and all terrain and weather recordings are essential, i.e. the Glenwood Springs, Colorado, B-17 crash site[8] or the Tells Peak, CA, B-17 crash site.[9] 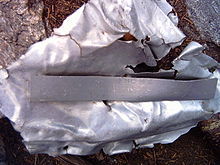 The internet is an ideal media for sharing, recording, educating, and promoting aviation archaeology as a hobby, as well as research projects for local and state aviation historical groups. For identifying aircraft type and manufacturer by part numbers[10] and manufacturing inspection stamps[11] can be analysed. From detailed GPS data & maps, to researching accident reports information, numerous resources help create a complete picture of the historic event. Accident reports, such as the official US Air Force Accident Report[12] Form 14 becomes the foundation of archaeology research. From there, newspaper articles, county clerk records, sheriff & coroner reports, and library records all aid an aviation archaeologist in their research.

The laws in the UK cover the remains of all aircraft which have crashed during military service (land or sea) are protected by the Protection of Military Remains Act 1986. This Act defines an offence of tampering with, damage to, moving, or unearthing the aircraft remains. Exceptions appy to those holding licences, which can be issued by the Secretary of State, authorising specific procedures to be performed.

For the wreck-chasing hobbyist there is a self-regulating body, the British Aviation Archaeological Council (BAAC),[13] which defines ethical standards of behaviour, coordinates activities and provides a forum for discussion for its member groups. Not all active groups in the UK are members of this organisation.

California has missile launch sites abandoned by the US Army.[14] Archaeological research includes these sites throughout the United States. Exploring and hiking around abandoned silos and sites may constitute trespassing as well as being dangerous.[15] Permission from current land owners or caretakers is imperative. Research and formal site investigations adds to the historical record of the Cold War. One such site is the Minuteman Missile National Historic Site[16] 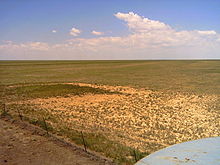 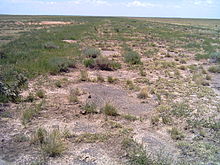 Arlington Airfield: E/W runway looking west, notice the large sections of asphalt and the vegatation changes along and on the runway, 2006

Abandoned airfields can yield much information of historic information about aviation and related industries. From civilian airfields to military airfields, aviation archaeologists can find, uncover, and recover a variety of artifacts, just to name a few: aircraft parts with serial numbers, equipment parts, asphalt or runway material, variety of contamination, structures and foundations, businesses and economics, to community and cultural changes. With the closure of many military airbase, the street system and runways become local expansion of city streets and business; one example is the community conversion of Lowry Air Force Base to a local residential, commercial, and educational environment. Other bases, like the Arlington Auxiliary Army Airfield reverted back to farming and ranching.

Underwater search and recovery is a complex aspect of aviation archaeology. Dive and recovery team have to do extensive research and planning before any recovery is performed. The aircraft site may be left as a memorial and not recovered. Once an aircraft has been located, an underwater survey is conducted before recovery operations begin. Many tasks are established and the research is a long process that requires the detailed review numerous and various sources of information. The complexities include a great deal of preparation, extensive training, precise planning, and very technical equipment and coordination. Conservation has often proved very difficult[18]

The Australian focus has been on underwater aviation archaeology,[19] partly as a result of the interest of the relatively large number of maritime archaeologists and shipwreck conservators in the field. This has resulted in numerous studies and reports, including some cross-fertilisation or ideas, theory and techniques with practitioners in other parts of the world, with a strong emphasis on the involvement of conservators.[20] Underwater aviation Archaeology commenced in Australia at the wrecks of the Dornier, Catalina and Sunderland Flying Boats destroyed by Japanese fighters at Broome in WWII. These lie, both in the intertidal zone, and in deeper water.[21] The study continued in Darwin in the Northern Territory with research and fieldwork at its series of submerged PBY Catalina wrecks,[22] Subsequently the study has spread to other regions in Australia, partly as a result of the Interest of Flinders University and its postgraduate student body.[23] While military aircraft remain the property of their respective governments unless delegated to a third party, submerged aircraft wrecks the wrecks at Broome in Western Australia once proved quite difficult to protect from unauthorised recoveries and looting. Those in Broome are now protected under the provisions of the 1990 Heritage of Western Australia Act.[24]

In America aviation archaeologists, crosstrained in other areas of study, are found in the employ of Joint POW/MIA Accounting Command (JPAC), traveling to former war zones throughout the world, to search for the remains of American servicemen and women that have been lost. Many of these losses involve aircraft mishaps in remote and difficult to reach areas. A group of volunteers, under the banner of "The BentProp Project", have pursued American military wreck sites and remains without disturbing them; their findings are forwarded to JPAC. In Australia and in some other parts of the world, where there are human remains involved, a tendency has been for the armed forces to secure the services of forensic anthropologists and crash investigators.

Professional aviation archaeologists may also be involved in the recovery of near-complete examples of wrecked or abandoned aircraft for profit. The clients of these professionals range from private individuals and aviation museums, to government agencies. Often these aircraft are in remote areas, which aids wreckage preservation.[25] Examples include Glacier Girl, a Lockheed P-38 that was successfully recovered from below the Greenland ice cap, and restored to airworthy condition, and Kee Bird, a B-29 Superfortress also abandoned on the Greenland ice cap, but severely damaged by recovery efforts.

In June 2009, the Wreckchasing/Aviation Archaeology Symposium, on the topic of wreckchasing and aviation archaeology was held in northern California at Moffett Field near Mountain View.[26]

On April 17 & 18, 2010, a group of aviation archaeology professionals, avocational and interested persons met in Broomfield, Colorado at the Rocky Mountain Metropolitan Airport for a two-day summit. The attendees came from Arizona, California, Canada, Colorado, Illinois, New Mexico, and Oklahoma representing the interests of wreck chasers, aircraft recovery teams, and avocational archaeologists. The North American Aviation Archaeology Summit was conducted and sponsored by the North American Institute of Aviation Archaeology[27] and Colorado Aviation Historical Society's Aviation Archaeology Program's Staff. Some of the attendees had also attended the 2009 Symposium at Moffett Field. The group discussed all aspects of aviation archaeology, wreck chasing, recovery, modern archaeology techniques, ethics, education, training, hobby enthusiasts, and professional interests. Breakout sessions, consensus, and voting occurred to determine the Summit outcome. The Summit created an organization initially respresenting the United States and Canada, now to be called: Aviation Archaeology and Heritage Association, and with full agreement to expand and include all nations interested in aviation archaeology and wreck chasing.[27][28]