A Bonded warehouse is a building or other secured area in which dutiable goods may be stored, manipulated, or undergo manufacturing operations without payment of duty.[1] It may be managed by the state or by private enterprise. In the latter case a customs bond must be posted with the government. This system exists in all developed countries of the world.

Upon entry of goods into the warehouse, the importer and warehouse proprietor incur liability under a bond. This liability is generally cancelled when the goods are:

While the goods are in the bonded warehouse, they may, under supervision by the customs authority, be manipulated by cleaning, sorting, repacking, or otherwise changing their condition by processes that do not amount to manufacturing. After manipulation, and within the warehousing period, the goods may be exported without the payment of duty, or they may be withdrawn for consumption upon payment of duty at the rate applicable to the goods in their manipulated condition at the time of withdrawal. In the United States, goods may remain in the bonded warehouse up to five years from the date of importation.[2] Bonded warehouses provide specialized storage services such as deep freeze or bulk liquid storage, commodity processing, and coordination with transportation, and are an integral part of the global supply chain. 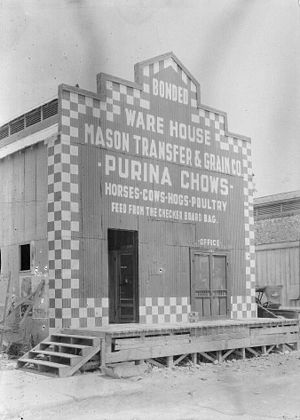 Previous to the establishment of bonded warehouses in England the payment of duties on imported goods had to be made at the time of importation, or a bond with security for future payment given to the revenue authorities. The inconveniences of this system were many:

To obviate these difficulties and to put a check upon frauds on the revenue, Sir Robert Walpole proposed in his "excise scheme" of 1733, the system of warehousing for tobacco and wine. The proposal was unpopular, and it was not till 1803 that the system was actually adopted. By an act of that year imported goods were to be placed in warehouses approved by the customs authorities, and importers were to give bonds for payment of duties when the goods were removed.

The Customs Consolidation Act 1853 dispensed with the giving of bonds, and laid down various provisions for securing the payment of customs duties on goods warehoused. These provisions are contained in the Customs Consolidation Act 1876, and the amending statutes, the Customs and Inland Revenue Act 1880, and the Revenue Act 1883. The warehouses are known as "king's warehouses," and by s. 284 of the act of 1876 are defined as "any place provided by the crown or approved by the commissioners of customs, for the deposit of goods for security thereof, and the duties due thereon."

By s. 12 of the same act the treasury may appoint warehousing ports or places, and the commissioners of customs may from time to time approve and appoint warehouses in such ports or places where goods may be warehoused or kept, and fix the amount of rent payable in respect of the goods. The proprietor or occupier of every warehouse so approved (except existing warehouses of special security in respect of which security by bond has hitherto been dispensed with), or some one on his behalf, must, before any goods be warehoused therein, give security by bond, or such other security as the commissioners may approve of, for the payment of the full duties chargeable on any goods warehoused therein, or for the due exportation thereof (s. 13).

All goods deposited in a warehouse, without payment of duty on the first importation, upon being entered for home consumption, are chargeable with existing duties on like goods under any customs acts in force at the time of passing such entry (s. 19). The act also prescribes various rules for the unshipping, landing, examination, warehousing and custody of goods, and the penalties on breach. The system of warehousing has proved of great advantage both to importers and purchasers, as the payment of duty is deferred until the goods are required, while the title-deeds, or warrants, are transferable by endorsement.

While the goods are in the warehouse ("in bond") the owner may subject them to various processes necessary to fit them for the market, such as the repacking and mixing of tea, the racking, vatting, mixing and bottling of wines and spirits, the roasting of coffee, the manufacture of certain kinds of tobacco, &c., and certain specific allowances are made in respect of waste arising from such processes or from leakage, evaporation and the like.