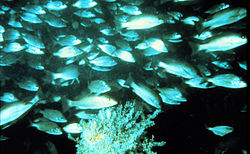 A bergall or cunner or conner, Tautogolabrus adspersus, is a saltwater fish found in the western Atlantic. It is edible and its musky taste is considered a delicacy by some. Specimens may grow to 12 inches though most range from 4-10. Often bergalls are found mixed in with black fish (Tautog), living on or near the same structures. Much of the food eaten by those bergalls living among Black fish are the leftovers from the Black's prey. Cunners can be distinguished from the Tautog by their pointed snout. Cunners are generally smaller, so are usually thrown back by anglers who think they've caught a "short" Tautog. Cunners are pesky bait stealers, and anglers who target them use the smallest hooks possible. They are used as bait when fishing offshore, or filet for use inshore or as chum. They prefer to live near structures, such as sunken boulders. In past years, they have been important commercial fish, but now are considered pests. Cunners can be confused with Black Seabass and other Grouper, as well as Tautogs for their ability to change color.