Downhill
This article is about the skiing event. For other uses, see Downhill (disambiguation).

Downhill is an alpine skiing discipline. The rules for the Downhill were originally developed by Sir Arnold Lunn for the 1921 British National Ski Championships.

"Downhill skiing" is also commonly a term synonymous with "alpine skiing" to denote the sport and recreational activity of alpine skiing in general.

The Downhill discipline involves the highest speeds and therefore the greatest risks of all the alpine events. Racers on a typical international-level course will exceed speeds of 130 km/h (81 mph) and some courses, such as the notable Lauberhorn course in Wengen, Switzerland, and the Hahnenkamm course in Kitzbühel, Austria, speeds of up to 150 km/h (93 mph) in certain sections are expected. Competing in the Downhill event requires of racers considerable strength and high speed technical expertise (ability to pump the jumps etc.), in contrast to the technical expertise required in lower speed slalom events (Super G, Giant Slalom & Slalom).

A typical Downhill course begins at or near the top of the mountain on a piste that is closed off to the public and groomed specially for the race. Gates (which are always the same colour in Downhill, in contrast to the other alpine skiing disciplines) are quite close together, but not in sight of each other. The courses in the world's most notable ski areas are well-established and do not change a lot from year to year.

The course is designed to challenge the best skiers in a variety of ways: skiing at high speeds, through challenging turns, shallow dips, flats, and small airs (jumps). A good course will have all these elements in it, as well as some jumps intended to complicate matters and thrill both the racer and the spectators. 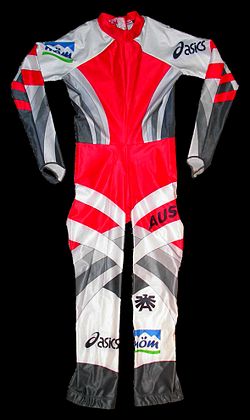 Equipment for the Downhill is different from the alpine events that are lower-speed. Skis are 30% longer than those used in Slalom, for more stability at high speed. They usually have rounded, low-profile tips rather than pointed tips. Ski poles are bent so as to curve around the body as the racer stays in a "tuck position" and may have aerodynamic, cone-shaped baskets. As in other alpine disciplines, Downhill racers wear skin-tight suits to minimize drag, and helmets are mandatory.

In all forms of Downhill, both at a local youth-level as well as the higher FIS international level, racers are allowed extensive preparation for the race, which includes daily course inspection and discussion with their coaches and teammates as well as several practice runs before the actual race. Racers do not make any unnecessary turns while on the course, and try to do everything they can to maintain the most aerodynamic position while negotiating turns and jumps.

Unlike Slalom and Giant Slalom, where racers have two combined times, in the Downhill, the race is a single "run." Times are typically between 1:30 (1 minute, 30 seconds) and 2:30 for World Cup courses and must be over 1 minute in length to meet international minimum standards. Tenths and hundredths and, occasionally, thousandths of seconds count: World Cup races and Olympic medals have sometimes been decided by as little as one or two hundredths of a second, and ties are not unheard of.

Safety netting and padding are placed in worrisome areas where race officials anticipate crashes. Despite these safety precautions, the ski racing community is well aware of the inherent risks in Downhill skiing, for it is possible for racers to suffer serious injury or death while practicing or competing. Three Downhill-related deaths on the World Cup in recent years were those of Austrians Ulrike Maier in 1994 and Gernot Reinstadler and Frenchwoman Régine Cavagnoud in 2001. Also in 2001, Swiss downhiller Silvano Beltrametti was paralyzed in a high-speed crash.