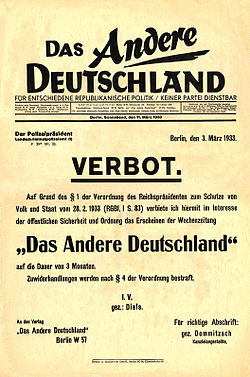 Das Andere Deutschland's final issue, announcing its own prohibition (Verbot) by the police authorities on the basis of the Reichstag fire decree

The Reichstag Fire Decree (German: Reichstagsbrandverordnung) is the common name of the Decree of the Reich President for the Protection of People and State (German: Verordnung des Reichspräsidenten zum Schutz von Volk und Staat) issued by German President Paul von Hindenburg in direct response to the Reichstag fire of 27 February 1933. The decree nullified many of the key civil liberties of German citizens. With Nazis in powerful positions in the German government, the decree was used as the legal basis of imprisonment of anyone considered to be opponents of the Nazis, and to suppress publications not considered “friendly” to the Nazi cause. The decree is considered by historians to be one of the key steps in the establishment of a one-party Nazi state in Germany.

Hitler had been appointed Chancellor of Germany only four weeks previously, on 30 January 1933, when he was invited by President von Hindenburg to lead a coalition government. Hitler’s government had urged von Hindenburg to dissolve the Reichstag and to call elections for 5 March.

On the evening of 27 February 1933 — six days before the parliamentary election — fire broke out in the Reichstag chambers. While the exact circumstances of the fire remain unclear to this day, what is clear is that Hitler and his supporters quickly capitalized on the fire as a means by which to speed their consolidation of power. Seizing on the burning of the Reichstag building as the supposed opening salvo in a communist uprising, the Nazis were able to throw millions of Germans into a convulsion of fear at the threat of Communist terror. The official account stated:

The burning of the Reichstag was intended to be the signal for a bloody uprising and civil war. Large-scale pillaging in Berlin was planned for as early as four o’clock in the morning on Tuesday. It has been determined that starting today throughout Germany acts of terrorism were to begin against prominent individuals, against private property, against the lives and safety of the peaceful population, and general civil war was to be unleashed…[1]

The decree was improvised on the day after the fire (28 February) after discussions in the Prussian Ministry of the Interior, which was led by Hermann Göring, and was then brought before the Reich cabinet. In the ensuing discussions, Hitler stated that the fire made it now a matter of “ruthless confrontation of the KPD” and shortly thereafter, President von Hindenburg signed the decree into law.

The decree, officially the Verordnung des Reichspräsidenten zum Schutz von Volk und Staat (Order of the Reich President for the Protection of People and State), invoked the authority of Article 48 of the Weimar Constitution which allowed the President of Germany to take any appropriate measure to remedy dangers to public safety.

The decree consisted of six articles. Article 1 suspended most of the civil liberties set forth in the Weimar Constitution, including freedom of the person, freedom of expression, freedom of the press, the right of free association and public assembly, the secrecy of the post and telephone, not to mention the protection of property and the home. Articles 2 and 3 allowed the Reich government to assume powers normally reserved for the federal states. Articles 4 and 5 established draconian penalties for certain offenses, including the death penalty for arson to public buildings. Article 6 simply stated that the decree took effect on the day of its proclamation.

Text of the decree

The preamble and Article 1 of the Reichstag Fire Decree show the methods by which the civil rights protections of the Weimar Republic’s democratic constitution were abolished in a legal manner by the Nazis:

The decree was not accompanied by any written guidelines from the Reich government; this omission gave wide latitude in interpreting the decree to Nazis like Göring, who as Prussian interior minister was in authority over the police forces in Germany’s largest province. The Länder not yet in the Nazis’ grasp largely restricted themselves to banning the Communist press, Communist meetings and demonstrations, and detaining leading KPD officials. In Prussia, however, summary arrests of KPD leaders were common, thousands were imprisoned in the days following the fire, and the total number of arrests in Prussia on the basis of the Reichstag Fire Decree in the two weeks following 28 February is believed to be in the vicinity of 10,000. Göring had actually employed such tactics even before the decree, only to have them thrown out by the courts — a check that no longer had any effect with the decree in place.

Among the German communists arrested on the basis of the Reichstag Fire Decree was KPD chairman Ernst Thälmann; while KPD founding members Wilhelm Pieck and Walter Ulbricht — later to be leaders in postwar East Germany — were among those who escaped arrest and lived in exile.

Göring issued a directive to the Prussian police authorities on 3 March, stating that in addition to the constitutional rights stripped by the decree, “all other restraints on police action imposed by Reich and Land law” were abolished “so far as this is necessary … to achieve the purpose of the decree.” Göring went on to say that

In keeping with the purpose and aim of the decree the additional measures … will be directed against the Communists in the first instance, but then also against those who co-operate with the Communists and who support or encourage their criminal aims… I would point out that any necessary measures against members or establishments of other than Communist, anarchist or Social Democratic parties can only be justified by the decree … if they serve to help the defense against such Communist activities in the widest sense.

The Reichstag Fire Decree remained in force for the duration of the Nazi era, allowing Hitler to rule under what amounted to martial law. Along with the Enabling Act, it formed the legal basis for Hitler’s dictatorship. Thousands of Hitler’s decrees were issued under its authority — a major reason why Hitler never sought to abolish the Weimar Constitution, though it no longer had any substantive value after the passage of the Enabling Act.