Love Is Here and Now You're Gone

Love Is Here and Now You're Gone

Infobox Single
Name = Love Is Here and Now You're Gone 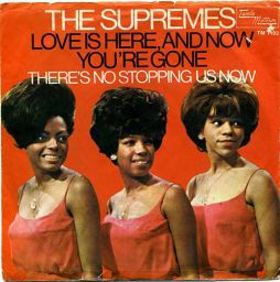 The song, which depicts a relationship in the beginning stages of breakup ("You persuaded me to love you/And I did/But instead of tenderness/I found heartache instead"), features several spoken sections from lead singer , who delivers her dialogue in a dramatic, emotive voice. Matching the song's drama influences is an instrumental track, featuring a prominent and strings, which recalls both a and 's recently popularized "Baroque rock."

"Love is Here" was primarily recorded in , thousands of miles away from Motown's regular recording studio, because Holland-Dozier-Holland wanted a different feel for the record than the typical Supremes sound. Lyricist names "Love is Here" as his favorite Supremes song.

A number-one hit on both the US pop and R&B charts, it was also a #6 hit in the United World Chart. "Love Is Here and Now You're Gone" was the second single from the Supremes' album "".

* "Love Is Here and Now You're Gone" was covered by 13-year-old Michael Jackson on his solo debut album, "Got to Be There." On the 45 version, it was the B-side of his number two smash, "Rockin' Robin."

* Lead vocals by
* Backing vocals by , Mary Wilson, and session singers
* Instrumentation by area studio musicians
* Written by , , and
* Produced by Brian Holland and Lamont Dozier