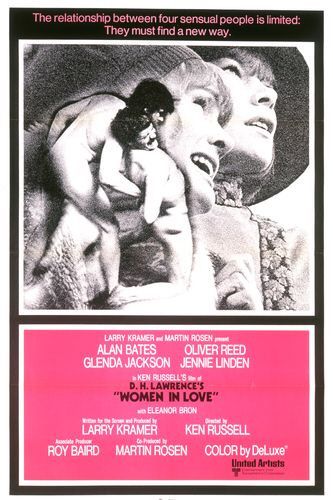 
"Women in Love" is a 1969 British film directed by which tells the story of the relationships between men and women during the early part of the 20th century. It stars , , and . The movie was adapted by from the novel of the same name by .

Glenda Jackson won the . She was the first actress to win the award for a role which had a nude scene. The movie was nominated for Best Cinematography, Best Director and Best Writing, Screenplay Based on Material from Another Medium.

The movie is famous for an extended scene in which Alan Bates and Oliver Reed wrestle in the nude. According to the , both actors were initially apprehensive about filming the scene due to the insecurity they had about being naked in front of each other. Russell had to assure them that the set would be off-limits and that there would be no rehearsal. Because of this scene, which caused had to be altered to get an X rating in Britain, the film is considered along with 's "" (1969), to be among the first mainstream movies to feature male frontal nudity [ [http://www.imdb.com/title/tt0066579/trivia IMDB trivia] ] .